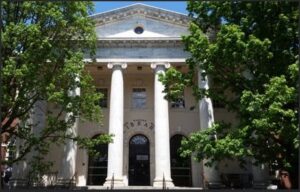 From the first comment of “Don’t burn our past!” a June 27th public hearing to discuss striking the names of the two Founding Fathers from the Jefferson-Madison Regional Library turned into verbal fireworks.

Two camps quickly formed. The first five speakers defended Mr. Jefferson, who most realize needs no defense given his revolutionary proclamation that “all men are created equal,” endowed by God with the inalienable rights of “life, liberty and the pursuit of happiness.” This clarion call inspired freedom throughout the Western world and now around the globe.

“It was Jefferson who pushed to free all people,” said one speaker.

“Mr. Jefferson loved books,” said another. “His books began this library in 1823.”

David Plunkett, director of the library, and Thomas Unsworth, president of its board of trustees, allowed comments through the meeting’s Zoom link, with no apparent time limits.

Cynthia Alling, a long-time resident of Charlottesville, discussed in a soft and kind voice how Jefferson was “the saving grace of the Library of Congress” after the War of 1812, when the British burned the White House, which at the time contained the Library of Congress. “It was Thomas Jefferson who in 1815 gave his books for the new Library. My emphasis is on Jefferson and the Library.” Afterward, she quietly said to one of the women pushing for the name change, “We all need to get along.”

Then the other side spoke. Myra Anderson, a fellow at the UVa Equity Center and member of Reclaimed Roots Descendants Alliance, a Charlottesville-based group of descendants of enslaved laborers, stood up to say, “It is time to change so it will be fair for everyone…. Everything is changing, so we should do this because it is being done everywhere.” An entire row of supporters stood with her, some holding homemade signs.

Also firing back, a young educator “of the community” of Charlottesville and Albemarle stated, “Black and brown people suffer trauma from coming in here. … I can’t bring my students to this library…. I don’t feel acknowledged!” She was very angry and wore a mask.

One Zoom caller, identified only as “Christine” who had been recruited by the Reclaimed Roots Facebook plea to speak, offered, “I have a mixed-race marriage. I feel the name does not represent myself, my son, or my husband.”

A female Unitarian Universalist stated (incorrectly) that “Jefferson was not a fan of religion,” and, “We have a chance – Black America – to make a change. We want a library system that actually aligns with our new changes.”

Not quite the grand finale but close to it was retired University of Virginia Professor Bob Turner who calmly but forcefully made fact-based comments pointing out Jefferson’s beliefs.

“I am saddened because there is a lot of agreement here,” he said. Slavery was a horrible and indefensible institution. But slavery existed around the world in the 1700s, and exists even today in some areas of Africa. Jefferson did not create the institution, and he was a leader in restricting it. In 1778, Turner said, “Jefferson authored the law that made it unlawful to import new slaves into Virginia.” Jefferson also “drafted a bill calling for the emancipation of all slaves born in Virginia after the year 1800, which was never introduced because the votes weren’t there.”

Jefferson believed liberty was a “gift of God,” Turner said, but it was illegal at the time to just turn enslaved laborers out into the countryside without any way to feed, clothe or protect themselves.

Toward the end of the hearing, Plunkett stated that the library board does not have the authority to unilaterally change the organization’s title. The “Jefferson-Madison” name is part of a 1974 contract among the jurisdictions in the regional library system, which includes the city of Charlottesville and Albemarle, Nelson, Greene and Louisa counties. Plunkett noted that changing the name would require amending the contract with the approval of the governing boards of each of these localities, with any one city or county effectively having “veto power.” He further pointed out that the boards of supervisors in Louisa and Greene counties both have passed resolutions opposing the name change.

“We can work creatively” to change the name, Plunkett said.

Michael Powers, an Albemarle County member of the regional library board, noted that the board received over 100 written comments, one of which stated, “No matter how bad things may have been for your ancestors, you should thank God and kiss the ground that you live here. And you live in freedom largely due to Jefferson and Madison.”

The legal obstacles to the name change appeared to infuriate some library board members. “It feels like they are trying to corner us into a box,” said trustee Lisa Woolfolk, who represents Charlottesville. She also criticized the Greene and Louisa supervisors for passing the resolutions and questioned the locality’s commitment to a promoting a “diverse” community.

This prompted a rejoinder near the end of the hearing from Willie Gentry, a member of the Louisa Board of Supervisors, who had not spoken earlier. He said the Louisa board was fully aware of the positions put forth by the two sides at the hearing. “Did I hear any good reasons to change our resolution? To be honest, I did not.” (The Louisa board passed its resolution 7-0 on June 6.)

Thomas Unsworth, whose term as president of the regional library board concluded June 30, raised the possibility that the board would still fight for a name change, despite the “uphill battle,” as Plunkett described the move for alteration.

“I don’t believe that removes our voice from this process,” he said. “We are the Board of Trustees here. We do still have to be considered going forward to try to enact a change if the board so chooses.”

The next steps are unclear. The library board will receive more comments at its next meeting, now scheduled for July 25. Comments can be sent to David Plunkett at director@jmrl.org.

Ann McLean serves on the board of The Jefferson Council.

This entry was posted in Culture wars, Virginia history and tagged Ann McLean. Bookmark the permalink.