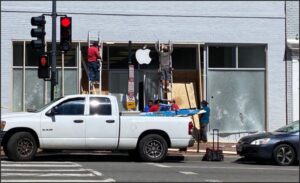 Mayor Muriel Bowser — elected to a third term in a June 21 primary where only 27% of registered voters voted, and only 14% voted for her — is lamenting the bus loads of illegal immigrants that Texas politicians are shipping to D.C. Apparently DC homeless shelters are full.

Maybe she should be happy though?

Walking along M Street NW from the Ritz Carlton Hotel in West End, past the Four Seasons in Georgetown, to the Francis Scott Key bridge that takes one to Arlington, Virginia, was usually a pleasant stroll through one of DC’s most upscale shopping districts.

But if you take this walk today, one thing you will notice is that every fourth or fifth storefront is closed, for lease, papered over, or boarded up.

When the city was still mask-mandated and locked down – and other towns and cities were on fire, marred by rioting, or occupied by “autonomous zones” – this might have seemed normal. D.C. isn’t locked down anymore. Yet Georgetown and other areas remain surprisingly vacated.

D.C. is shrinking.
Insurrectionists will no longer need to come here to protest the deep state or the political class. If they just wait until 2050, at the current rate of de-population, Washington, D.C.. will cease to exist.

In local news, and on local platforms like Nextdoor, you can see the many problems D.C. is having. Read local residents’ complaints: car jackings; pet owners having their dogs stolen at gunpoint; large homeless encampments on  green space; vagrants and the mentally ill defecating in resident’s yards or on public sidewalks; children on school playgrounds throwing rocks at cars as they drive by; people shooting at cats sleeping on the window ledges of apartment buildings; a naked man walking down 18th street past restaurants in broad daylight; all terrain vehicles noisily racing down urban streets; 2 a,m, fireworks in residential neighborhoods like Kingman Park; constant breaking of car windows and thefts from cars (leading the Georgetown Citizen’s Association to put up permanent warning signs); panhandlers and raving lunatics, some spouting genocidal racism, on Metro platforms; gropers and other sexual harassers on buses and subways. If you read Nextdoor for Arlington, VA, you don’t find the same excitement.

It’s easy to see why — even aside from lockdowns and mask and vaccine mandates — people are leaving D.C.

D.C. elected officials don’t talk about this. Delegate Eleanor Holmes Norton had a July 4th tweet with a beautiful photo of Independence Day fireworks, noting that “nearly 700,000” in D.C. do not have the full representation American citizens fought for in creating a constitutional republic. 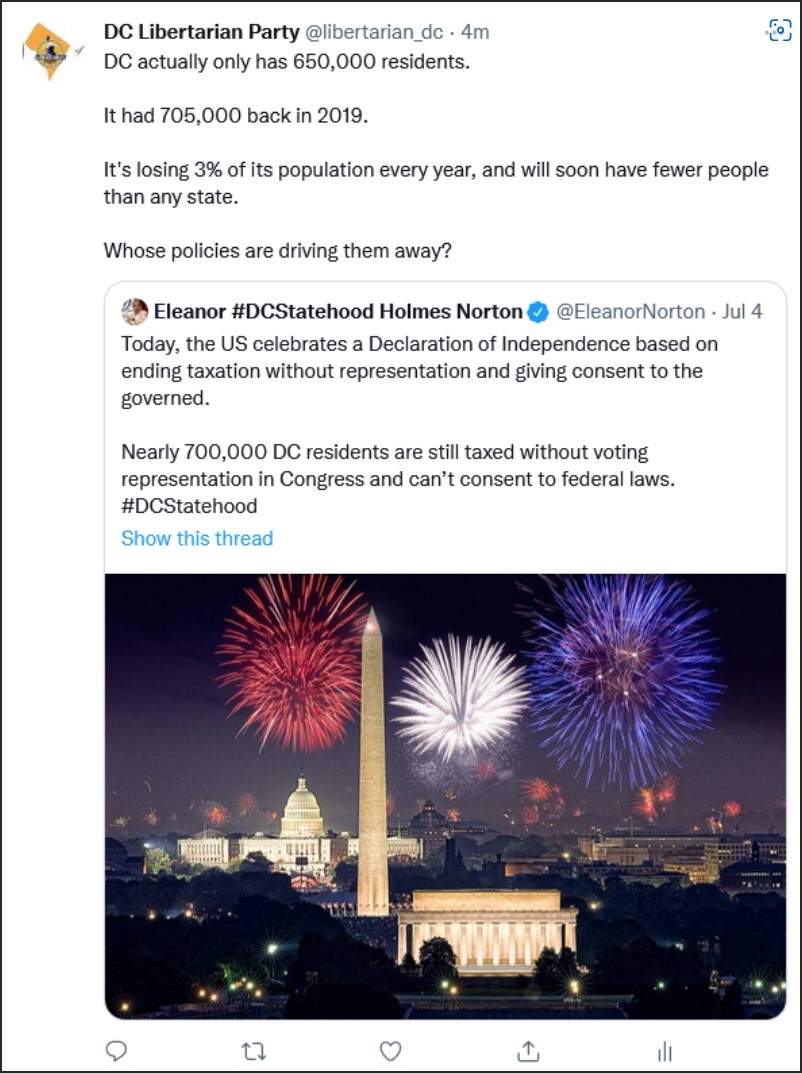 It’s not just that her numbers are out of date. One of the arguments for D.C. Statehood — making DC the 51st state — is that D.C. has a larger population than some states that have two Senators. But soon this will not be true. While D.C. was shrinking from 2019 to 2022 not only nearby urban areas — like Alexandria, Virginia or Philadelphia — grew, but so did those states that the D.C. Statehood activists often cite. At current rates D.C. will have a smaller population than Vermont in a year or two, and a smaller population than Wyoming in three or four.

You’d think D.C. politicians and Statehood activists would argue that the absence of full representation in the Senate is what is driving people to leave D.C. But instead they blamed COVID (which Philadelphia and Alexandria and Vermont and Wyoming also had).

When the D.C. Libertarian Party tweeted out a warning about the shrinking D.C. population, and asked that we consider what policies were leading people to leave, Congresswoman Eleanor Holmes Norton’s communications staffer also blamed COVID. When the Libertarian account tweeted out the infamous Roll Call video of Delegate Norton hitting other cars while she attempted to park, asking if the staffer thought it was Norton’s bad driving leading residents to flee, the comm staffer replied that the question was “ugly” and then tweeted something she has since deleted, saying she had called the national Libertarian Party office and spoken with its Executive Director about the DC LP.  “Have a nice evening!” she snarked. Two or three of her friends attempted a rather weak ratioing. Then two days later twitter suspended the Libertarian account (libertarian_dc) claiming it was “impersonating” some imaginary real D.C. Libertarian Party Twitter account.

That’s one way to NOT discuss which policies of our incumbent political class — incumbents who were just re-elected in the primary with ONLY 27% of DC registered voters turning out to vote for OR against them — are driving DC’s residents away. But for the 73% of D.C. voters who did not find anyone worth voting for in their party’s primary, for D.C. residents who want no more lockdowns and no more mandates, for D.C .residents who want free speech, for D.C. Democrats who didn’t vote for the incumbents in the primary and don’t want to vote for them in the general election, there is an alternative. They should vote Libertarian.

This entry was posted in Demographics and tagged Bruce Majors, Social breakdown. Bookmark the permalink.