Inexplicable — What Could Be Causing the Surge in Violence? 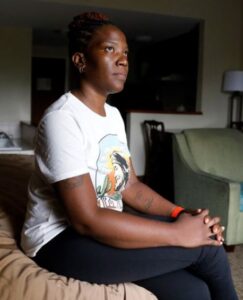 Portsmouth resident Ebony Pope was hospitalized after being struck by random gunfire. Still suffering from some nerve damage and pain with digestion, she avoids crowds and standing by windows. Photo credit: Daily Press

Wow, you know the crime surge is getting bad when the wokest newsroom in the Commonwealth — which apologized for the whiteness of the reporters writing a series about continued racial segregation in Hampton Roads — starts publishing articles about it.

What’s hilarious about today’s article in The Virginian-Pilot is that reporters and the experts they quoted are baffled about what might be causing the crime wave. Could it be tied to COVID? High unemployment? Social anxiety? Too much free time? It’s such a mystery!

The numbers are clear enough. Sentara Norfolk General, the region’s Level 1 trauma center “pulled out more bullets, stitched more stab wounds and treated more assault victims than in recent history,” the Pilot tells us. In 2020 — a year mostly spent in lockdown, the article notes — the hospital saw 38% more violence-related trauma patients than the year before. Patients with gunshot wounds jumped from 328 to 466. That may be just a bad weekend by Chicago standards, but its a stark reversal from two or three decades of declining violence in Hampton Roads.

The numbers for 2021 — a year when COVID receded and the lockdown eased, I would add — are even worse.

“We did not anticipate this at all,” said Dr. Jay Collins, chief of trauma at Norfolk General and a surgery professor at Eastern Virginia Medical School. “In the last year, we’ve had a huge jump, and I personally don’t think it’s just COVID. It seems like we’re seeing more assault-type weapons.”

Hmmm. Collins doesn’t think it’s “just COVID.” That’s very astute, considering the fact that the spike in violence is not occurring uniformly across the country but is concentrated in big cities and somehow seems to afflict, in the Pilot’s words, mainly “Black men in their 20s.”

Could the jump in violence be attributable to assault weapons? The semi-automatic rifles, the article explains, “spit out ammunition at high velocity” and sometimes use bullets that explode into pieces on impact. “It’s in some ways like getting shot with several bullets, even though you were only shot with one,” the newspaper quotes Collins as saying.

The Pilot also quotes Christina Mancini, a Virginia Commonwealth University professor, who subscribes to the idle-hands-are-the-devil’s-playground school of criminology. Violent crime tends to be committed by younger men and boys. Because of the pandemic’s impact on schools and social activities, many have less to do. “Combine lost jobs, free time, bills to pay and a whole lot of anxiety, that can lead to trouble,” Manicini said.

Oddly, the violence continues on the upswing even as people go back to work, have less free time, have more money to pay their bills, and experience less economic anxiety. Criminologists will likely “puzzle” over the recent uptick for a while, the Pilot opines.

If only there were something to explain the fact that the number of black murder victims in Virginia jumped by 97, while the number of whites increased only 20, and the number of “others” actually decreased in 2020. Could something have happened  — changes in political rhetoric, stories in the media, new laws to reduce mass incarceration, changes in police practice, ANYTHING — that might have increased the level of social turmoil in African-American communities?

I’m drawing a blank. I can’t think of a thing.

Maybe The Virginian-Pilot eventually will figure it out for us.