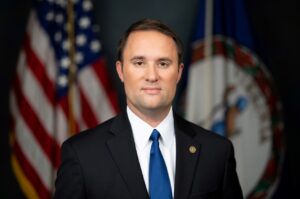 Attorney General Jason Miyares has taken another step to politicize his office and the enforcement of election laws. As reported by the Virginia Mercury, Miyares has announced the formation of a 20-member “Election Integrity Unit.” The purpose of the unit is to ensure the “legality and purity” of elections.

There has been no evidence, or even credible allegations, of serious fraud in Virginia elections. However, the Attorney General seems to feel that there is a need to have 20 members of his staff working on prosecuting election fraud.

In truth, this is just a political stunt. This “unit” will not have its own budget. The members of the “unit” will not be dedicated to investigating and prosecuting fraud. Rather, the unit will consist of staff members who work on other issues, in addition to election issues. In other words, election fraud will be an incidental part of their jobs.

Earlier this week, the Attorney General’s office announced the indictment of the former Prince William County registrar on several felony counts of corrupt conduct as an election official and making a false statement by an election official. Few details are available, although the current registrar told The Washington Post that he had noticed some “discrepancies” in the records after the former registrar had resigned, and reported them to the Attorney General’s office. Those discrepancies “potentially affected a small number of votes in the 2020 election.”

Miyares obviously seized upon this case to announce the formation of an “Election Integrity Unit” to do what his office is already empowered by law to do.

Even more troubling than Miyares’ actions is the statement by the Republican Party of Virginia. First, the party praises the establishment of the Election Integrity Unit as a way to “restore confidence in our democratic process.” This is rich since it has been the constant reiteration of the Big Lie by the titular head of the national Republican Party and countless other Republicans, including Virginians, that has done much to undermine that confidence.

Lastly, the statement declares, “Today’s announcement [regarding the Election Integrity Unit] is a continuation of Virginia Republicans’ commitment to secure elections.” What are the implications of this statement? That Democrats are not committed to secure elections? That the role of the Attorney General is to do the Republican Party’s bidding?

But, there is no need to worry. In accordance with Virginia law, in January, Republicans will assume the majority on local electoral boards. I assume that we then will be informed that the Attorney General has dismantled his “Election Integrity Unit,” seeing no further need for it.

This entry was posted in Electoral process, Politics and tagged Dick Hall-Sizemore. Bookmark the permalink.