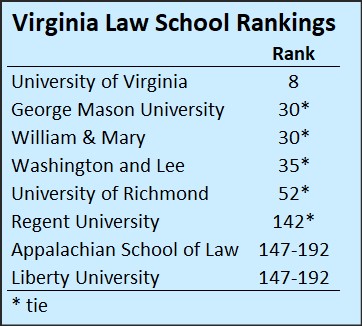 Virginia is known for the number and quality of its law schools. Eight law schools are located in the state, making almost one for every 1.1. million residents. Nationally, there are 192 law schools for 330 million people, or roughly one for every 1.6 million. Woohoo, we have lawyers out the wazoo!

The University of Virginia is widely held to be the most prestigious of the Virginia law schools, holding an 8th place ranking in the latest U.S. News & World-Report survey. The George Mason University and William & Mary law schools are highly regarded as well, tying for No. 30 on the list. Washington & Lee and University of Richmond (almost) also place in the Top quartile.

One can argue whether college and university rankings are worthwhile or pernicious, but there’s no question that they confer bragging rights and drive applications. Sadly, Michael Conklin, a professor of business law at Angelo State University, has found that the rankings are influenced by the political leanings of the law school deans and select faculty whose views are incorporated into the “peer rankings” of law school reputation.

The peer ranking is assigned a 25% weight in the overall ranking formula. Writing in “Law School Rankings and Political Ideology: Measuring the Conservative Penalty and Liberal Bonus with Updated 2023 Rankings Data,” Conklin argues that in our politically polarized era, partisan views affect those peer evaluations. Comparing peer-review scores with overall scores of the 10 most conservative law schools with those of the 10 most liberal, he finds that a partisan or ideological penalty drives down the most conservative schools 14.4 slots in the national ranking and gives the most liberal schools a 9.6-place bump.

The implication is that GMU’s Antonin Scalia Law School, ranking 4th from the top of Conklin’s list of most conservative law schools in the country, would rank significantly higher in the U.S. News & World-Report ranking if subjective reputational criteria were excluded.

The Regent University law school ranks 142 nationally, and Liberty University ranks toward the bottom of the U.S. News scale, residing in an undifferentiated mass of the bottom 45 schools that U.S. News does not rank individually. Most likely the two schools, which are part of universities founded by fundamentalist Christians, would qualify as “conservative,” and it’s a good bet that their rankings are dragged down by the peer reviews as well.

Conklin cites a 2013 finding that 82% of law school professors were Democrats while only 11% were Republicans. A 2015 Harvard Journal of Law & Public Policy study determined that the disparity between conservative and liberal law professors was due to partisan or ideological discrimination. Conservative faculty members were likely to be more credentialed, as measured by service with former Supreme Court clerks, participation in law review, and the number of articles published.

Political polarization — and skewing of law school reputation — appears to have gotten worse in the past two years, Conklin says.

When he first conducted his study in 2020, Conklin found a 20.8-point spread between the most conservative and most liberal schools. In 2020, the spread has increased to 24 points.

The harm from discrimination against conservatives extends beyond the harm done to conservatives who can’t get jobs as law professors. Discrimination provides an inferior legal education, Conklin argues. When a majority of court districts have Republican-appointed judges, law school students pay a high price for not being exposed to conservative thought. Understanding the best arguments from the conservative side would better equip liberals to argue for liberal causes. Likewise, he suggests, “most people would likely prefer to hire a lawyer who is familiar with — and therefore better equipped to address — conservative arguments and conservative judges.”

The solution, suggests Conklin, is simple. Stop including peer review scores in the rankings and rely upon objective measures such as student-faculty ratio, average student debt, per-pupil spending, and the rate of passing the bar.