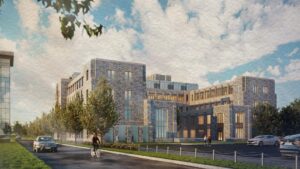 One would think that more than $2 billion in the last two biennial budgets would be enough to satisfy the capital needs of higher ed, at least for a while. But, as my colleagues in the Department of Planning and Budget were prone to say, “There is no satisfying higher ed.”

The ink was hardly dry on the governor’s signature on the new budget bill when higher ed institutions submitted capital budget requests totaling $3.2 billion for the amended budget to be submitted to the 2023 General Assembly, of which $2.6 billion would come from the general fund or be supported by general fund-backed bonds.

Here are the totals of projects submitted by each school:

Only a small fraction of this total will be approved and funded, of course, but the list does demonstrate the appetite of higher ed institutions for construction funding. The list includes new buildings, renovation of existing buildings, and major infrastructure projects. (For anyone wishing to see the details of the specific requests, they can be found here. Clicking on the project title will take you to all the details.)

One aspect that is readily apparent is the escalating cost of higher ed buildings.  Probably the most expensive state capital project authorized is the replacement of Central State Hospital in Petersburg at an estimated $318.5 million. (There are some bigger ones in the pipeline, which will be the subject of another post.)  However, higher ed is closing in on that record. UVa is requesting authorization to construct a center for the arts at an estimated cost of $315 million. However, the school is asking for “only” $165 million from state funds; the remainder would come from its foundation and gifts. In addition, UVa is requesting $250 million in General Fund authorization for an engineering building.

It was not so long ago that $100 million for a higher ed building was a rarity. The world is much different now. The current list of requests includes several facilities with an estimated cost exceeding that amount (requests are for all general fund (GF) appropriation, unless indicated otherwise):

In addition to some general comments, I would like to nominate several projects and institutions for special recognition:

First place–Virginia Tech—In the budget bill just signed, Tech received authorization and funding to replace Randolph Hall, the university’s largest engineering building, at an estimated cost of $223 million. Without missing a beat, for the amended budget, it is requesting $216.7 million to expand the Virginia Tech-Carilion School of Medicine, $122.9 million to renovate and expand the chemistry/physics building, and $88 million for various other projects.

Runner-up– VCU—The university was authorized $163 million in General Fund appropriation in the current budget bill to construct an “Arts and Innovation Building.” Before even starting on that project, it has requested $152 million for an interdisciplinary classroom and lab building.

Virginia State University and Norfolk State University. Both schools are small and have limited capital outlay staff to manage projects. Both have major projects underway, with Virginia State authorized a $100 million project in 2020 and having spent less than $10 million on it. Virginia State also was authorized three relatively small projects, totaling $59.5 million, by the 2022 General Assembly. However, both schools are a Historically Black College or University (HBCU) and, in the past, there has been political pressure to give each school “something.”

Most Demonstrative of Why Fees for College Students Have Increased So Much:

Norfolk State University—The university has requested authorization and General Fund money for a “Living Learning Center and Dining Facility.” Here is the university’s description of the project:

Ordinarily, this type of project would be funded wholly, or primarily, with revenue bonds with the debt service paid out of student fees. Perhaps the university was leery of raising student fees more and, therefore, is proposing that it receive general fund-backed funding.

The capital outlay section of the budget is the one that receives the least scrutiny. The capital outlay subcommittees of the two money committees meet a few times, but specific requested projects are seldom discussed in those meetings. Moreover, the meetings are not well attended and reporters seldom attend. Nevertheless, a huge amount of general fund money is either appropriated or obligated as future debt service in this process. If a single operating program received a new $223 million appropriation, that would be big news. However, the obligation of that much money for a single building at Virginia Tech elicited no notice. (It does not help that the specific amount for that project and several others were lumped together in a capital “pool.”)

Although the subcommittee meetings do not attract many observers, there is a lot of action going on behind the scenes. “Regular” state agencies are not allowed to lobby for their projects, but there are no constraints on higher ed institutions. Most institutions have lobbyists at the legislative session, as has been discussed on this blog. Furthermore, the best “lobbyists” are the alumni in the General Assembly, pushing for projects for their alma maters. It is not unusual for a higher ed capital project that was not included in the Governor’s introduced budget to be included in the final, approved budget bill. In fact, that was the case with the large, $223 million project for Virginia Tech, replacement of Randolph Hall, in the 2022 Session. It was not in the introduced budget, but lobbyists and other advocates for the university succeeded in getting it included in the final budget bill, bumping numerous projects from other institutions in the process.