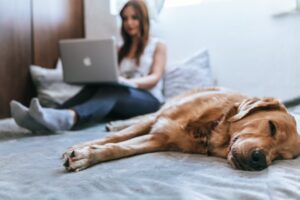 Time to close those laptops, take off your pajamas and head back to work.

I know, I know, it’s been fun sitting home with your cats since early 2020, when Gov. Ralph Northam shut down the commonwealth to slow the spread of COVID-19.

And we all know how successful THAT was. In fact, we’ll never know just how many lives were saved by prohibiting loud music on the beach and volleyball.

The fun is over. Time to get into the 9-to-5 routine again. Governor Glenn Youngkin is graciously giving you until July 5th to ease yourselves back into the office. Those with legitimate health needs or other concerns can apply to continue to telecommute, but the expectation is that state government will soon be functioning as it did prior to the pandemic: in-person and five days a week.

Is that too much to ask?

Shoot, even The Washington Post, which loathes Youngkin, admits the Virginia state workers have been on an extra-long homebound hiatus compared to their counterparts in Maryland and D.C. who were back at work in July 2021.

Youngkin built his successful campaign for governor last year partly on the premise that Democrats had gone overboard with pandemic shutdowns and restrictions, including the extended closure of schools and the suspension of walk-in services at the Department of Motor Vehicles.

Youngkin campaigned hard against mask mandates in schools and issued an executive order on his first day in office rescinding a vaccine mandate imposed on state workers by his Democratic predecessor, Ralph Northam.

But his action on remote work is not out of step with more liberal jurisdictions nearby. Public employees in Maryland and D.C. have been back to in-person work since July.

Keeping a campaign promise, Youngkin got DMV employees to their work stations on March 2, bringing an end to the massive inconvenience of appointment-only encounters with staff.

That move was greeted with relief even by some on the other side of the aisle.

According to The Roanoke Times, Democratic state Senator Chap Petersen, an outspoken critic of school mask mandates and Northam’s shutdowns, reacted to news of Youngkin’s DMV edict with relief.

“Very glad to hear it,” said Sen. Chap Petersen. “Should have happened a year ago.”

This all should have happened a year ago. But even after he ended Virginia’s state of emergency, Northam allowed state workers to work from home.

While some employees are grumbling, one group is celebrating in Richmond: restaurateurs. They saw their lunch traffic dwindle to nothing during the pandemic. Once workers are filling the office buildings again, they hope to rebuild their lunch trade.

Northam, a doctor, may not be aware of the synergy that happens in the workplace when employees are together. But he should have been aware of the health problems that would result from forced telecommuting.

On Wednesday, in a piece headlined “Doctors Say These Pandemic Side Effects Are Serious Problems—And Unlikely To Go Away Anytime Soon,” CNBC reported on the deleterious effects of prolonged working from home.

Doctors are seeing an epidemic of everything from weight gain, high blood pressure, skin problems, mental illness and even serious foot and ankle problems due to going barefoot around the house.

Beyond that, humans are social creatures. It’s unnatural and ultimately not good for society for large numbers of folks to hibernate.

Time for state workers to lose the elastic-waist pants and the bed head and get back to their cubicles.

This entry was posted in Government workers and pensions and tagged COVID-19. Bookmark the permalink.