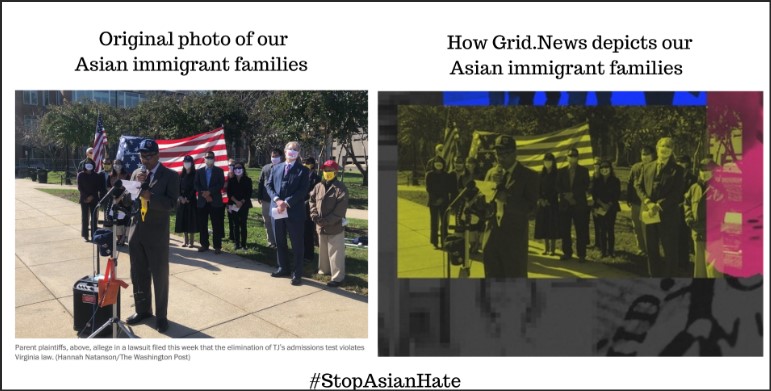 In June 2021, a reporter for Politico, Maggie Severns, reached out to interview me about the activism in northern Virginia around the governor’s race. Connecting with her over our common roots in West Virginia, I invited her to an event at an Indian restaurant hosted that night by the Coalition for TJ and the American Hindu Coalition, two local groups with Asian immigrants as members.

In a long interview, I told her that the story in northern Virginia belies stereotypes. Many of us are Asian, immigrant parents with long history as Democrats but the war on merit education — particularly in our community at Thomas Jefferson High School for Science and Technology — had turned so many parents off, they were hosting a meet-and-greet with Republican candidate Glenn Youngkin. Staff for the Democratic candidate, Terry McAuliffe, had asked for a sizable donation in exchange for a meeting, while Youngkin hadn’t asked for any quid pro quo.

I spent a lot of time trying to bring the stories of our parents to life. But almost a year later, it didn’t matter, as Maggie pens a piece for a new media outlet, Grid.News, filled with stereotypes and caricatures that the Fairfax County school board and activists within TJ Alumni Action Group have long been throwing at our families and students.

The PDF of the original biased article is here as Exhibit A in media bias. This is the link to the story but read the PDF so you don’t give the link hate clicks.

We have gotten the message loud and clear that we don’t matter in America’s new “Oppression Matrix” and “Privilege Bingo Card.” But in this letter to the top editors, Mark Severns and Laura McGann, at Grid.News and Maggie, I want to send them a clear message: you can’t break your own “diversity” rules when it comes to us, marginalizing, erasing and making a caricature of us, painting us as “bankrolling” our children’s education to some nefarious ends.

Here is a PDF to the largely homogenous staff at Grid.News, while the reporter casts aspersions on Asian parents threatened by “diversity.”

My mother wonders why I am spending my time writing this. I have other things to do on a Saturday. But you know what, Mark, Laura and Maggie?

You cannot erase us anymore, as you did with your filtered photo of us, painting us as an ominous threat.

We are a part of America, and one day the Supreme Court of the United States of America will reveal clearly and empathetically that we are on the correct side of history as civil rights activists, not the caricatures with which you have tried to marginalize us.

We are all waiting to hear how you are going to fix your bigotry against Asian American immigrants. You can reach me at asra@asranomani.com.

From: Asra Nomani <asra@asranomani.com>
Date: Saturday, April 16, 2022 at 6:42 PM
To: <mseverns@grid.news>, Mark Bauman, Laura McGann
Subject: Your Grid piece is racist and filled with errors – you need to fix this

It is an understatement to say I am disappointed by your racist and bigoted article, “Parent vs. parent: A fight over admissions rockets from Zoom to Twitter to criminal court. When a Virginia magnet school tried to overhaul its admissions policy, a national debate became personal.”

The only thing you were missing was putting horns on our heads, fangs on our teeth and “slanty eyes” on our faces.

For too many of you, our Asian immigrant families of color are fair game, aren’t we for your caricatures, bigotry, marginalization and racism? That is what leads to hate, Maggie.

And realize this: You wrote about us without us.

You wrote about our Asian families and students but you did not include the voice of a SINGLE Asian person in your story, other than quoting a random tweet or two from me. That is what marginalization looks like.

You never contacted me for this article, where you turn me into some kind of manipulative “former journalist” when I am very proud to be a current journalist, using the talents the heavens gave me to bring to life and humanize the hardworking Asian parents and kids I have had the honor of knowing.

I have enumerated below 13 glaring mistakes and cultural and racist stereotypes in which you have engaged.

Please reply to this email, copying your editor and your staff official in charge of diversity, equity and inclusion.

13 errors in the racist, anti-Asian Grid piece by Maggie Severns.

#StopAsianHate, Maggie and the Grid.

This entry was posted in Culture wars, Education (K-12), Race and race relations and tagged Asra Nomani. Bookmark the permalink.