Graph of the Day: Maternal Mortality 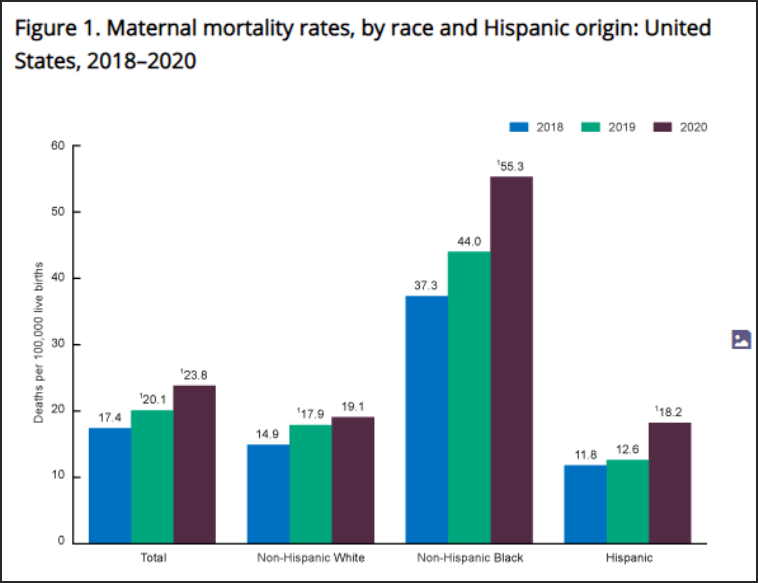 Source: National Center for Health Statistics, by way of The Virginia Mercury

When writing about “systemic racism” in health care, journalists routinely cite the disparity in health outcomes between White and Black Women. Here in Virginia, the maternal death rate per 100,000 for Black women in 2018 was 37.3 — nearly twice the rate of 14.9 for White women. The disparity has grown even wider since then. That disparity often is presumed, without the need for further proof, to reflect racism.

But could there be other explanations? Virginia health officials will be working over the next two years to understand the disparity by digging into the details of individual cases to get a clearer idea of the factors that might have contributed to the deaths, reports the Virginia Mercury.

Among other factors the team will examine is “noncompliance with appointment.” Is it possible that women who died from pregnancy- or birth-related issues were more likely to have missed their prenatal medical appointments? Could some mothers, for instance, have had difficulty accessing transportation to the doctor’s office or been unable to break free from their jobs? (Or could they have just forgotten about their meetings or otherwise blown them off?)

I’ve never heard this mentioned as a possible factor before. Depending on the findings, the inquiry could change the complexion of the debate. Difficulty in finding transportation is a very different problem than, say, physician racial bias.

The graph above raises other interesting questions. For instance, if systemic racism is the issue, how is it that Hispanic women have a lower incidence of maternal mortality than White women? Is health care systemically racist toward African-Americans but not Hispanics? And what about Asians? Why aren’t they included here? Would the graph show that they have the lowest rate of maternal mortality of all?

Another question: Why did COVID drive up the mortality rate so dramatically for Black women, significantly but less so for Hispanic women, and barely at all for White women? Is mis-trust of the healthcare system a factor? Did closing hospitals to discretionary procedures during the COVID-19 pandemic result in pregnant women skipping their prenatal consultations? There’s a lot to unpack here.

An aside about Bon Secours… If anyone seriously wants to pursue the “systemically racist” angle, they should consider the revelation, reported by The New York Times and followed up by The Virginian-Pilot and Richmond Times-Dispatch in the past day or two, about how Bon Secours Mercy Health under-invests in its Richmond Community Hospital located in the impoverished, predominantly Black East End, even though it is the most profitable hospital in its system. It turns out that Bon Secours exploits the 340B program, which requires pharmaceutical companies to give discounts to hospitals serving low-income populations in the expectation that they will reinvest in those communities. Bon Secours uses Community Hospital essentially as a shell to generate the discounts for pharmaceuticals used in suburban hospitals, charging its suburban customers the full freight, and pocketing the difference.

Instead of applying the profits toward upgrading Community Hospital, critics charge, Bon Secours has plowed the money into its more lucrative suburban operations. The company recites a list of investments it has made in the hospital and community, but it strikes me as thin gruel.

Not surprisingly, this case stems from an ill-designed government program — a boondoggle, if you will. These are the kinds of tangible matters we should be looking into rather than chasing phantasms in the statistics.

The Department of Health initiative is exactly what we need. Hopefully, this investigation will identify the tangible causes of the disparity in maternal outcomes and develop recommendations that will actually improve (or save) women’s lives in a way that is not possible by issuing unfalsifiable charges of racism.