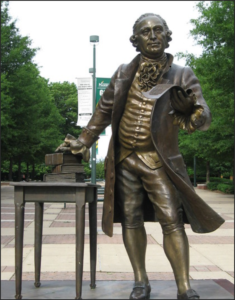 George Mason University, the last holdout among Virginia’s public universities in freezing tuition for in-state undergraduate students this year, has announced that it will rebate this year’s 3% tuition increase.  Now all 15 public colleges in Virginia have acceded to a request by Governor Glenn Youngkin to forebear on raising tuition during a year in which Virginia families have been pummeled by 9% inflation.

The statement came, interestingly enough, from the office of Governor Glenn Youngkin. Said the Governor:

Today, George Mason University joined the 14 other public college and university boards, which serve more than a quarter-million undergraduate college students in Virginia, by pledging to keep tuition flat for in-state students. Early on in my administration, I encouraged all colleges and universities to take on this challenge and I  am pleased that now all of Virginia’s students will have the opportunity to pursue their higher education at every public college, university, and community college in the Commonwealth free from tuition hike fears.

This is a victory, albeit a transitory one, for Youngkin.

For in-state undergraduates, GMU is keeping the tuition increase in place, which will become the new base-line next year. Any future tuition increases will compound on top of a base that has grown from $9,510 for two semesters last year to $9,796 this year.

Second, the rebate does not affect the cost of GMU’s on-campus room and board, which, at $13,120 this year is comparable in size to tuition. I cannot find a reliable source of data online for the previous year, so I cannot say how much this is increasing.

GMU, like every other university in the country, is dealing with inflationary pressures just as students’ families are. With 9% inflation, university operating costs go up. On the other hand, the General Assembly allocated hundreds of millions of additional dollars to support higher education in the 2023-24 biennial budget. Two-year General Fund contributions to GMU will be $31.6 million more than in the previous two-year budget, an increase of 17%.

The GMU administration’s presentation to the Board of Visitors Tuition Subcommittee is an elaborate justification for increased tuition, citing the need to keep salaries competitive, increase financial aid, address “inequities” of all kinds, and pursue strategic initiatives.

Mason, says the presentation, continues to invest in operational infrastructure and technological efficiencies. As a result, it shares with Old Dominion University the lowest ratio of employees to students among the state’s six research universities. 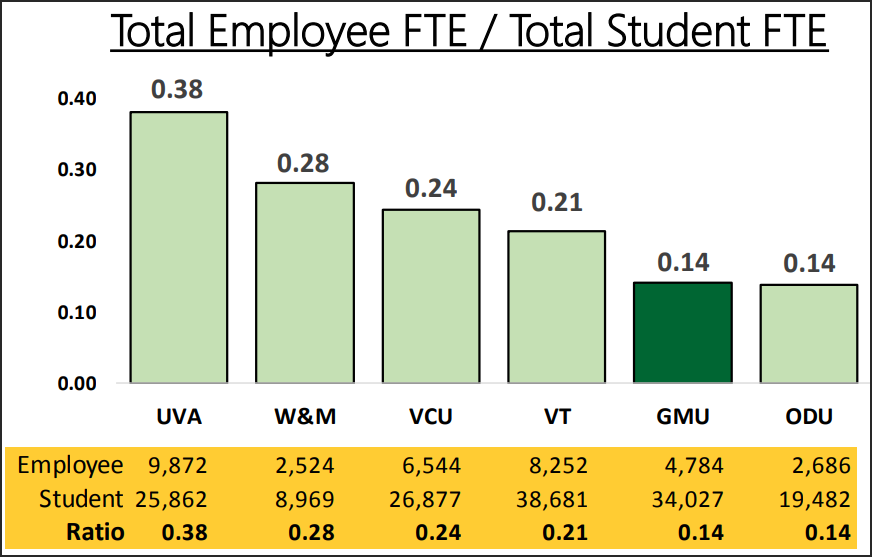 The College of William & Mary has twice as many employees per student as GMU, and UVa has more than twice as many. Call me crazy, but I’m betting that administrators at UVa and W&M don’t present this chart to their Boards of Visitors.

Keeping the bureaucracy under control is commendable. That’s more than can be said for some institutions. There is no indication in the presentation, however, that GMU is addressing other drivers of its cost structure in any meaningful way. Is the university reallocating capital and manpower from low-demand disciplines to high-demand (from feminist literature, say, to cyber-security), or is it maintaining low-demand programs while piling on the cost of new programs? Is the university re-evaluating its tenure policies and examining faculty productivity? Is anyone questioning the “facilities arms race” — new buildings, fancier amenities — viewed as necessary to recruit students? How much does GMU now spend on “diversity, equity & inclusion” initiatives, has it set end-goals for those programs, and does it have metrics for measuring progress?

With minimal action on these cost drivers, we can expect to see continued pressure in the years ahead for the Board of Visitors to keep raising tuition. In the grand scheme of things, a one-year respite does not mean much.