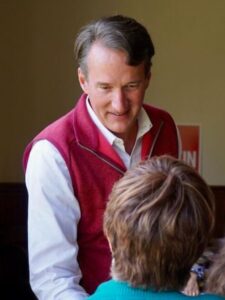 It is my honor to name our first recipient of our Parent Champion Award. We have established this award to honor someone who has gone above and beyond in championing the rights of parents in their children’s lives.

There is a parable that says “For such a time as this…” a leader emerges, prepared for the moment by all of that person’s life experiences before.

First, I want to ask you:

The principal at my son’s high school — Thomas Jefferson High School for Science and Technology — told our mostly immigrant, mostly Asian parents that we needed to check our “privileges.” And with that label, our concerns were dismissed.

Who were our parents?

We are all people connected by our humanity. For such a time as this….

But, somehow over the past year and a half, we the parents became the enemy, didn’t we?

But then, as we struggled as parents to be heard by our elected leaders, somebody emerged who actually listened to us — we, the parents. For such a time as this…

He was a man who chose in the summer of 2020 to run to become governor of the Commonwealth of Virginia.

This was happening as parents across the country started to recognize the important role of local and state governance in education.

In Virginia, we knew that we had to find a leader for our state who would listen to us and hear us. And that is how this parable rings true today:

“For such a time as this” a true leader stepped forward, and then stepped up.

That man came in the form of our first recipient of the Parent Champion Award. A man by the name of Glenn Youngkin.

A newcomer in politics, Glenn Youngkin built his career working in business.

Beyond his resume, there is something important that courses through him. Someone important.

She speaks to all of us.

Glenn Youngkin was born in 1966 in Richmond, Virginia, to a young mother in her late 20s  — Ellis Youngkin — who had just become a nurse when she had her son, her second child.

Through the trials and tribulations of ordinary life, she and her husband, Caroll Youngkin, raised their family in Virginia with the values of hard work, excellence and resilience. In high school, to help make ends meet at home, her young son flipped burgers at a local restaurant, as he went to school.

As her son attended college on a basketball scholarship, Mrs. Youngkin became Dr. Youngkin, in the spring of 1990 earning her PhD in nursing.

She is the original mama bear. For such a time as this…

Strong, resilient and determined — with a deep sense of value in education.

In the summer of 2020, she was a beloved memory that inspired her son as he crisscrossed the state meeting parents, grandparents, aunts, uncles and neighbors who care deeply about children. For such a time as this…

After winning the Republican nomination to become governor of Virginia, Glenn Youngkin‘s first event with parents was at an Indian restaurant here in northern Virginia — with so many of the families from our Thomas Jefferson High School for Science and Technology community there to hear from this potential new leader for the state.

And he did something remarkable.

There was just a father in a shirt and slacks, who hoped to lead our state, and wanted to better understand the realities of Virginia’s parents and families.

Then on Election Day 2021 something remarkable happened. For such a time as this…

The mama bear and papa bear movement not only spoke. We voted.

But most of all — so many of us wore smiles on our faces.

You — Governor-Elect Youngkin — gave parents something we so desperately needed: hope. For such a time as this…

You understand something very clearly.

There is nothing more sacred than a child. Thousands of miles away in a different time and place, a poet named Khalil Gibran wrote these words that are timeless and eternal and speak to parents in a way that you also embody.

You are the bows from which your children as living arrows are sent forth.

The archer sees the mark upon the path of the infinite,

and He bends you with His might that His arrows may go swift and far.

Let your bending in the archer’s hand be for gladness;

For even as He loves the arrow that flies,

so He loves also the bow that is stable.

We give this Parent Champion Award to you, Governor-elect Youngkin, because you make stronger our country’s parents — the bows from which our children spring into the world.

When you make families and parents stronger, you make our children stronger.

For this, we thank you. We thank your mother and her memory for raising a leader with such character and commitment to truth.

Thank you very sincerely for the hours and days you have listened carefully to parents and our children across Virginia, and for your deep commitment to work hard on our behalf, to fight indoctrination in the classroom, and promote the restoration of a healthy, non-political education for our children.

We are honored to award you our first Parent Champion Award, Governor-Elect Youngkin!

For such a time as this….

Asra Nomani is the Vice President for Strategy and Investigations at Parents Defending Education. This column is republished with permission from her Substack newsletter, Asra Investigates.

This entry was posted in Education (K-12), Individual liberties and tagged Asra Nomani. Bookmark the permalink.