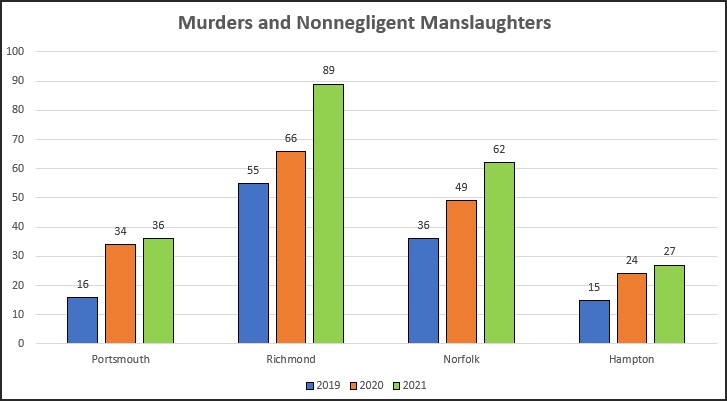 While overall crime rates have remained fairly stable in Virginia since 2019, the year before social-justice protests rocked the state and nation, the homicide rate has increased alarmingly. The total number of murders and nonnegligent homicides leaped from 428 in 2019 to 562 in 2021, according to data recently published in the 2021 Crime in Virginia report.

As we struggle to explain what accounts for the surge, one pattern stands out. Four cities — Richmond, Norfolk, Portsmouth and Hampton — account for almost 70% of the increase. The number of homicides increased by 34 in Richmond, 26 in Norfolk, 20 in Portsmouth, and 12 in Hampton over the two-year period.

They weren’t the only localities to see big increases. The number in Fairfax County jumped from 14 to 26, an increase of 12, which also calls out for explanation. But Fairfax has a population larger than all four of the aforementioned localities combined. The wave of killings in Virginia’s aging inner cities is wildly disproportionate not only in absolute numbers but the magnitude of the increase.

Various theories have been proffered to explain the devastating upturn. One blames COVID, on the logic that the pandemic was economically and socially disruptive, throwing people out of their jobs and cooping them up in their homes. Given the highly localized nature of the violent crime surge, however, that seems unlikely. If COVID were to blame, why wouldn’t we see similar increase in the suburbs, smaller cities and rural areas as well?

What else might explain the pattern? I would suggest the answer resides in the nature of local politics and culture.

The biggest jump occurred in the City of Richmond. What distinguishes the city from other localities in Virginia, other than, of course, the state’s largest concentration of lower-income African-Americans? Well, it has a progressive mayor, a progressive daily newspaper, and a large and militant activist community. Many of the activists, it is worth noting, are not African-American, but politically radical Whites with a current or past affiliation with Virginia Commonwealth University.

A deep dive into causality would conduct two layers of analysis. One would be to examine changes in institutions, primarily the criminal justice system. Have law-enforcement practices changed? Has the prosecutorial philosophy changed? To what extent has the population been “de-incarcerated “and criminals been released back into the community through bail reform, parole reform, whatever? Has law enforcement in these localities been hindered by manpower shortages or public outcries about alleged police abuses?

A second level of analysis would examine the prevailing rhetoric of the community in de-legitimizing the criminal justice system. What role do “community organizers” play? To what degree do non-profit advocacy groups support local activists in their militancy? What rhetorical support do militants get from local media, especially the dominant newspaper, and from leading cultural institutions and opinion shapers? To what extent does the dominant rhetoric blame racism, inequality, and the police rather than the individuals who commit the crimes?

These are questions we ought to be asking. If we don’t, it would be folly to expect outcomes to change.