For the Left, Government Is Always Underfunded

Governor-elect Glenn Youngkin has proposed several savings for Virginia’s taxpayers, including doubling the standard deduction, providing a one-time tax rebate, eliminating the grocery tax, and suspending the 10-cent increase in the gas tax. His proposals come at a time when Virginia has a record $2.6 billion budget surplus.

The phrase “could continue underfunding” would be humorous if it were not so reckless.

Since 1961, the Virginia General Fund, primarily based on income taxes, has increased six times faster than population and inflation.

No matter how fast government spending increases, Virginia Public Media will say that “essential services” are “underfunded.” There are never enough taxes for the Left.

Most of our taxes are wasted. Including state, local, and federal revenues, Virginia public schools cost taxpayers $19 billion a year and teach almost nothing. 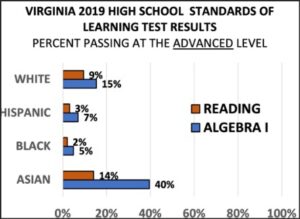 Every year the Virginia Department of Education administers “Standards of Learning” (SOL) tests. The SOLs have two passing thresholds, “proficient” and “advanced.” “Proficient” should be termed “barely proficient” as it is passing, i.e., just above failing.

A better indicator of college and career preparedness is the “advanced” threshold. On the high school reading and Algebra I tests, only 9% of Whites read at the advanced level and only 15% pass Algebra I at the advanced level. Hispanics and Blacks do worse. Asians, who get supplementary help at home, do better.

Public schools fail at their primary mission, that of providing upward mobility. Instead, they perpetuate poverty and racial inequality and turn out children who are probably less educated than their parents.

Welfare, primarily Medicaid and other public health programs, subsidize the poverty created by public schools and solve nothing. The poor are still poor, and medical providers still charge exorbitant rates to the uninsured because healthcare has no price competition.

Soaring General Fund revenues are monopolized by welfare and the failed education system. They are off-limits to transportation, which is funded by other taxes such as gas taxes and toll lanes. Toll lanes should be called “Medicaid lanes” because they replace the revenues that should have been spent on transportation but were instead siphoned off by Medicaid.

Moreover, the Left promotes costly mass transit projects instead of roads, even though mass transit ridership has plummeted since COVID.

Virginia Public Media asserts that the current $2.6 billion surplus exists because government is “underinvesting.” They ignore two recent tax windfalls. One is the internet sales tax, which started July 2019. The other is that Virginia failed to increase its income tax standard deduction to conform to the standard deduction increase under the Trump tax reform. As a result, Virginians who used to itemize deductions were forced to take the low Virginia standard deduction and pay more state income taxes.

In announcing the $2.6 billion budget surplus, outgoing Governor Northam failed to mention how much of the surplus came from these two tax hikes.

1) Public schools are failing to teach reading and math because they use the quack “whole language” curriculum instead of intensive phonics and they replace math drills with hand calculators. Fixing reading and math would raise achievement for all races, especially Blacks and Hispanics, and reduce racial inequality. Graduates could get good jobs and would not need Medicaid. Do not increase public-school spending until curricula are fixed.

2) Virginia pension systems have a $20 billion unfunded liability, despite doubling the taxpayer funding of the pension systems. Do what private industry did long ago and replace pensions with defined-contribution plans.

3) Fairfax County saved $14 million by moving all employees from fixed-copay health plans to co-insurance plans. This forces providers to publish prices and compete. Virginia should do the same.

Finally, Virginia Public Media should not compare Virginia to other states, whose taxes and spending are probably also out of control. Never-ending tax increases are the symptom of bad policies. It’s time to fix the policies and cut the taxes.

This entry was posted in Budgets, Taxes, Uncategorized and tagged Arthur Purves. Bookmark the permalink.