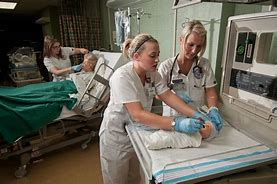 A future without enough nurses is unacceptable.

There is some good news.

Clinical nurses make a lot more money now than they used to.  COVID fixed that.  The travel nurse bubble is burst, but the pay raises for staff nurses appear to be sticking.

The raises for nurses across the field were very large, whether they stayed where they were or were recruited elsewhere. There was a lot of churn, but nurses deserve the extra money. We know where that money will come from. Price increases for medical care and insurance.

But COVID also caused so many nurses to retire or otherwise leave the field that it both exacerbated and exposed shortages that predated the pandemic.

The supply of new nurses is bottlenecked at the nursing schools. But the reason flips the teacher supply problem on its head.

It is of course a money issue at most of Virginia’s 81 nursing programs, and one we have no option but to address.

Nursing school staffing is not a new problem.

In 2019-20, before the COVID-associated spike in field nurse salaries, 26% of qualified applicants were turned away from Virginia’s nursing schools. Trends were similar across the country.

During COVID, salaries for nurses in the field quickly and massively outstripped those of nursing school faculty, making it very hard for those schools to retain nurses on staff, much less to expand those faculties to meet demand.

Post-COVID, the raises in the field have proven sticky, making it much harder to retain and recruit faculty. Most of Virginia’s nursing programs don’t have the resources to raise faculty salaries to the levels required to be competitive.

Cardinal News reported at length in February on the problem.

Richmond, thick with lobbyists for both the employers of nurses and the nursing schools, should be able to come up with:

The hard part is who pays.

Who pays? Obvious candidates to contribute to the financial solution are:

So, we have the outlines of a deal. There will be sharp elbows in the negotiations between employers and the state, but one can be had.

Virginians of all stripes will want the deal to be cut sooner rather than later.