Feel-Good Story of the Day: Ambulances for Ukraine 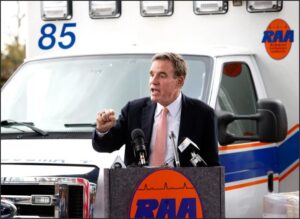 The Richmond Ambulance Authority (RAA) has announced the donation of one of its ambulances as part of the “U.S. Ambulances for Ukraine” initiative. The RAA partnered with the Virginia Hospital & Healthcare Association (VHHA), which coordinated donations from HCA Virginia, VCU Health, and the Northern Virginia Emergency Response System to stock the ambulance with medical supplies.

So far, the Ambulances for Ukraine initiative, launched by an Illinois hospital executive, has donated more than two dozen ambulances with supplies.

“Healthcare workers in Ukraine are risking their own lives for their calling to help others in times of need,” said Michael Roussos, president of VCU Medical Center, in a press release issued by the VHHA. “VCU Health’s mission to preserve and restore health for all people extends beyond the commonwealth.

This entry was posted in Charity and philanthropy and tagged James A. Bacon. Bookmark the permalink.