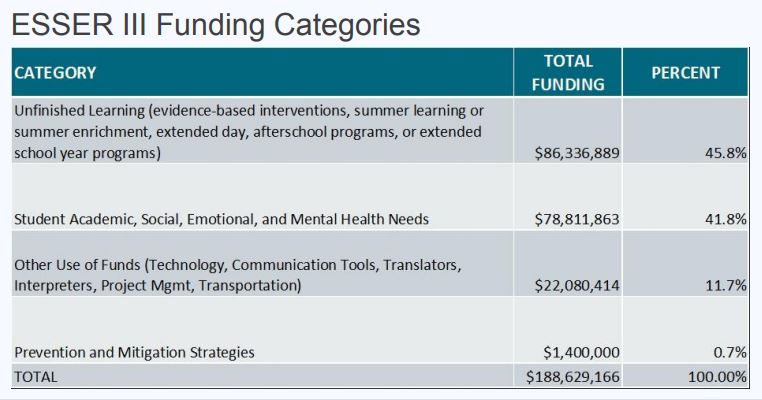 Fairfax County Public Schools are getting $188 million in federal helicopter COVID-19 relief funds, and school officials propose spending about 88% of the sum undoing the damage caused by the system’s COVID-19 shutdowns. Eighty-six million will go toward addressing “unfinished learning,” and another $78 million to “academic, social, emotional and mental health needs.”

“Disruptions to learning during COVID-19 have resulted in significant ‘unfinished learning’ or ‘learning loss,'” states the proposed ESSER III Spending Plan. (ESSER stands for Elementary and Secondary School Emergency Relief.) Studies predict that students will return this fall with roughly 70% of learning gains in reading achievement compared to a typical school year and 50% of the gains in mathematics, the document says.

None of this is new. We’ve reported repeatedly about the widening of the racial achievement gap on this blog. And I’ve got no quarrel with the idea of using federal helicopter dollars to ameliorate the damage done by the shutdown. Students need to catch up this year, or schools run the risk of cascading failure as students who couldn’t master one year’s educational standards struggle to meet the next year’s.

What I find intriguing about this document is that school officials take zero responsibility for the yawning racial achievement gap. COVID struck. Schools were closed. And “wealthy families were more likely to hire professional tutors to combat learning loss.”

Not everyone hired tutors. Other parents organized “learning pods” to share resources and supplement whatever education their kids were getting from Fairfax Schools.

But the gap the fault of the wealthy families, you see. Not the school officials or the teachers unions who insisted upon curtailing in-person learning, even though public schools overseas and many U.S. states and private schools almost everywhere managed to teach in-person without students and teachers dropping like flies. Certainly not the fault of students who basically checked out of the distance-learning classes — that would be blaming the victim!

What this document tells me is that the leadership of Fairfax County schools is so blinkered  — so determined to jam the round peg of social-justice ideology into the square hole of reality — that they have learned nothing useful from the epidemic. Accordingly, I have no confidence in their prognosis of what needs to be done, or that the $188 million will be well spent. I’m sure others will disagree with me. We’ll find out when we see the SOL pass rates next year.