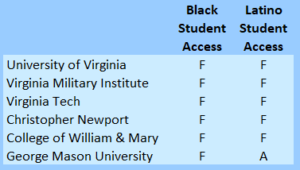 Virginia’s most selective public universities get failing grades in a report by the Education Trust for under-representation of African-American students, and most get failing grades for the enrollment of Latino students. But, then, the track record of higher-ed institutions nationally is discouraging, too. While roughly 40% of the nation’s most selective public colleges and universities increased the percentage of black students since 2000, 60% saw a decrease. The higher-ed institutions did a better job of increasing Latino enrollments, but still fell short of the Education Trust’s proportional-representation standards.

The report, “Segregation Forever?” has many grave flaws. The study holds universities accountable for “systemic inequities” in the educational pipeline, starting in preschool, in which blacks and Latinos are less likely to receive college-preparatory educations. The institutions, says the report, “cannot continue to hide behind biased admissions standards, such as high-stakes standardized testing.” Furthermore, the study ignores the fact that public institutions are competing against elite private universities, often with large endowments, for a limited pool of minority candidates. Its recommendations would intensify the competition for the top minority applicants while doing nothing to enlarge the pool.

Still, the report does highlight how, despite the sea change in ideology and rhetoric about race in the top public campuses, no progress has been made since 2000.

The Education Trust report compiled a list of the 101 most selective public colleges in the country. Virginia had more than its proportional share of elective institutions. They include the University of Virginia, the College of William  Mary, Virginia Tech, George Mason University, Christopher Newport University, and the Virginia Military Institute. The researchers compared the enrollment of blacks and Latinos at each institution in 2017 with the percentage of blacks and Latinos among the state’s high school graduates that year to derive a grade.

The one Virginia standout was George Mason, which rated an A for its enrollment of Latino students. However, GMU was rated F for blacks.

Christopher Newport, which ranked C for its enrollment of blacks in 2000, fell to an F in 2017.

Improving access, suggests the authors, is “a matter of will.” The report recommends the following:

Without saying so directly, the Education Trust recommends setting racial quotas, and giving blacks and Latinos preferential treatment in admissions and financial aid. These policies would entail active discrimination against whites and, most especially, Asians. Furthermore, the Trust gives no consideration to the impact of admitting minority students into institutions where they are less academically prepared to handle the level of work. Other research indicates that such policies have a negative impact on minority students’ self confidence and their ability to complete college.

Other than reminding us that we have a long way to go, the fixation on racial bean counting and harping on “disparities” accomplishes nothing useful. The report’s recommendations would do active harm.

This entry was posted in Education (higher ed), Race and race relations. Bookmark the permalink.