Every Day Is Memorial Day in Normandy 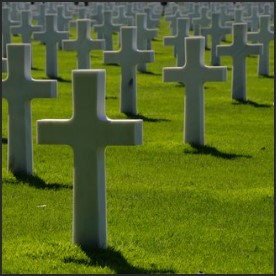 My most memorable Memorial Day did not take place on Memorial Day at all, but a few weeks earlier. In May of 1982.

But then again, every day is Memorial Day when you stand on those beaches at Normandy. It was a glorious spring morning on the coast of France. The sky was the deepest shade of blue. A gentle wind made the American flags flutter. And I was there with 52 Irish boys. Bad boys.

I’m getting ahead of myself.

Twenty-one years ago, I lived in Dublin, where I attempted to eke out a living as a freelance writer in the dingy offices of the now-defunct Irish Press. While back home, American newsrooms were swapping their IBM Selectrics for computers, this one was stuck in another era. Manual typewriters created a chattering cacophony, cigarette smoke turned the air blue, greasy chip wrappers littered the floors. Everyone was known by their last name.

Except me. I was The Yank.

I was toiling away on some forgettable story, dutifully reminding myself to spell gray as “grey” and harbor as “harbour,” when I overheard two of my editors talking.

“Hey, Yank,” O’Kane shouted. “How’d you like to go to France for the weekend?”

I’d never been to France. I was weary of the endless Irish gloom. The unexpected offer of a weekend in sunny France was so seductive I never asked if there was a catch.

There was, of course.

All I had to do, O’Kane said, was accompany a group of schoolboys on a trip to Normandy. Great fun, he grinned.

What O’Kane neglected to tell me was that these boys were 10- to 13-year-olds from Ballyfermot. Everyone in the newsroom knew what that meant. Except me. Dublin toughs. O’Kane also omitted details of my role on the trip. Not only would I write a happy feature about the boys and the beaches, but I also was to be a chaperone. The teacher sponsoring the trip had found himself at the last minute with more than 50 boys and only a handful of adults willing to make the journey. A trip that would begin and end by chartered bus, with two overnight ferry trips between Rosslare and Cherbourg.

By the time I learned the truth, it was too late. I was packed.

We gathered on a Friday morning in the parking lot of Mary Queen of Angels School. Everywhere I looked were boys, bigger than me. Standing nearby were their mothers. Weatherbeaten women. Teary-eyed, too. Sipping sherry from paper cups.

“A toast to your trip,” one mom said, proffering some of the amber liquid.

“Thanks, but no,” I said, gesturing toward the boys.

Ah, would I ever.

The boys were in high spirits as we pulled away. I expected them to be as enchanted by the Irish countryside as I was. These underprivileged, urban urchins had seen little of their tiny country. But a lively poker game in the back of the bus immediately captured their attention.

At our first stop, less than an hour out of Dublin, I realized to my horror that I was traveling in the company of young kleptomaniacs.

The boys swarmed into a shop where they purchased candy and pilfered more costly items, leaving the teacher and me to bark at them until the booty was returned.

Once we boarded the ferry, the boys were assigned to bunk rooms, while I, the lone female, had a small stateroom of my own. Not that I’d spend any time in it.

The ferry was late departing. To make up for lost time, the crew pulled in the stabilizers. An hour or so into the trip, passengers were retching from the motion. Our boys were especially queasy. They’d smuggled along a stash of cigars. Those smokes went well with the cocktails they manufactured from the dregs of drinks they’d collected in the bar.

Disgusting, but clever, their teacher and I agreed.

By midnight, we were busy. Holding the heads of sick boys and praying that we’d make it to France. Soon.

As we pulled into the little harbor at Cherbourg on Saturday morning, we counted heads and found all of our hung-over charges unsteadily on deck.

So far the trip was a success.

“How’s your French?” the teacher asked.

“Here,” he said, handing out printed cards to the boys, “You’ll need one of these too.”

I am Irish. I am lost. Please direct me back to the ship, Saint Killian II.

The indignity of it all.

As we set out toward Normandy, the teacher stood in the front of the French tour bus and reminded the boys of D-Day in June of 1944. We passed German bunkers. We stopped at Utah Beach. And Omaha.

Then we went to the American cemetery.

Pausing a moment, the teacher somberly reminded the boys of the more than 9,000 American soldiers who were buried there. He told them that there were more than 1,500 graves they wouldn’t see. Those of the men who died that day and whose bodies were never recovered.

“Silence and respect,” he cautioned as the boys disembarked.

When they caught sight of the rows of thousands of snowy crosses, our 52 boys fell silent. So did I.

I’d like to tell you that the boys were changed after their visit. Perhaps they were, but changes weren’t immediately evident. The trip back to Dublin was much like the trip away.

A couple weeks later, a letter arrived for me in the newsroom. It was a brief thank you from the teacher, who had enclosed a couple of notes from the boys.

One said he’d always remember his trip to Normandy. He especially liked seeing the Yank cemetery and it had made a big impression on him.

I knew just what he meant.

It made a big impression on me, too. Because, there, every day is Memorial Day.