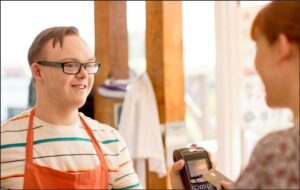 Virginia is top ranked as a business-friendly state. How we treat employees with disabilities in the workplace matters.

What are the hallmarks of a business-friendly environment? Competitive wages, opportunities to build wealth, support for entrepreneurial endeavors, freedom to create and innovate, dignity of work, and economic independence and sustainability – to name a few.

There’s a law on the books in Virginia that legislators and advocates on both sides of the aisle argue stands in direct contrast to many of these principles. It goes back to 1938.

According to Section 14(c) of the Fair Labor Standards Act, employers with a 14(c) certificate from the Wage & Hour Division of the Department of Labor are legally permitted to pay wages below the minimum wage to employees with physical, developmental, cognitive, mental or age-related disabilities.

Here’s how it works: Under the employment of a company with a 14(c) certificate, people with disabilities are subject to routine, timed productivity tests that benchmark their performance against employees without disabilities. Based on how an individual performs on any given day, their pay will be adjusted – sometimes cut to less than half the state minimum wage – until the next test when they have a chance to prove their “worth” to their employer.

There are people who say this is the only way to employ someone with a significant disability. That if employers lose the flexibility to match their employees’ wages to their productivity, they’d rather not employ someone at all and the person with a disability is left jobless. But does that actually bear out?

We have decades of evidence and experience that shows that people with disabilities who have received the proper training, accommodations and support can be gainfully employed, in all types of jobs – from retail to custodial, groundskeeping to skilled trades, and tech or tech-adjacent jobs. In the past decade, large employers of disabled workers, including quite a few in Virginia, have managed to leave their 14(c) certificates behind, shifting business models and innovating to make it work.

According to multiple studies, including data from the U.S. Department of Labor and Accenture, employers who have embraced disability inclusion as a component of their talent strategy consistently report an increase in retention of valued employees, employee productivity, workplace safety, and revenue and profit margins. In other words, adding disabled employees to the workforce is great for business.

Last week, a bipartisan effort to eliminate the use of 14(c) certificates amongst Virginia businesses began in the House Commerce & Energy Committee. This follows a national trend over the last five years to move away from the use of subminimum wage for people with disabilities and modernize employment policies to align with a more contemporary understanding of disability.

While many disability advocates argue that this is a civil rights and inclusivity issue, I would argue further that what we have here is a business and economic independence issue — values that are fundamental to conservatives.

There are several questions to consider here:

What constitutes a true employer-employee relationship?

In a true employer-employee relationship, time and services are exchanged for payment. In different states and industries, that looks different, but theoretically, it’s rooted in our reliance on various services, products and goods.

According to the Department of Labor, the national average subminimum wage for people with disabilities is $3.34 an hour, but there are even more appalling extremes, like Utah where 14(c) is used to pay some people $0.03 an hour. Does $0.03 an hour for services performed really constitute a true employer-employee relationship, affirming and reinforcing the dignity of work or fostering independence and self-sufficiency?

Employment isn’t charity, and it’s not a social club.

At its core, employment is an exchange, and employers and employees alike need to feel like it’s fair and not exploitation.

Bureaucracy is a frequent barrier to business – and 14(c) is nothing if not bureaucratic. It’s characterized as simply an employment incentive, but the reality is that implementing a 14(c) certificate is not the easiest process. Utilizing a 14(c) certificate means an employer administers what’s called a “time trial” every six months, the contrivance of scenarios and tasks to be completed for the sole purpose of productivity tests, and follow-up paperwork. Essentially, you time an employee and compare their time of completion to a “typically abled” worker standard. Melwood, an organization that employs nearly 1,000 people with disabilities, voluntarily relinquished its 14(c) certificate in 2016 but recalls that implementing 14(c) meant they would intentionally create a messy hallway for an employee to clean up under timed pressure. What is that if not a waste of time for all?

On the issue of economic independence for individuals, the opportunity to earn a prevailing wage is critical. Someone who is being paid subminimum wage, despite working just as much or more as other employees, cannot sustain financial independence, creating a greater cost burden on government subsidy programs. Either we are embracing a life of dependency on government benefits, or we’re embracing independent living via gainful employment.

Virginia in the vanguard?

As it currently stands, D.C. has no companies operating with 14(c) certificates. Several of Virginia’s other neighbors, including Maryland and – most recently – North Carolina, have abolished 14(c). Alaska, Maine, New Hampshire, Oregon, Washington, Hawaii, Colorado, California, and Delaware have also eliminated the practice.

At the federal level, the AbilityOne Commission issued a proposed rule to eliminate the use of subminimum wage for people with disabilities amongst government contractors.

In a word, this is happening.

Our government can either work with local businesses now to support this transition, drawing from the experience of organizations like Melwood and standing by its business-friendly values, or fall in line when it becomes the national standard without any of the advantages that come with controlling the process for the organizations currently using a 14(c) certificate or for the employees.

As a commonwealth that other states look to as a model for business practice, strong work values and ethics, and a robust labor force, eliminating the subminimum wage – in practice and principle – is a necessary step.

This entry was posted in Civil Rights, Labor & workforce and tagged Shaun Kenney. Bookmark the permalink.