Electric Vehicles in a Hurricane? 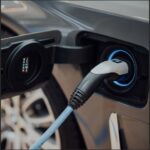 While hurricane season technically began two months ago, it isn’t until August — or even September — that most of us pay attention to those pesky tropical depressions off the coast of Africa.

My favorite parlor game is the annual will-we-evacuate-if-a-hurricane-is-headed-our-way debate. My family’s answer, so far, has always been no.

There’s a reason many of us just smile weakly when emergency management types talk cheerfully about “orderly evacuations” of Tidewater.

We’ve seen tunnel traffic on summer weekends. We’ve spent hours stewing in it. We also know that the only thing worse than being stuck in a flimsy house for a Category 4 ‘cane would be to be spend it in a colossal traffic jam on the bridge by Willoughby Spit.

Now imagine being stuck on the spit in an electric vehicle that’s run out of juice.

That’s the trouble with storms. They don’t file a flight plan. While meteorologists pore over data and try to predict where these hurricanes will go, we have to make our own decisions.

By the time the weather gets scary enough to make you want to leave town, it’s too late.

Then again, we haven’t been seriously menaced by a Cat 5 hurricane. If a monster storm was headed this way, I suppose we’d have to pack up the car and dog and head west.

Envision, for a moment, that Biden’s ridiculous dream of universal electric cars came true. And there was a massive evacuation from the Outer Banks, Florida or even Tidewater.

Actually, you don’t have to imagine it, one of Twitter’s most popular commentators — with an unfortunate handle and more than 800.000 followers – just did:

I live in Florida – hurricanes are unpredictable until the last hours – imagine a million electric cars trying to flee, stuck on major hwys going north and running out of charge … thousands dead – months bringing gas powered generators to clear major highways. This is reality.

He may be right. Electric cars could be a nightmare during a massive evacuation. Studies have been done showing a cascading failure of the power grid if huge numbers of Florida residents simultaneously charged their cars in preparation for a major storm.

EV owners would fare even worse if they stayed behind and were without power for days or weeks.

Anyone else remember Hurricane Isabel in 2003? That storm came ashore in Virginia as a strong Category 1 storm. Yet some of us were without electricity for almost three weeks.

In a 2021 article headlined, “Electric Vehicles Powerless During Hurricanes,” Forbes Magazine claimed that electric vehicles would compound the problems of natural disaster, such as Hurricane Ida that had just wiped out much of Louisiana’s electric power.

On September 5, almost a week after Hurricane Ida, 640,000 customers, or more than one quarter of Louisiana households, are still without power and unable to recharge any electric vehicles they might own.

Any sort of weather emergency would be worsened by an abundance of electric vehicles. Remember last winter’s horror on I-95, when thousands of motorists — including Sen. Tim Kaine — were stranded overnight in an ice and snow storm north of Richmond? Now imagine if most of them were in electric cars. The kind that turn off when they idle. Those folks would have been hypothermic by morning. Some EVs would have died on the interstate, compounding problems.

This push toward EVs is one of the most reckless campaigns ever launched by an administration. Most American families can’t afford electric cars. Almost no one wants to face the cost of replacing EV batteries. And there seems to be no thought given to what happens during weather events like hurricanes, tornadoes and ice storms that knock out the power grid.

Kudos to anyone who’s bought an electric car. I hope you enjoy it. As someone who almost always buys used vehicles, I expect I’ll be driving an old-fashioned combustion engine for the foreseeable future.

If you get stranded at home with your Tesla in the aftermath of a hurricane, give me a call. I won’t pick you up with my gas guzzler, but I’ll sympathize with your plight.

This entry was posted in Disasters and disaster preparedness, Energy and tagged Kerry Dougherty. Bookmark the permalink.