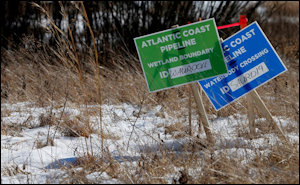 Dominion Energy executives are furious about the way environmental groups have portrayed State Corporation Commission’s recent rejection of the utility’s Integrated Resource Plan as a blow to the Atlantic Coast Pipeline. Dominion describes recent comments by spokespersons for the Southern Environmental Law Center (SELC) and the Sierra Club-Virginia Chapter as deliberate “deception” and “lies.”

While they often express frustration with environmentalist foes in off-the-record conversations, Dominion government- and public-relations executives stick to carefully scripted remarks in public statements and steer clear of personal attacks. But after numerous false statements by pipeline foes over the past few weeks, said Thomas Wohlfarth, senior vice president of regulatory affairs, the gloves are off.

“This has been a pattern of behavior we have seen, and it is what I would say is deception,” Wohlfarth told Bacon’s Rebellion. “They are making false statements. They know they are false statements. These are not errors. … To say [the SCC ruling] undermined the ACP is not only factually incorrect, but a misrepresentation. I would go so far as to say a lie — a deliberate deception.”

Frustration has been building at Dominion as lawsuits, demonstrations, negative press coverage, and tighter environmental controls have delayed implementation of the 600-mile natural gas pipeline and escalated the cost of the project from $5.5 billion to about $6.5 billion. Earlier this week environmentalist attorneys racked up a legal victory, ensuring more delays, when a federal appeals court invalidated a federal permit for the pipeline to cross 21 miles of national forest, including a section of the Appalachian Trail.

Dominion foes also scored a P.R. coup last week when the SCC rejected Dominion’s 2018 Integrated Resource Plan (IRP) on the grounds that the utility had over-estimated electricity load growth over the next 15 years and ordered the company to submit a revised plan. Environmental groups, which had criticized the IRP on the grounds that inflated growth estimates underpinned future construction of more gas-fired generating facilities, felt vindicated.

The problem with the SELC and Sierra Club statements, said Wohlfarth is that Dominion does not justify the need for the ACP on projections of future natural gas demand — it justifies the project on the basis of current need to diversify fuel sources.

What environmentalists said. In prepared statements and quotes to the media, environmental groups spun the SCC decision on the IRP as a blow to the pipeline. A December 7 SELC press release stated:

“Since at least 2015, Dominion has told federal regulators that the pipeline is needed because the demand for power is growing. But now we know that the company has been getting its predictions wrong for years,” said SELC attorney Will Cleveland. “If Virginia doesn’t need new gas-fired power plants, we also don’t need the ACP to run them.”

The SCC decision also puts a fine point on the risk that the ACP poses for utility customers. Dominion plans to charge its customers for the cost of the pipeline—including the 15% profit that goes to the company’s shareholders—on their power bills.

“It’s time that decision makers recognize the ACP for what it is: an abuse of Dominion’s monopoly power that will hurt the people and environment of Virginia,” said SELC senior attorney Greg Buppert.

Similarly, Kate Addleson with the Sierra Club-Virginia Chapter said in a statement:

By acknowledging Dominion’s refusal to accurately forecast Virginia’s electricity needs, the State Corporation Commission has taken an important step in protecting ratepayers from rampant cost overruns associated with the high quantity of unneeded fracked-gas pipelines and plants that Dominion said it needed to meet its inflated load forecasts.

The environmentalists’ charges made it into media reports. For example, writing in The Virginia Mercury, Robert Zullo wrote:

“In rejecting the company’s inflated forecast of electricity demand, in particular, the order reaffirms what SELC has argued for years about Dominion’s flawed planning process and calls into question the need for proposed projects like the Atlantic Coast Pipeline,” Cleveland said.

Why Dominion says the environmentalists are lying. Dominion is only one of four partners in the ACP, and it has reserved about 20% of the pipeline’s capacity. It needs that capacity now, not in the future, Wohlfarth said.

Every year or two Virginia experiences a deep freeze that spikes demand for natural gas and shoots up the price from $3 to $5 per mcf (thousand cubic feet) to well over $100, he said. Just one of those events can cost Virginia rate payers between $100 million and $150 million. The ACP’s added capacity makes it possible not just to supply more gas but to bring in gas from different gas-producing regions than the current sources of supply. “It’s all about the need for supply capacity in Virginia,” he said. “We see the constraints every time we have cold conditions.”

Virginia Power Services Energy Corp. … has subscribed to 300,000 dekatherms per day of firm transportation service [from the ACP]. The natural gas that VPSE will deliver through the ACP is an important pillar of the Dominion Energy diversified energy portfolio; VPSE is depending upon the timely in-service of ACP to ensure the reliable, affordable, safe and clean energy for it customers. In particular, ACP and the access to competitive natural gas supplies that ACP makes possible is urgently needed, as Dominion Energy reduces its dependency on coal and biomass resources.

I asked Wohlfarth how much savings rate payers could expect from the ACP during cold-weather events and how that would compare to the cost of incorporating pipeline costs into the rate base for Virginia electric customers. He did not know if have that information was available, he said. The larger point, he added, is that the pipeline project is about “portfolio diversification and risk mitigation.”

“Look where our gas consumption has gone in the last seven years,” he said. “It wasn’t an issue back then. We weren’t using that much gas. Our fuel diversity came in the form of different coal contracts, nuclear fuel supply contracts. We didn’t do that much long-term [gas] supply hedging. Now, as coal and nuclear plants are at risk, you have seen the need to mitigate the risk of disruption and price spikes through supplier diversity.”

I did not ask Wohlfarth to explain what he meant by coal and nuclear plants being “at risk,” but SELC, the Sierra Club and other environmental groups have argued that Virginia should phase out coal and nuclear generating facilities in favor of more solar and wind energy. The licenses for Dominion’s nuclear units at North Anna and Surry will expire eventually, and although the company has indicated that it wants to extend the life of all four units by another 20 years, there is no guarantee that it will receive regulatory approval.

And by the way… In side comments not related to his charge that Cleveland was misrepresenting the justification for the ACP, Wohlfarth disputed the SELC’s and Sierra Club’s analysis of what the SCC ruling meant for the pipeline.

The Dominion IRP’s forecast for annual electric load growth was 1.4% annually. The SCC argued that the IRP should adopt a 0.8% forecast by PJM Interconnection, the multi-state Regional Transmission Organization that maintains wholesale electricity markets of which Virginia is a part. The lower PJM forecast still indicates that Virginia will experience growth in its electric load, said Wohlfarth. That electricity has to come from somewhere.

But think about what else the SCC said in its ruling, said Wohlfarth. State regulators want Dominion Energy in its revised IRP to run a scenario that shows no off-shore wind. It wants Dominion to show solar farms generating power 23% of the time, not 26% of the time. While Dominion had taken out a base-load combined-cycle natural gas facility that it had projected needing in previous IRPs, the SCC wanted the utility to put the combined-cycle unit back in.

“That’s setting up an IRP that will have less solar and more gas as the least-cost option,” Wohlfarth said. Adopting the SCC’s assumptions likely would strengthen the case for the pipeline, not undermine it, he said.

What Cleveland said. I emailed Cleveland, noting that Dominion had disputed the conclusions he had drawn about the implications of the SCC ruling for the pipeline, and asked him to get back to me. He contacted me by email and we engaged in an exchange in which he answered my questions with questions of his own. I did not get a chance to ask him to respond to Dominion’s charge that he had deliberately misrepresented the facts before he broke off the correspondence.

In the exchange Cleveland cited Dominion’s application to FERC (p. 5-6):

To help meet this demand, Atlantic is applying for a Certificate of Public Convenience and Necessity to construct, install, own, operate and maintain the ACP to provide firm natural gas transportation service of 1.5 MMDt/day through a new interstate pipeline system in West Virginia, Virginia, and North Carolina. The ACP is a proposed interstate natural gas transmission system that will serve the growing energy needs of multiple public utilities and local distribution companies in Virginia and North Carolina. Based on current customer commitments, Atlantic estimates that approximately 79.2 percent of the natural gas transported by the ACP will be used as a fuel to generate electricity for industrial, commercial, and residential uses.

“Is that consistent with what Tom said to you?” he asked.

“I’d say so,” I responded. “He says natural gas demand could increase in the future if Dom phases out coal and/or nuclear, regardless of what happens to electricity demand.”

“Have they said publicly that the need for the ACP is tied to the possibility they may phase out nuclear units?” Cleveland emailed back.

“No. Wohlfarth said, ‘coal and nuclear plants are at risk.'”

“So how are they saying ACP helps in that scenario? Fueling new gas plants built to replace retiring coal/nukes?”

“I didn’t ask that question, and I don’t know what Tom would say.”

I sent the last email around 5:30 in the evening, and Cleveland did not respond further.