Do Slumlords Contribute to Violent Crime? 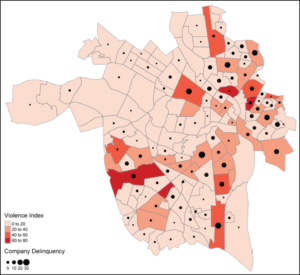 This map shows the correlation between rates of violence in the City of Richmond and tax delinquency by corporate landlords.

In the previous post, I argued that the underlying cause of violence in the City of Richmond is social breakdown stemming from erosion of the family structure and the resultant failure to teach children the skills they need to avoid and resolve conflicts.

In the great philosophical debate over the extent to which individuals and communities have agency over their own fates and the degree to which they are victims of outside forces, I stand on the side of individual agency. By contrast, Samuel J. West, an assistant professor of psychology at Virginia State University, belongs in the structuralist camp.

During his post-doctoral research at Virginia Commonwealth University, West led a research team that uncovered a link between urban violence and slumlords who failed to maintain their properties. Their findings were published by PLOS One in the article, “Comparing forms of neighborhood instability as predictors of violence in Richmond, VA.”

“It is not the residents of high-violence neighborhoods that have constructed a disorganized environment conducive to antisocial behaviors,” the study says, “but those who hold power over the structural features of these neighborhoods, despite not residing within them.”

I am skeptical of West’s conclusions, but I must give credit where credit is due. He and his co-authors pursued a data-driven approach, and they published their findings in an online journal where their work is readily accessible to outside scrutiny. Further, I credit West and his team with applying “social disorganization” theory, a more sophisticated framework for understanding the dynamics between crime and poverty than we usually see. Paying their conjecture the highest of compliments, I would describe it as an intellectually stimulating idea.

Social disorganization theory, the paper explains, examines antisocial behavior (such as crime) in terms of the strength and weakness of a community’s social ties. Communities with stronger social ties have expanded support networks and are better at resolving conflicts. When those social ties break down, residential instability contributes to social disorganization and antisocial behavior. “Neighborhoods with high resident turnover,” West writes, “are likely to have poor social bonds among neighbors which can lead to little willingness to work together towards common goals (i.e. reducing or preventing violence).”

One metric for social disorganization at the neighborhood level, West argues, is property tax delinquency. Previous studies have found that the number of tax- delinquent and vacant properties in a neighborhood predict the level of violent crime. If a landlord falls behind in his tax payments, he’s likely also falling behind in his maintenance of the property. “In the case of rental properties, the tenants themselves often have little say in the state of the building they live in and are typically at the mercy of their landlord for repairs or improvements, which may diminish the ability of collective efficacy to address such physical disorder.”

When taxes are delinquent for two years, these properties are often seized and auctioned to recoup lost tax revenues. The city has no official regulation protecting tenants from the outcome of these transactions, West contends. Thus, the sale of properties to real estate companies contributes to physical disorder, residential instability, and ultimately to crime.

Bacon’s bottom line: I think West and his colleagues need to do more work to make their case. Most suspect is the notion that outside real estate companies are the source of the problem.

In my observation of Richmond’s Church Hill neighborhood, where many years ago I acquired an abandoned, tax-delinquent property that had been rendered uninhabitable, most tax delinquents were African-American property owners with deep roots in the community. For decades, outside real estate interests had zero interest in these neighborhoods. Outside investors began acquiring Church Hill properties only when the neighborhood began gentrifying and they could bet on rising real estate values. These investors were far better capitalized than the home-grown landlords. On the other hand, perhaps some outsiders were over-leveraged speculators who got in over their heads and fell behind on taxes and maintenance. Whatever the truth of the matter, West needs to nail down that link rather than assume it exists.

It’s a debate worth having.

This entry was posted in Crime , corrections and law enforcement, Poverty & income gap and tagged James A. Bacon. Bookmark the permalink.