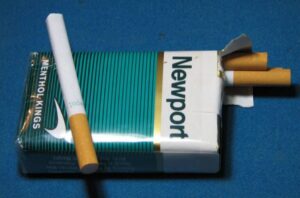 Full disclosure on this one: I hate cigarettes. I have never smoked one — ever. When I waited tables and tended bar, the worst part of the job was cleaning ash trays. And that includes the time I had to break up a bar fight after which the teeth swallowing loser had a tracheotomy performed on him.

Today’s front page of the Wall Street Journal had this article : Biden Administration to Seek Ban on Menthol Cigarettes Tobacco industry indicates court fight is possible over move, which would take years to implement. Going through the courts gets around the legislative process — again.

In the article one finds this nugget that should get the attention of any observer of Virginia politics:

In the U.S., 84% of Black smokers and 47% of Hispanic smokers use menthols, compared with 30% of white smokers, according to the National Survey on Drug Use and Health data.

Wow. Eighty-four percent of black smokers use menthol? Not exactly an answer for Jeopardy! but as Sheriff Buford T. Justice would say “that’s an attention getter!”

45% turnout this year in Virginia would be around 2.688 million votes.

Terry McAuliffe won in 2013 by just 56,000 votes over Ken Cuccinelli and that was with spending 70% more in the process.

Do I think there are now 47,416 votes against this in Virginia? No, of course not. But do I think that the 2021 elections are going to be close and that this could be a serious problem for Democrats?

How much did this ad cost the GOP?

Not to mention all those tobacco-related jobs as well as other smokers who could rightly surmise that an all-out ban on cigarettes is coming and it’s coming from Democrats. In THAT case, you’re talking about a potential cigarette ban for 376,000 smoking voters before you scratch the ol’ What’sNext?JustLeaveMeTheHellAlone! voters.

And all this comes at the same time Virginia is legalizing possession of marijuana.

Do you recall David Shor’s 2020 Election Autopsy in New York Magazine entitled Why Trump Was Good for the GOP and How Dems Can Win in 2022? In that piece, Shor laid out how much black and Hispanic voters moved toward Republicans in 2020 while college-educated whites moved to Democrats.

But wait! Is there more? YES. The ACLU has jumped into this on the side of racial justice which means even more voters could become activated to vote against this ban or support those who are being disproportionately affected by it. #WokeNonSmoker

Chris Saxman is executive director of Virginia FREE. This commentary is republished with permission from his Substack account, The Intersection.

This entry was posted in Politics, Public safety & health and tagged Chris Saxman. Bookmark the permalink.