Despite Tighter Gun Laws, Firearm Violence Up in 2021 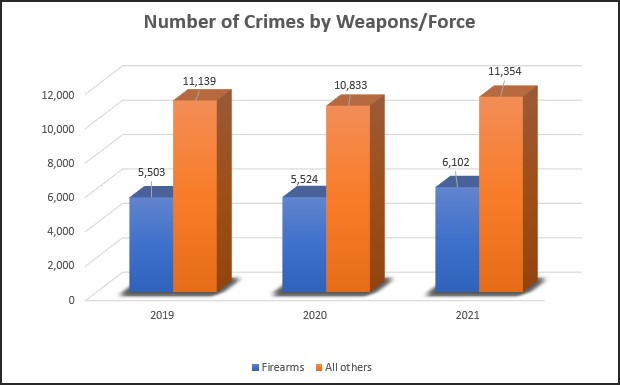 What role has the availability of guns played in the surge in violent crimes in Virginia over the past two years?

The graph above summarizes the data from the 2021 Crime in Virginia report. Over the two-year period, the number of firearm-related crimes increased 10.9%, while the use of all other weapons — from fists, feet, and teeth to knives, clubs and automobiles — increased only 1.9%. That indicates that Virginia’s bad guys were not only committing more crimes in 2021 than two years previously, but they were more likely to brandish or shoot firearms when doing so.

The data show clearly that guns are a growing problem, not a receding problem, in Virginia criminality. But the implications for public policy are anything but clear. 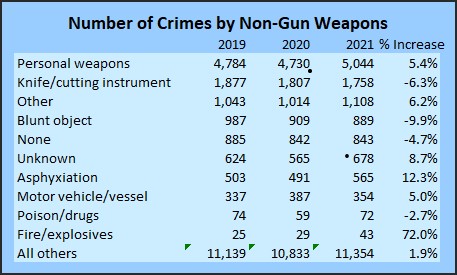 To satisfy the idle curiosity of Bacon’s Rebellion readers, I provide here a list of the many and varied ways in which Virginians assault, maim and kill one another with weapons other than firearms. (Personal weapons are fists, feet, teeth, and the occasional head-butt.)

Remember, Virginia Democrats passed and enacted a wave of gun reform legislation in 2020, and followed up with considerable tinkering in 2021. If those laws were targeting the underlying problems, one would expect the use of guns to have declined over those two years.

But quite the reverse happened… which probably explains why not one outlet in Virginia’s mainstream media has seen fit to report the fact that gun crimes were up, not down, in 2021.

Here follows a recap of the gun laws enacted in 2020 during the frenzy of the George Floyd protests and calls for criminal justice reform. These laws went into effect July 1, 2020:

More reforms, mostly technical, went into effect July 1, 2021. Among them were:

My interest here is not to debate any of these laws on their individual merits. None of them, to my mind, are terribly unreasonable — although, it must be said, I’m not a gun owner, so I don’t have a (hunting) dog in this fight.

The key takeaway is that enactment of these supposed reforms coincided with a significant uptick in murders, aggravated assaults and other assorted  crimes, which suggests that they were not targeting the real sources of gun violence. Legislators may be able to brag to their constituents that they “did something,” but that “something” missed the bulls-eye by a wide margin. Indeed, one might say that it missed the entire target.

Virginians must consider the possibility that the rise in gun violence stems not from easy access to guns but from a rise in criminality. Bringing down gun deaths in Virginia requires identifying and targeting the causes of that criminality — which may be heresy to legislators who blame violent crime on the guns and not the criminals.

This entry was posted in Crime , corrections and law enforcement, Gun rights and tagged James A. Bacon. Bookmark the permalink.