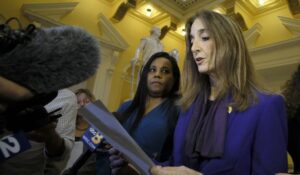 As the late Sen. Edward Willey of Richmond used to say, “The rules are written by those with the votes.” Leading up to the convening of the new GA session, there was some speculation that the House Democrats, newly in the majority, might make significant changes in the House Rules. In the end, they largely stuck with tradition.

The rules of a legislative body are important. They establish the framework within which the legislature process is conducted. For example, they establish the standing committees of each house, along with the number of members of each committee and how those members are selected. They set out the procedures for handling legislation on the floor. They are esoteric and a great sleep-inducer, but the legislators who master the rules have a great advantage over their colleagues.

All the publicity regarding the House rules was over the possibility that the Democrats would include some provisions prohibiting the possession of firearms in the Capitol and the Pocahontas Building, where the legislators have their offices and committee rooms. To no one’s surprise, the new proposed Rules did include such a provision.

There was a flare-up with the Senate whose members did not take kindly to the House taking it upon itself to adopt rules affecting the buildings in which they all worked. (As long-time observers of the G.A. know, rivalry between the two houses often transcends partisan lines.) But, in the end, they worked it out.

The only other substantive change in the House Rules was the addition of a requirement that the Committee on Rules establish a policy dealing with harassment on the basis of “race, sex, color, national origin, religion, sexual orientation, gender identity or expression, age, or … disabilities that extends to the public and to persons engaged with or employed by the legislative branch.”  The results of the establishment and implementation of such a policy could be interesting.

One interesting change, symbolic if not substantive, is the use of the pronouns “she” and “her” instead of “he” and “his.” I expected this change in reference to the Speaker and I was not too surprised with its usage regarding the Clerk of the House, because it was a foregone conclusion that both of those offices would be filled by women. However, I was not prepared for the use of “she” and “her” throughout the rules, to the exclusion of “he” and “his.”

For someone who was taught from early on that one should use “he” when the gender of the person being referred to is either unknown or could be masculine or feminine, this change is a little jarring. In effect, the House of Delegates is now saying that “she” could be used in the same manner. After all, the chairmen of some committees will be male, although the rules use “she” or “her” when referring to a committee chairman. Indeed, the final rule states: “Any word in these Rules used in the feminine includes the masculine or neuter.”

After thinking about this approach, I realized I like it. It is a better answer to this touchy issue than using “they” when referring to a singular “he” or “she.” Also, it is better than the awkward “he/she” that I sometimes use in writing. As a bonus, the House rules maintain the term “chairman” rather than using the despised (by me) term, “chairperson.” Therefore, I will continue to use the pronoun “he” and its variants, while sometimes also using “she” and its variants, when the person being referred to could be male or female.

The other changes made by the Democrats were primarily editorial in nature. In the new Rules, the word “will” has been substituted for “shall.” Perhaps “will” sounds less authoritarian than “shall.” Curiously, the Democrats do not seem to like hyphens. In the new rules, two-thirds becomes twothirds. This is not an isolated typo; there are several instances in which this format is used.

As far as the overall procedures are concerned, the rules of the House and the Senate are substantially the same. However, there are some major differences in some key areas:

Appointment of committee members. In the House, the Speaker has the sole power to appoint members of committees, along with their chairmen and vice-chairmen. This is a major source of the Speaker’s power  It is traditional that the delegate on a committee with the most seniority on that committee is named chairman, but there have been exceptions in the past. And Speakers in the past have used committee appointments to reward loyalty and to punish those who have been disloyal or have displeased the Speaker. (The Speaker made a gracious gesture by appointing her predecessor as Speaker, Kirk Cox, to Appropriations. Cox had been a long-time member of the committee before assuming the Speakership in 2018.)

For the Senate, the majority caucus submits a report listing the members to be on each committee, with the Senator listed first to be the chairman. Formally, the full Senate then adopts the report, thereby “electing” the members of the standing committees. In the case of the House, members must lobby the Speaker for committee assignments, while in the Senate there is undoubtedly wheeling and dealing within the caucus and, possibly, between caucuses.

Committee composition. The House Rules state that the membership of all committees, except for the Committee on Rules, shall be in proportion to the partisan make-up of the House as a whole. Also, the Speaker is directed “to strive” to appoint at least one delegate from each Congressional district to each committee. This has been a long-standing rule and, to their credit, the Republicans stuck with it in 2018 when their margin in the House decreased from about 20 to 2. The Democrats are reciprocating. On each  22-member standing committee, Republicans will have 9 members.

In the Senate, there is no effort at proportionality. Some committees have traditionally been significantly skewed toward the majority party. For example, in the 15-member Commerce and Labor Committee (to be chaired by Sen. Saslaw), which will take up the minimum-wage legislation, Democrats will hold 12 of the seats. In the last session, when the Republicans were in the majority, they had 11 of the 15 slots. Similarly, with the Finance Committee, the Republicans enjoyed a 11-5 majority in the last session; now Democrats will have the same majority split. Finally, while the House Rules make a conscious effort to provide representation to all parts of the state on each standing committee, the Senate rules say only that “consideration shall be given to the geographic balance in the membership of each Committee.”

Bill assignment. The Speaker oversees the assignment of bills to House committees. This is another source of influence for the Speaker. Committees can be stacked and certain bills can be sent there to die, as was the case in the past with gun control bills being assigned to the Committee on Militia, Police, and Public Safety. The Committee on Rules, chaired by the Speaker, traditionally handled mostly resolutions and bills and matters that affected the legislative process. After Kirk Cox became Speaker, he referred many controversial bills to the Rules Committee; there senior members of the Republican leadership could have more control over them. It will be interesting to see how Filler-Corn utilizes the Committee on Rules.

The Senate is more formal in its bill assignments. The Senate rules set out in detail the subject matter jurisdiction of each committee. Using these descriptions as a guide, the Senate Clerk assigns bills to committees. If any member objects to her bill’s assignment, the Committee on Rules resolves the dispute.

My favorite House Rule: No. 54. When addressing the House, a delegate must stand and “will confine herself strictly to the question before the House, and when she has finished she will sit down.” So direct and to the point.

The most violated House Rule: No. 60. “No member will, while the House is sitting, interrupt or hinder its business by standing up, leaving her place, moving about the Chamber, engaging in conversation…” As anyone who has observed the floor proceedings can attest, this one is ignored until the noise level and movement in the chamber get to the point that the Speaker will no longer tolerate and uses her gavel to restore order.

Most disappointing about the new House Rules are the changes that are not in them.

A chairman of a committee will still have the discretion to “determine when, and if, legislation will be heard before the committee.” The “when” is an important tool in several respects. For a bill that may be controversial, for example, the chairman could decide to bring it up unexpectedly, or with little advance notice, in order to catch the opposition off guard. Or, she could choose to not bring it up in a forum that would put pressure on her committee members. There have been numerous instances in which proponents or opponents of a bill showed up in force to voice their viewpoints when a bill was being heard by a committee only to have the chairman announce, after both sides had made their arguments, that the committee would not vote on the bill that day. No need to make the members actually take a position in front of all those angry citizens.

The “when” also enables the Speaker to control the flow of legislation on the floor. Because she appoints the committee chairmen, she has considerable leverage in coordinating when important or controversial bills are sent to the full House.

The discretion to determine “if” a bill is heard by committee means chairmen, figuratively speaking, can continue to stick a bill into a desk drawer, never to be heard from again. Similarly, the Speaker can determine, through the chairmen, whether a bill never makes it out of committee.

Several years after the Republicans took control of the House, they adopted the rule allowing a subcommittee to kill a bill, offering the justification that doing so saved a lot of time by relieving the full committee of having to consider a lot of legislation that had no chance of passing. The new rule did streamline the work of the legislature and eliminate the historic backlogs at the deadlines for the consideration of bills. But, it also meant that as few as three legislators (subcommittees could have as few as five members) could decide the fate of legislation. To ensure full and fair consideration, each bill should have a chance to be heard by a full committee, after being vetted by a subcommittee. It should be pointed out that Senate subcommittees do not have this power. The Senate Rules clearly state that subcommittees cannot take final actions; they can only make recommendations.

The House Democrats had a major chance to bring more transparency and accountability to the committee process. They failed to do so.