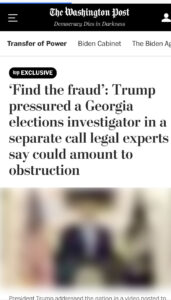 There are no words for the disgust I feel for The Washington Post right now.

Oh, it’s been listing left for years, eagerly reporting negative news about conservatives and their causes, while offering tongue baths to liberals.

But printing fabricated quotes to damage the president? That’s a new low.

Now we KNOW The Post printed lies about President Trump. And waited more than two months to correct them. Long after the damage was done.

How do we know it? The Post admitted it.

Remember the second impeachment of Donald Trump? Remember some of what was alleged? That he meddled in the Georgia elections, that he ordered officials there to “find the fraud” for him down there, that he promised an investigator that she’d be a “national hero” if she found the votes?

Here’s an inexcusably belated correction to that Washington Post scoop:

Correction: Two months after publication of this story, the Georgia secretary of state released an audio recording of President Donald Trump’s December phone call with the state’s top elections investigator. The recording revealed that The Post misquoted Trump’s comments on the call, based on information provided by a source. Trump did not tell the investigator to “find the fraud” or say she would be “a national hero” if she did so. Instead, Trump urged the investigator to scrutinize ballots in Fulton County, Ga., asserting she would find “dishonesty” there. He also told her that she had “the most important job in the country right now.” A story about the recording can be found here. The headline and text of this story have been corrected to remove quotes misattributed to Trump.

How convenient. Months after he’s out of office and impeached for the second time, the Post offers a correction, with a new dateline and scrubs the fake quotes out of the archived stories and headlines.

There’s a huge difference between urging an official to pay close attention to a certain jurisdiction where there was likely election fraud and ordering him or her to “find the fraud” which implied it should be conjured if it wasn’t there.

This is what happens when news outlets are so consumed with loathing for a politician that they abandon their own rules against relying on unnamed sources in order to damage him or her.

I don’t want to hear from Post apologists and Never Trumpers who insist that the gist of this story was accurate or that Trump’s December 23rd phone call was improper or that he deserved doctored quotes due to his mean Tweets.

That’s not the issue.

These were inflammatory quotes that appeared in headlines in many news outlets and were quoted widely during the impeachment proceedings and they were not true.

Frankly, the most basic rule of honest reporting is this: You never put quotation marks around statements you didn’t hear. If only The Post had followed this simple guideline for good journalism.

This is reporting 101. Reporters are meticulous about getting quotes right. They review their notes and examine quotes word-for-word to ensure accuracy, even when they contain grammatical errors or curse words.

Then again, The Post — once a national newspaper that prided itself on maintaining the highest level of integrity — was on a mission: To take down the president.

Back in the 1970s The Post did that with relentless reporting. This time they did it with fake quotes.

Any wonder so many don’t trust the mainstream media?