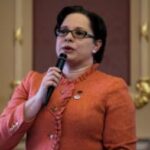 If you’re looking for craziness in Virginia, it’s not hard to find. By “crazy,” I mean disconnected from reality. Crazy people are commonly found among the homeless, in state mental institutions, and in the General Assembly. This gem comes from Sen. Jennifer McClellan, D-Richmond, during a televised Democratic Party gubernatorial debate.

“I had to have the conversation with my 10-year-old son last week when he asked me, ‘Mommy, someone not that much older than me was killed by a police officer. Could that happen to me?’”

“And I looked at him and said, ‘I will do everything I can to keep that from happening to you.’ Because there are too many people who call the police for help, and are killed. I had an intern who was in the middle of a mental health crisis, and his grandmother was afraid to call the police because she was afraid that he would be killed. There are too many people who are afraid of the police, and we have to address that problem.”

I’m sorry, but this is a distorted sense of reality. Philip Bump with the Washington Post, who is as woke as an over-caffeinated night watchman, counted 22 children killed by police since 2015. Of those, a quarter were White. That averages out to about three Black or Hispanic kids per year — three too many, to be sure, but not exactly an epidemic in a nation with 47 million Black people, and certainly no reason for any child to live in fear. If you factor out kids who were armed with guns or had the misfortune to live in Chicago, a free-fire zone, the odds of a 10-year-old getting killed by police in America are essentially zero.

Here’s what young McClellan should be more worried about. A headline from an article in today’s Richmond Times-Dispatch tells the story about crime in his home city: “Community pulls together for residents stunned by violence in S. Richmond.”

A split second before the gunfire erupted, Penny’s 15-year-old daughter tried to warn her mother and friends about the masked gunmen standing outside a nearby apartment building at The Belt Atlantic in South Richmond.

Penny and lots of other residents were outside that evening, April 27, enjoying the weather as the teenager hurried over to tell them to take cover indoors. But she could get only one word out — “Ma” — before the hail of bullets that killed Sharnez “Shy-Shy” Hill and her infant daughter, Neziah.

Three other innocent bystanders were wounded, including an 11-year-old girl and a 15-year-old girl. The 15-year-old, Penny’s daughter, was shot in the side and hand, but survived. …

“It was like we were in a war,” she recalled, sitting in the grass facing a memorial of red balloons and stuffed animals marking the spot where Hill fell. “It was a nightmare right here.”

Nyiaka James, who owns a catering company, has organized a Mother’s Day cookout to honor the victims of the shooting and support residents of their South Richmond community. Perhaps McClellan should attend. It would be good campaign optics. Moreover, she might get a dose of reality she doesn’t get conversing with woke politicians and journalists who live in safe neighborhoods and never encounter the violence that stalks inner cities. She could ask South Richmond residents if they’re more afraid of the police or the gang bangers. She could ask if they think their neighborhood is “over-policed” She could ask if she thinks having mental health experts on hand back at the police station would have saved Sharnez and Neziah from the ambuscade.

Here’s another reality. Police in Virginia, like elsewhere, are sick and tired of being portrayed as the bad guys. Retirements and resignations are up, and recruitment is down.

“We are not entering a crisis. We are in [a crisis],” said Brendan Leavy, a Richmond police detective and president of the Richmond Coalition of Police in an April public hearing about the pay scale for public safety workers. “Our veteran officers are leaving our department in droves. We’ve had over 70 officers leave in the last 10 months. This is not normal.”

McClellan is betting that reallocating funds from police to mental health will reduce the violence. Maybe. But she’s gambling with other peoples’ lives. I’d have more faith in her prognostications if she didn’t engage in so much crazy talk.

This entry was posted in Crime , corrections and law enforcement, Elections and tagged James A. Bacon. Bookmark the permalink.