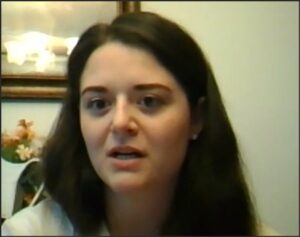 On July 17, 2020, Morgan Bettinger was driving home from her job along a street in Charlottesville that flanked the downtown pedestrian mall where an unlicensed protest was occurring. Demonstrators roamed the street, so Bettinger, a University of Virginia 4th-year student, got out and chatted with the driver of a city garbage truck, which was blocking the road. In a throwaway remark she said, “It’s a good thing you are here because, otherwise, these people would have been speed bumps.”

The quip evoked the death of Heather Heyer a few years previously during the Unite the Right rally when a White supremacist ran his car into a crowd of counter-demonstrators very nearby. Overhearing the comment, two bystanders interpreted her to be saying that protesters would make good speed bumps. Word quickly spread. Demonstrators aggressively followed her in her car as she slowly backed, asking, “Was that a threat?”

One thing led to another and Bettinger wound up in front of the student-run University Judicial Committee (UJC). In what she and her attorney Charles “Buddy” Weber view as a kangaroo court proceeding, she was found guilty of violating the University’s Standards of Conduct. The UJC expelled Bettinger from UVa but held the sanction in abeyance on the condition that she not violate the standards of conduct again. Her actions, wrote the UJC panel, were “shameful” and put members of the community at risk.

Given the tragic events of August 12 and the context in which you uttered these words, you disregarded Charlottesville’s violent history. A history you should have been cognizant of as a UVA student and resident of Charlottesville. During these proceedings you have shown no understanding of the risk this statement imposed.

Let us set aside the absurdity that a young woman returning from her babysitting job, accidentally encountering an unsanctioned protest and making a casual remark to a garbage truck driver, posed a risk to anyone. And let us not tarry upon the details of her travails: being lied about, labeled a racist, and punished for making a statement that some found offensive. (For details, see the letter, published last July in Bacon’s Rebellion, that her attorney wrote to UVa President Jim Ryan.)

In this column, I focus on how the student judiciary subjected her to compelled speech and political indoctrination as a form of penance. President Ryan has been outspoken for his support of “free speech,” welcoming former Vice President Mike Pence to the university and speaking out against cancel culture. Yet UVa is a place where someone whose speech offends the student judiciary can be coerced into making confessions of guilt and submitting to social-justice indoctrination.

To avoid expulsion, Bettinger had to fulfill the following orders.

Bettinger was working a full-time job as a nanny to pay the bills. By the time the UJC proceedings concluded, it was May 1, the academic year was nearly over, and she was eager to graduate. Although she objected to the conditions imposed upon her, she believed she had no choice. If she stood firm on her principles, she would not graduate.

The letter to Bryant was especially hard to stomach because the militant student leader had called her a racist, created a false narrative about her intentionally driving around police barricades and threatening the protesters, instigated her ordeal with the UJC, and called for her expulsion. Bettinger thought long and hard how to balance her version of the truth with something that would pass muster with the UJC. In the end, she threaded the needle this way:

I meant no disrespect to anyone. That being said, I understand that my association of the word speedbumps with the protesters may have offended some or triggered uncomfortable emotions in those who may have personally witnessed the tragic events of August 2017 in Charlottesville. For that I’m sorry.

She forwarded the letter to the UJC and that was the last she heard about it.

The terms of the order also required Bettinger to perform community service. But not just any kind. She had to serve organizations that did social-justice work.

Because she had to cram in so much work with classes and exams within a very short time, she couldn’t work with a single group. She had to spread her hours over several organizations whose schedules dovetailed with hers. Initially she proposed seven organizations in Charlottesville, including food banks, homeless shelters, and churches that served the poor. “The Bible makes social justice a mandate of faith and a fundamental expression of Christian discipleship,” she explained in an email to Nabeel Raza, the UJC student who oversaw her case.

Raza nixed the two churches. He accepted only secular organizations. She was in no position to object, so she complied.

In the third requirement, she met with Williams. The professor was cordial, and they worked out how she would “broaden her understanding” of police-community relations: by watching a series of events co-hosted by UVa’s Batten School and Law School relating to the trial of Derek Chauvin, the Minneapolis police officer who killed George Floyd by kneeling on his neck. The series included:

“Navigating the Derek Chauvin Trial for the Murder of George Floyd: At an Inflection Point — The Law & Policing.”

“Navigating the Derek Chauvin Trial for the Murder of George Floyd: Opportunities for Advocacy and Healing.”

“Navigating the Derek Chauvin Trial for the Murder of George Floyd: Reflecting on the Verdict.”

As the daughter of a Charlottesville police officer who was, by her recollection, widely loved for his service, Bettinger already had firm views about interactions between police and communities. As with the letter to Bryant, though, she tried to tell Williams what she thought he wanted to hear without repudiating her own beliefs and principles. At the end, he deemed her participation in the exercise adequate, the UJC certified her compliance, and she graduated on time.

As a postscript to the story, Bettinger sought to have the UJC conviction and sanction expunged from her record. Her attorney Buddy Weber and the Foundation for Individual Rights in Education (FIRE) appealed to UVa President Jim Ryan to override the UJC conviction. An independent investigation by the office for Equal Opportunity and Civil Rights (EOCR) had found that “no reasonable person” would have taken her words as a threat.

In a letter to Ryan, FIRE attorneys demolished the argument that Bettinger’s statement amounted to an incitement to violence.

The remark was not a statement of intent to commit future violence, as evident from its use of the past tense (“would have been speed bumps”) and conditional nature (“it’s a good thing that you are here because, otherwise…”). As the United States Supreme Court explained in the seminal Watts v. United States, the “conditional nature” of a remark, where it is a “kind of very crude offensive method of stating a political” viewpoint, renders it “political hyperbole,” not a “true threat.”

On August 10, 2021, Ryan wrote a letter rejecting the appeal. Under UVa’s system of governance, he said, the student-run UJC is entrusted with the administration and enforcement of the Standards of Conduct. “The President of the University does not have the authority to reverse the final outcome of the disciplinary process, and there is no precedent for the President claiming this authority.”

“I was not a fact finder or adjudicator in this matter, so I am not in a position to opine on the merits of the case,” Ryan wrote. “I do not believe it would be appropriate for me as President to intervene at this point.”

Correction: An earlier version of this post stated incorrectly that the Dean of Students found that Bettinger’s speed-bump comment could not be construed as a threat. To the contrary, he referred the incident to the Student Judiciary Committee.

This entry was posted in Uncategorized and tagged James A. Bacon, University of Virginia. Bookmark the permalink.