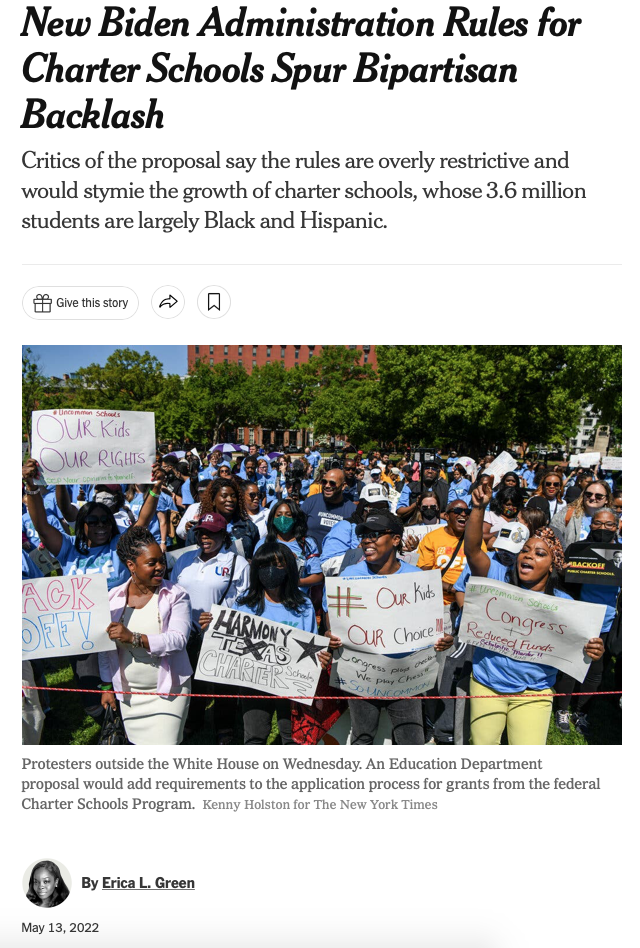 Probably surprising to many of my readers, one of the newspapers to which I subscribe is The New York Times. Another is The Washington Post.

Of the two, the Times demonstrates far more balance in its reporting. Not opinion – reporting.

Times education writers, direct witnesses to the astonishing achievements of New York City charter schools and their huge waiting lists, can be counted on to investigate and report stories that openly disregard progressive orthodoxy on such schools.

They reported on May 13 (adjacent picture) that opposition to charter schools disadvantages primarily poor minority children and is driving the support of poor and minority parents away from the Democratic party.

That is the message I have been trying to bring to the Youngkin administration.

The New York Times. This is not the Times’ first foray into the subject. See another headline from 2019.

The front-runners for the presidential nomination are moving away from the charter school movement, and black and Latino families ask why their concerns are lost.

At issue is the delicate politics of race and education. For more than two decades, Democrats have largely backed public charter schools as part of a compromise to deliver black and Latino families a way out of failing district schools. Charters were embraced as an alternative to the taxpayer-funded vouchers for private-school tuition supported by Republicans, who were using the issue to woo minority voters.

But this year, in a major shift, the leading Democratic candidates are backing away from charter schools, and siding with the teachers’ unions that oppose their expansion. And that has left some black and Latino families feeling betrayed.

The race and poverty industries. It is not only the Democratic Party that opposes charters, but also organizations whose entire focus is supposed to be minorities and the poor.

Beholden to the teachers’ unions more than to minorities and the poor, they oppose even charters designed to help the populations they claim to support, and they likely will in Virginia.

NAACP. In 2016, the board of the NAACP, citing concerns that charter schools contribute to racial segregation and deny public schools necessary funding, formally opposed charter schools. See the story on the United Federation of Teachers website.

Let’s look. In New York City, Success Academy, the most accomplished charter management organization in the nation, “contributes to segregation” as follows:

Across all 46 schools in the Success Academy Charter Schools network, which collectively rank in the top 1 percent in the state for academic performance, 94 percent of students are minority and 74 percent are low-income.

As for denying public schools necessary funding, charter schools are public schools. See an op-ed in the Los Angeles Times by a Georgetown University professor that deconstructs that argument in detail.

Charter schools should be authorized by local school boards with elected members accountable to the students, parents, and communities they serve—not appointed state officials.

To achieve such goals, Alabama should amend its charter law to require local school boards to authorize any charter schools operating in their district.”  (emphasis added)

They know that there is not a single urban school board in the country that, given the choice, will authorize charters they do not control and against which they must compete.

The lab schools mistake. The Youngkin administration is riding the wrong horse in its university lab school initiative, for which it is asking $150 million.

That honey pot certainly gets support from Virginia colleges, but promises nothing to poor and minority kids, much less those trapped in failed urban schools. They will turn into woke schools for the children of faculty and grad students.

Focus efforts to increase charter schools in Virginia on the charter management organizations proven to educate poor minority children to the highest standards and you will have a winner. Connect demonstrable needs to proven problem solvers.

It is past time to bring that debate to Virginia.

I recommend that the administration follow the advice of The New York Times and change the focus of its charter schools program with legislation to:

Dare Democrats and the professional race and poverty industry to oppose the legislation. It will prove their worst nightmare. They oppose charters now and likely will oppose the bill, but if so will be exposed as hypocrites.

I think it will pass.

Is Joe Morrissey going to vote against it? Chap Petersen? How about the Virginia Legislative Black Caucus? The current published agenda of that group:

the VLBC will fight efforts that undermine public schools in the name of school choice.

What if the choice is between existing bad schools and new excellent schools for Black children? Let’s find out.

Either way, it will be instructive to watch.