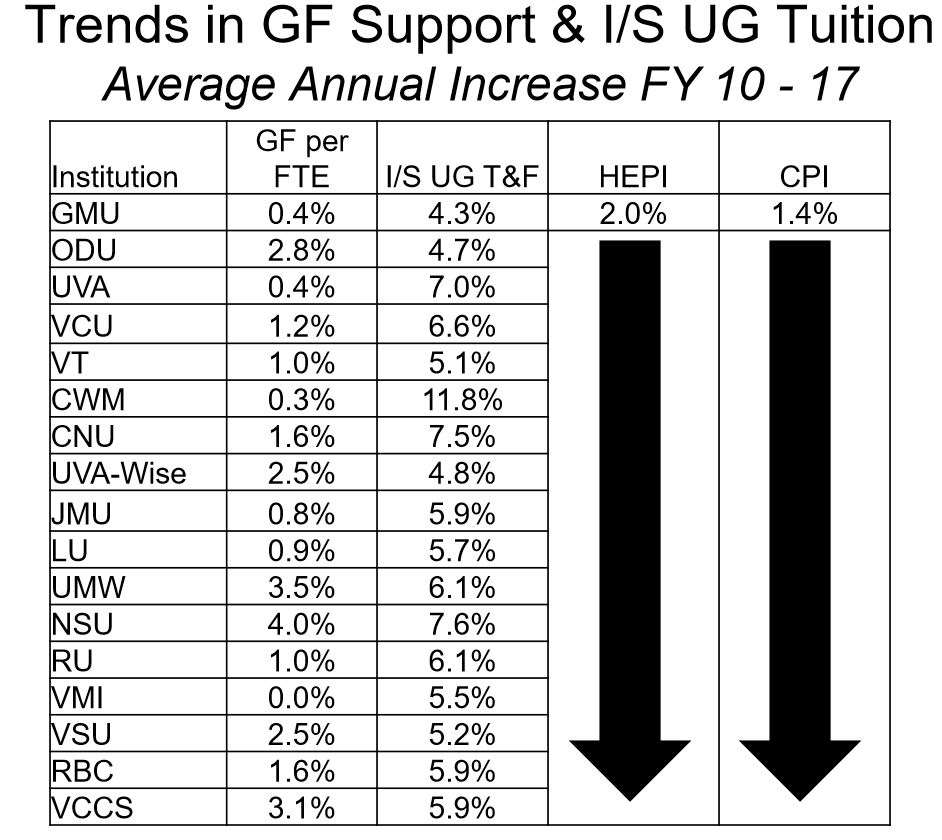 Increased pay for faculty and administrators is one of the major cost drivers behind the continuing climb in tuition and fee charges, a member of the House Appropriations Committee staff told that committee Monday.   As those charges climb, the universities are also increasing the percentage of tuition revenue used to provide financial aid for students being priced out, transferring costs from one group of students to the other.

Anthony Maggio’s presentation went into details missing from the State Council of Higher Education for Virginia’s own review of the cost increases.  His critical overview highlighted: 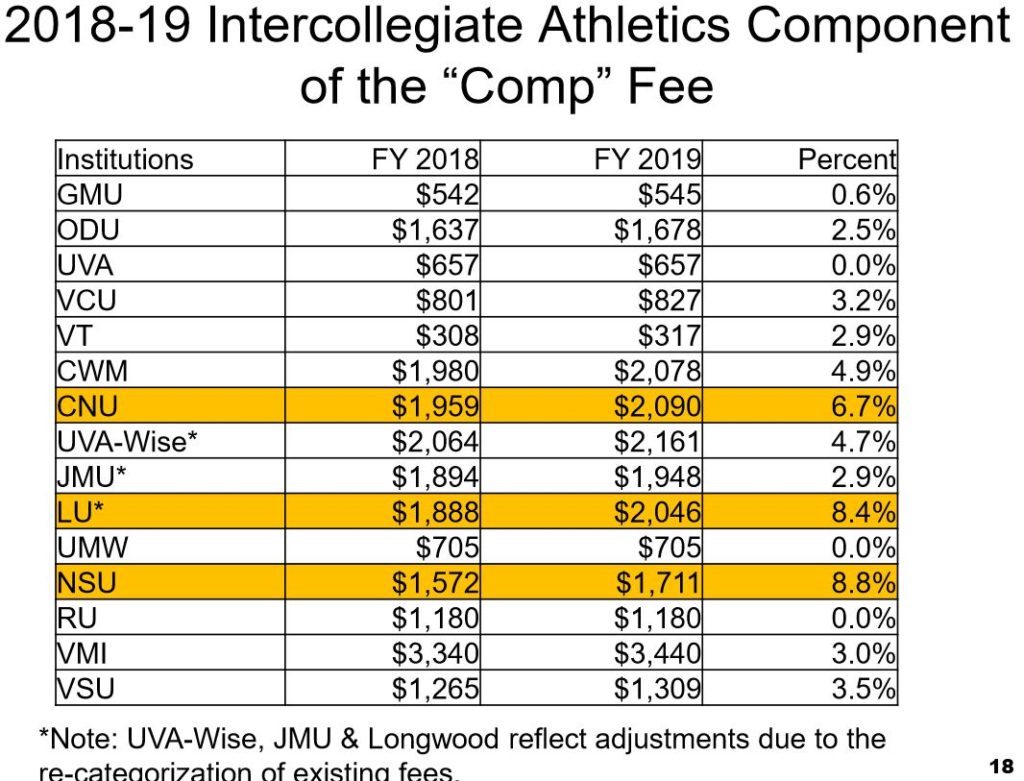 Maggio reported that Radford University increased tuition 7 percent instead of a planned 3 percent hike and blamed, among other things, enrollment loss and a commitment of funds to economic development activities.  The other schools that exceed their targets often mentioned salaries or fringe benefit costs.

The current state budget did not include additional state support for salary increases this fiscal year but waits until next year to fund the state’s share of those.  Maggio said about ten institutions have said they are moving forward with broad salary increases this year anyway, often citing concerns staff will leave over money.

Departing from his slides, he told about a prominent George Mason University law professor (unnamed) who left for the University of Chicago, prompting calls for higher salaries.  A later article in the Chronicle of Higher Education revealed the person left to be closer to family, and his replacement came to GMU from Chicago to be closer to the action in Washington.

“Yes, we need to be competitive,” Maggio said.  “We are competitive.  We may have gone beyond the pale.”

Christopher Newport University in Newport News blamed uncertainty over the state’s appropriations for its decision to exceed its target.  If those appropriations hold, CNU will use the tuition dollars to further increase the amount of tuition revenue it commits to financial aid.

At the University of Virginia and the College of William and Mary almost 20 percent of tuition revenue is used for financial aid, and at two other schools he listed the percentage as in the mid-teens:  University of Mary Washington and Virginia State University.  Three more are approaching ten percent.  Maggio also reported that in their six-year plans many schools earmark a high percentage of their new tuition revenue for this purpose, adding cost to both in-state and out-of-state students.

At William and Mary more than half of the new revenue from in-state students is earmarked for financial aid and 97 percent of the out-of-state increase is directed to that purpose, Maggio reported.

Two decades ago, if an institution received an allowance for indirect costs (overhead) with a research grant, 30 percent of that needed to go into the school’s education and general (E&G) operating fund.  In 2003 that was estimated to be about $30 million, but since then the schools received permission to keep 100 percent of the indirect money within the research program.

“Unless institutions have arranged for an internal cost recovery, the E & G program may be subsidizing the research activities which have grown significantly since the early 2000s,” Maggio wrote on his slide.  Then speaking into the microphone he doubted that such internal cost recovery mechanism is in place at most schools.

Looking forward to fiscal year 2020, Maggio said many of the schools shouldn’t have to increase tuition and fees at all, given the additional $75 million the state will be adding for them that year.  He added that 2 percent might be a more realistic expectation.  If that happens it would mark a radical change. 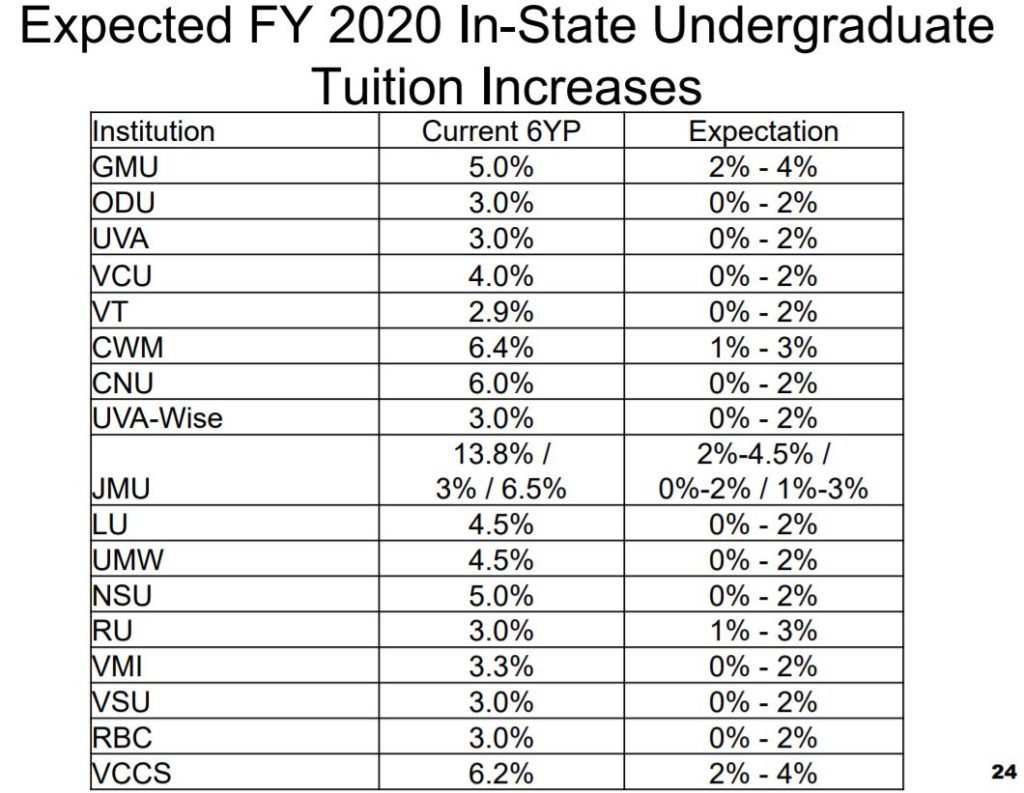 The projected FY 2020 tuition increase in each school’s six-year plan compared to what the House Appropriations Committee staff projects they need, given added state funding on the way and this year’s increases.  Who “expects” this is not clear.

This entry was posted in Education (higher ed) and tagged Stephen D. Haner. Bookmark the permalink.