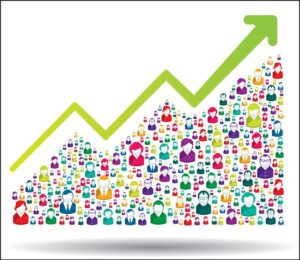 Governor Glenn Youngkin’s popularity in Virginia was the top-line story from a new Virginia Commonwealth University poll. The survey, published yesterday, found that 49% of Virginians polled approve of his job as governor compared to 38% who disapprove. It’s not surprising to see his popularity holding up so well. Virginians tend to be favorably disposed toward governors not caught up in scandal, and Youngkin is no exception.

The more interesting data from the poll was buried in the VCU press release. Two points stand out: attitudes of Blacks toward taxes, and attitudes of Whites toward Historically Black Colleges and Universities (HBCUs).

Leaving the plantation on taxes. Youngkin’s tax cut on gas is more popular among African-Americans than the electorate as a whole. The three-month elimination of the motor vehicles fuel tax garnered a 58% approval rating from all Virginians but 76% from Blacks. (Elimination of the state portion of the grocery tax was broadly popular across the partisan divide, with seven out of ten Virginians in favor. VCU did not break out the results for Blacks on that question.)

Virginians were fairly evenly split on what to do with Virginia’s surplus tax revenue. Overall, Virginians narrowly preferred to use the surplus for government programs “such as welfare programs or state-funded clean energy projects.” Needless to say, Democrats generally favored (68%) government programs, while Republicans generally favored (62%) a $250 tax rebate option. Here’s what startled me: 54% of Blacks favored the $25o rebate. Let that sink in: a majority of Blacks would take tax rebates over new welfare programs.

Blacks long have been a core constituency of the tax-and-spend party, but in Virginia now, they back tax cuts, at least if the tax cuts benefit them directly. They’re less enthusiastic about government programs and clean energy than Whites are. Educated, “progressive” Whites in the Democratic Party are driven by ideological causes. Most Blacks, I would postulate, are motivated by kitchen-table issues at odds with the progressive agenda. Whites drone on about “environmental justice” and “social justice” on everything from taxes to schools to crime, but a lot of Blacks aren’t buying it.

The nation is, as often argued on this blog, undergoing a tectonic shift in political loyalties. On one side we have the cultural/political elites and their welfare-state wards, and on the other side we have the working class and middle classes. It is in the political interest of the ruling elites to divide the nation by race and ethnicity because it benefits them at the polls. But most Americans, of all races and ethnicities, aren’t looking for a “progressive” racial utopia, they just want everyone to get along, and to see day-to-day improvement in their lives and a better life for their kids.

More support for HCBUs. In another interesting finding, the VCU poll revealed that 79% of Virginians support efforts to fund Historically Black Colleges and Universities (HCBUs). Support was highest among Democrats (94%) but hefty among Republicans, too (69%). Not surprisingly, Blacks overwhelmingly approve of the idea (96%), but support by other groups, including Whites, was very strong.

There are multiple possible explanations for the HCBU decline: from smaller graduating high school classes to financial hardship for Black households during the COVID pandemic. Here’s one you’re not likely to hear much about: increased competition from bigger, better-funded public universities. Literally every university in Virginia wants to increase its admissions of “under-represented” minorities. There are only so many college-bound Black kids to go around. If more are heading to Virginia Commonwealth University, Virginia Tech or the University of Virginia, that’s fewer to enroll in the HCBUs.

The big draw of HBCUs in the past was that they were, by their very nature, a hospitable and welcoming place for Black students. But every other university is striving to make itself welcoming to minorities as well. The HBCUs’ greatest competitive edge is eroding.

Here’s a wild and crazy thought: HCBUs may have a competitive advantage they may not fully recognize. As Virginia’s big public universities get increasingly “woke,” they are becoming intellectual monocultures. Students and faculty with conservative and moderate views feel increasingly stifled in an environment dominated by progressive ideologies. But HCBUs have nothing to apologize for. It makes no sense to accuse them of “systemic racism,” “white privilege” isn’t an issue on campuses with few Whites, and leadership has no need to engage in virtue signaling. HCBUs may well offer more intellectual diversity than the mainstream institutions, and may allow students to feel freer to express themselves. As polls repeatedly show, Blacks are more conservative on a wide range of issues — taxes, schools, crime, and culture wars — than progressive White elites. Perhaps there is a future for HCBUs as havens from wokeness.