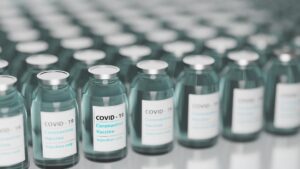 Image by torstensimon from Pixabay

Joltin’ Joe. President Joe Biden increased his planned administration of the Coronavirus vaccine from 100 million doses in his first 100 days in office to 150 million doses. Given that the United States is already distributing around one million doses per day Biden almost had to increase his plan if he wanted to make good on his campaign promise of an aggressive rollout of the vaccine. Biden added to his new plans by claiming that anybody who wants a Coronavirus vaccine will be able to get vaccinated by “spring.” Yet even Biden’s newly found optimism about the pace of vaccine distribution was insufficient for some people. An Op-Ed in the New York Times urged the president to strive for 200 million doses in his first 100 days.

Unfortunately, the planned acceleration at the Federal level will be of little use in Virginia unless the Commonwealth finds a way to accelerate its administration of the vaccines received. As of yesterday, Virginia was dead last in administration of the vaccines it has already received. Number fifty out of fifty states. Or, number 52 out of 50 states, D.C. and Puerto Rico. This miserable performance obviously renders any acceleration by the Feds moot in Virginia. If we can’t administer more than 42.22% of the vaccines we received at a one million doses per day at the national level, what good will it do for the Feds to go to one-and-a-half million doses per day or even two million doses per day? The case could easily and logically be made that the accelerated distribution of vaccine doses by the Feds should be limited to states that have shown the competence to distribute the doses they have already received. That would clearly exclude Virginia.

Wise King Ralph. Governor Ralph Northam and his administration have struggled mightily with Virginia’s response to the COVID-19 crisis. A partial list of problems includes:

Other governors, in more democratic states, are facing recalls over their mishandling of the COVID-19 crisis. Ralph Northam is fortunate that Virginia’s constitution does not allow for such actions by the citizens.

What now? Virginia’s Byrd-Machine-era style of government relies heavily on a strong implementation of Dillon’s Rule. This centralization of power in Richmond has allowed a small number of politicians to maintain a vice grip on Virginia. However, the COVID-19 crisis has begun to show the limits of our misconceived reliance on centralized state government. It was easy enough for our all-powerful state government to close all of Virginia’s schools one day last March but it’s proven extremely difficult to get all those schools reopened. Northam apparently believes that closing is a state function while reopening should be a local matter. The initial efforts to orchestrate vaccine administration centrally have failed. Now that function is being localized to health planning districts.

Meanwhile, the fops and dandies of our House of Delegates continue to meet remotely while still collecting their out-of-town per diems. Any employee of a private company who tried to do that would be terminated for cause where the cause would be “fraud”.

Virginians need to clean house at all levels of the state government and they need to do that house cleaning with a shovel not a broom. This fall will provide a good opportunity to start shoveling.