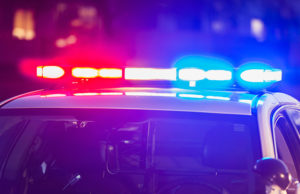 The Department of Criminal Justice Services has published its annual report on traffic stop data. In a recent article on this blog, Jim Bacon rendered his verdict on whether the data shows police bias in traffic stops: Still No Proof.

The report shows that, in the period of July 1, 2021, to March 31, 2022, Black drivers were stopped at a rate disproportionate to their estimated proportion of the Commonwealth’s total population. DCJS concluded there was, statewide, “moderate overrepresentation” of Black drivers in traffic stops.

Despite the finding of overrepresentation of Black drivers, the report is replete with caveats about the implications to be drawn from such finding. Specifically, the report says the finding of disparities “does not allow us to determine or measure specific reasons for these disparities. Most importantly for this study, this analysis does not allow us to determine the extent to which these disparities may or may not be due to bias-based profiling or to other factors that can vary depending on race or ethnicity.” The authors of the report go on to enumerate some of those other possible factors that could have influenced the disparities. It is upon this basis that Jim Bacon rests his verdict of “Still No Proof.”

Three high profile Democratic members of the General Assembly reacted angrily to the report’s conclusion that an analysis of the data did not, in and of itself, demonstrate that bias-based profiling was the reason for the disparities. “Obviously, bias is still a factor. It’s disingenuous not to arrive at that conclusion….It’s shameful but not surprising that Governor Youngkin continues to deny these truths,” fulminated Don Scott (Portsmouth), the House Minority Leader. He was joined in his indignation by Sen. Mamie Locke (Hampton) and Del. Jeff Bourne (Richmond).

There is a major problem in Del. Scott’s argument. The 2021 traffic stop report issued by DCJS under Governor Northam (Democrat) reached the same conclusions and had the same caveats as the 2022 report. In fact, the wording regarding whether the disparities result from bias-based profiling or other factors is identical in the two reports, although it is set out earlier in the 2022 report, and in bold print. Unless Delegate Scott and others levelled the same criticisms upon the publication of last year’s report (an Internet search failed to turn up any media reports of the report last year, much less any comments by critics), the comments this year can be attributed solely to partisan posturing.

The primary obstacle to measuring possible bias against a population is defining the size of that group. Ideally, when measuring bias against Black drivers, one would know how many total drivers and how many actual Black drivers there were in the jurisdiction during the time frame under consideration. Obviously, for many reasons, that is not feasible.

As an estimate of the number of drivers in a racial or ethnic group, DCJS used the estimated number of people over the age of 15 in that group as the benchmark. The report readily admits this is “only a crude measure of each group’s exposure to potential traffic stops.” Many of the shortcomings of this measure are obvious. They include:  poorer people are less likely to have cars; the cars of poor people are more likely to be in bad condition; older people either no longer drive or drive less; and some areas may have more people of another race or ethnicity driving through, who do not reside in that jurisdiction. However, as limited as it is, this is the best measure that is available.

In order to compare disparities between different racial/ethnic groups in traffic stops, DCJS standardized the data with what it calls a “Disparity Index (DI).”  The DI was calculated by dividing a group’s percentage of all stops by that group’s percentage of the total population aged 15 or older. For example, if Black drivers constituted 30% of the traffic stops in a jurisdiction and Blacks 15 years old or older were 25% of the population, the DI would be 1.2. DCJS used the following categorizations in its analysis: 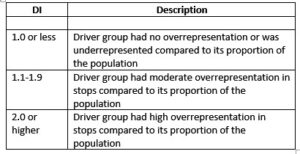 On a statewide level, the DI for Black drivers stopped was 1.6, the highest of any racial/ethnic group. Based on DCJS definitions, Black drivers were moderately overrepresented in the traffic stops in the Commonwealth.

The table below lists selected localities with a DI of 2.0 or higher. With two exceptions, many jurisdictions west of the Blue Ridge as well as other jurisdictions through which interstates run and which had a DI of 2.0 or higher, are not included. As the DCJS 2021 traffic stop report explains, using Carrol County as an example, the vast majority of the traffic stops in those jurisdictions may have been made on the interstate highway that runs through those localities. Therefore, the percentage of stops that were of Black drivers likely was much higher than the relatively small percentage of Black residents in the jurisdiction. (That explains the “dramatic” map noted by Jim Bacon in his article.)

The two exceptions to the exclusion of jurisdictions with interstates running through them are the counties of Arlington and Hanover. Those counties had a DI of 3.0 or higher, significantly higher than those of its immediate neighbors with interstate highways running through them. It is unlikely that law enforcement stops Black drivers traveling the interstate in those counties at a higher rate than in their neighboring jurisdictions. 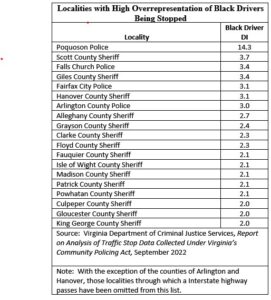 The legislation requiring the gathering of data for each traffic stop and the analysis of that data for evidence of racial bias was enacted by the 2020 General Assembly. The legislature that year also prohibited the use of minor equipment problems, such as a defective light over the rear license plate, as a primary reason for a traffic stop. Also, it prohibited searching a vehicle on the basis of the odor of marijuana. For years, Black advocates had complained that law-enforcement officers used these alleged violations as excuses to stop and search vehicles driven by Blacks at a much higher rate than those driven by other drivers. Ironically, the requirement to collect data on possible bias in traffic stops was enacted at the same time many of the pretexts allegedly used for such stops was placed off limits.

Another factor that may have affected the results of the analysis is missing data. DCJS excluded 17,176 records, almost three percent of the total records available, because the field indicating race/ethnicity  had been designated as “Unknown.” As the report delicately explains, “The uncertainty of the input coding for each “Unknown” race value means that there is no practical method to determine how many drivers labeled “Unknown” were actually perceived to be a certain race by the officer but such race was simply not recorded.” Another way of putting this would be that the law-enforcement officer involved did not want to be scrutinized on how he handled a stop involving a Black driver.

Yet, despite there being fewer primary reasons legally available for law-enforcement officers to make a traffic stop and despite the disqualification of a large number of records due to race/ethnicity data missing, DCJS still found evidence of moderate overrepresentation of Black drivers being stopped.

The DCJS report rightly says the data “does not allow us to determine or measure specific reasons for these disparities.” It explains, “The analysis of racial disparity is a complex field with many potential contributing factors.” Based on these caveats, Jim concludes there is no “proof” of racial bias on the part of law-enforcement officers in making traffic stops.

However, as far as law goes, “proof” is not a fixed concept. There are basically three standards of proof:

Because the data show that Black drivers were moderately overrepresented with a DI of 1.6, despite the disallowance of many reasons previously allowed for a traffic stop and despite the omission of thousands of records due to the race/ethnicity of the driver being “Unknown,” I submit that, based on a preponderance of the evidence, racial bias still exists in traffic stops in the Commonwealth, particularly in some localities.

Speaking of possible bias in some localities, Attorney General Jason Miyares should devote some of his time and resources investigating the possibility of racial bias in traffic stops in localities with a DI of 3.0 or higher. He has that authority under Sec. 2.2-520, which creates an Office of Civil Rights in the Office of the Attorney General with authority to “Inquire into incidents that may constitute unlawful acts of discrimination.” Something along these lines certainly seems to be going on in the city of Poquoson.

In fairness to Jim Bacon, he concludes his article with this statement: “We want to get to the truth of the matter. It’s wrong to sweep evidence of racism under the rug; we want to identify it and correct it where it exists…. Let’s find out if bias exists, where it exists and how acute it is rather than indulge in blanket accusations.”

I assume from this statement that he would not think there is enough evidence to meet the “preponderance” standard. To help get closer to being able to determine the role of bias in these stops, DCJS, in its 2021 report recommended that the legislation be expanded to include the following data:

Jim endorsed the gathering of that data.

Delegate Luke Torian (D-Prince William), the patron of the 2020 legislation, introduced legislation (HB 1142) in the 2022 General Assembly that would have expanded the data that officers would be required to collect at traffic stops to include those items listed above, as well as the following data:

The bill was killed in subcommittee on a 5-3 vote, with all the votes in opposition coming from Republicans. During the subcommittee discussion, most of the opposition to the bill centered on the additional time and cost for law-enforcement, particularly in small departments. There was some general allusion to technology being available to gather some of the information being requested.  In 2020, all 35 votes against the original bill were cast by Republicans. Although delegates Davis (Virginia Beach) and Webert (Fauquier) voted for the final version of the 2020 bill, they joined their Republican colleagues on the subcommittee in opposition to expanding the information collected. It would seem that a majority of the General Assembly Republicans are not interested in “getting to the truth of the matter.”

This entry was posted in Crime , corrections and law enforcement, Uncategorized and tagged Dick Hall-Sizemore. Bookmark the permalink.