Another Try for Natural Gas to Hampton Roads 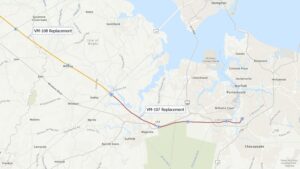 Natural gas pipeline companies have applied to federal regulators with another proposal to enhance supply into Virginia’s Hampton Roads region, despite the earlier failures of two similar high profile efforts.

Columbia Gas Transmission, part of TC Energy which is best known for the recently-rejected Keystone XL pipeline, is proposing to replace 48 miles of existing, 1950s-era, 12-inch diameter pipe with new 24-inch pipe. Compressor stations and other facilities would also be modernized. This proposal is being marketed as the Virginia Reliability Project and stays within existing right of way from Sussex County to Chesapeake.

Transcontinental (Transco), in a separate application to the Federal Energy Regulatory Commission, wants to add a 6.35-mile loop of new 24-inch pipe in Brunswick and Greensville counties, and improve a compressor there, allowing it to supply an additional 105,000 dekatherms per day to points east and south. It has been named the Commonwealth Energy Connector Project. 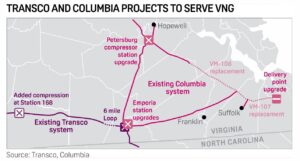 From the S&P Global story linked in the adjacent paragraph. Click for larger view.

To some writing for the energy trade press, the combined projects look like an effort to make up for the loss of the Atlantic Coast Pipeline, abandoned by Dominion Energy. It was to provide substantial new supply to regional retailer Virginia Natural Gas. Following that retreat in the face of environmental opposition and a change in attitude by elected Virginia leaders, the VNG Header project was also abandoned. Will this third proposal fare better?

The Atlantic Coast Pipeline and VNG Header Projects had successfully negotiated their way through the FERC process and hit the wall later. Now may be different. As previously reported the Biden Administration’s new FERC appointees have added a stronger focus on preventing expansion of greenhouse gases.

In its initial comments filed with FERC in March, the Biden Administration’s Environmental Protection Agency also went straight to that issue:

If there is any softening in attitude toward natural gas projects in the Biden Administration in response to the energy issues highlighted by the Russian invasion of Ukraine, the EPA officials behind this 7-page letter (submitted well after the war started) don’t show it.

Compressor stations have been the focus of prior debates and permit battles, and these proposals seek to address some of the past controversies by moving to emissions-free electrical-driven compressors, rather than machinery run off the gas in the pipes. That, of course, also leaves more gas in the pipes for the actual customers down the line.

The Teamster’s Union has a letter in the file endorsing the project, as long as it is built under a union contract, asking FERC to insist on a project labor agreement.

The project’s published schedule has construction starting in 2024 and gas flowing in 2025. The same promotional page includes the following:

Enhancing the system to meet existing and growing needs will create significant positive economic impacts across the region to offset the more than $4 billion lost in economic growth over the last five years due to a shortage of available natural gas supply. (Emphasis added.)

Is there hard evidence the failures of the Atlantic Coast Pipeline and VNG Header Project have had measurable, negative economic impacts on Virginia? Can advocates for the region show the state has lost the opportunity to attract businesses because its natural gas supply was constrained? If so, details of that economic damage should be released and might help change some minds among those blindly following the “we need no more fossil fuels” mantra.

This may be Virginia’s last chance to show it is not relentlessly hostile to natural gas. State regulatory agencies will also have a role in the approval processes, and under the Ralph Northam (D) Administration their hostility was palpable and effective. The Glenn Youngkin (R) Administration has a chance to send a different message about Virginia’s openness to an “all of the above” energy approach.