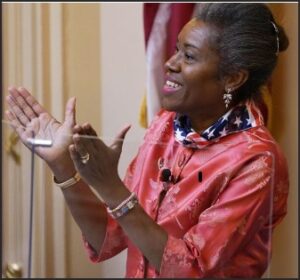 No question about it: the Democrats won the expectations game. Republicans convinced themselves that they would sweep to victory in a Red Wave Tuesday, but they fell drastically short. It appears that the Rs will gain control of the House of Representatives and they still have a shot at squeaking out a majority in the Senate, but Democrats are the ones spiking the football in the end zone.

Fair enough. The party that controls the White House traditionally suffers far bigger losses. The Dems dodged a bullet, and no one can blame them for exulting.

What I find interesting, though, is that Democrats are treating the election as a vindication of their policies and rhetoric. They weren’t repudiated; therefore, they were vindicated. Accordingly, I have seen no self-reflection, no sign that Democrats see a need to change course.

Republicans are the ones undergoing intense self-examination. And, as exemplified by remarks by Lieutenant Governor Winsome Sears yesterday, they are concluding that it is time for former President Trump to retire from the political scene.

Sears, who chaired a 2020 group called “Black Americans to Re-elect the President,” said the disappointing mid-term elections made it clear that voters want a different leader. “A true leader understands when they have become a liability,” she said on Fox Business. “A true leader understands that it is time to step off the stage, and the voters have given us that very clear message.”

Trump has signaled his intention to run for re-election. “I could not support him,” Sears said.

A significant percentage of Republicans held their noses when they voted for Trump in 2020, disliking his persona but generally approving of his policies and reacting negatively to the Russian Collusion Delusion and other Democratic mendacities. But the president lost considerable support when he disputed the election outcome, and even more for going Missing in Action during the Jan. 6 riot. While few Republicans bought the Democratic narrative that the Capitol riot was an “insurrection” that Trump plotted in concert with the Proud Boys and other right-wing radicals, there was no denying his role in stirring up the crowd and no explaining away his hours of passivity as the riot unfolded. For millions of Republicans, those two facts were sufficient to disqualify him from ever serving as president again.

Trump has done himself no favors since then. Trump-endorsed Republican candidates generally under-performed Republicans in the mid-terms by wide margins. The electorate didn’t reject Republicans Tuesday, it rejected Trump Republicans. Further, when Trump slammed Florida Governor Ron DeSantis — who racked up the most spectacular election-to-election voting gains anywhere in the nation — he vividly showed his true colors. A supreme narcissist, Trump is envious of other Republicans’ success. He’d rather see the party torn apart than rein in his ego.

And tearing the party apart is likely what will happen. Trump’s loyal, devoted following is a core constituency of the Republican Party. He potentially has the power to reduce the Party to rubble. But if DeSantis or — and I bring up his name only because he is mentioned so often by the national media — even Governor Glenn Youngkin can figure out how to maintain the Trump coalition without Trump, Republicans potentially can emerge stronger than ever.

The one thing the GOP has going for it at the moment is that Democrats are interpreting the 2020 election as a popular endorsement of their policies. It wasn’t. For better or worse, Republicans will reinvent themselves. Democrats will not.

Update: Having pissed off all Democrats and most independents, Trump now is doing his best to alienate mainstream Republicans, including Governor Youngkin. In his latest sub-sophomoric rip on the Truth Social social media site, he said, “Young Kin … sounds Chinese, doesn’t it,” while also making the dubious claim that he helped Youngkin win his election. Youngkin won the election by distancing himself from Trump without explicitly repudiating him. It will be interesting to see if Youngkin takes the same step as Sears and publicly announces a breakup.

Trump is losing it. If we liken him to a Greek tragic figure, he’s in the final phase in which the protagonist meets his end.

This entry was posted in Elections, Politics and tagged James A. Bacon. Bookmark the permalink.