America’s Petroleum Refining Capacity in the News – What is Going On?

This is a note about perhaps the highest profile national inflation issue, the price of gasoline and diesel.

The President is demanding more supply from U.S. refineries.  Headlines like this one blare at us today:

The letter behind such headlines, which is exactly what it seems to be, was sent to the largest refiners in the country.  Among other things, the President wrote:

My administration is prepared to use all reasonable and appropriate Federal Government tools and emergency authorities to increase refinery capacity and output in the near term, and to ensure that every region of this country is appropriately supplied.

I looked up the data on oil refining that Mr. Biden’s Energy Information Administration has published.

From the numbers on American refinery input and capacity, Mr. Biden will need more than “emergency powers” to increase refining output.

He will need a a genie.

The input and capacity units are thousands of barrels (42 gallons) per calendar day of petroleum.  Here is the spreadsheet of monthly figures since 1985.  The last published data was from March, but it tells us a lot.

The component of operable capacity that is in operation at the beginning of the period.

Represents the utilization of the atmospheric crude oil distillation units. The rate is calculated by dividing the gross input to these units by the operable calendar day refining capacity of the units.

The President referred to capacity and output.   But output is constrained by not just capacity, but also by input volumes and costs.

People not associated with the oil industry tend to think of oil producers and refiners as integrated – the Exxons and Chevrons.  Most of them are not.  Most exploration and production (E&P) companies are just that.  Most refiners are just that.  As are nearly all pipeline companies.

When gas prices are high we tend not to remember when they were low.   For a look at the variations of input prices over time, I offer the chart below of the peaks and valleys of the price of West Texas Intermediate.

Volatility, thy name is crude oil. 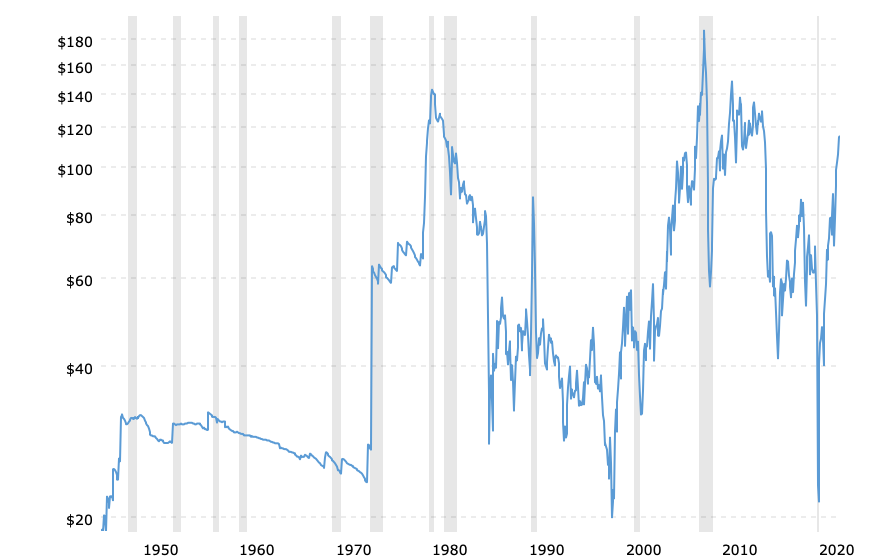 Both E&P companies and investors in new refineries have to try to plan to make money despite those fluctuations.  Operational refineries deal with them. So do  oil field service companies who provide and service the rigs.  When price is down, drillers can’t or won’t borrow to invest and supply goes down.  Service companies lay off workers and lose money anyway.  Tough business, oil.

If supply goes down too much, which it always does, it drives price back up and the cycle begins again.

That pipeline was to take heavy Canadian tar sands oil to U.S. refineries on the Gulf Coast that could process it in place of heavy Venezuelan crude.

For those that will argue “that was only one pipeline”, put yourself in the places of investors in the oil industry. The political risk became so high with the political ascendency of the greens in the Democratic party that, after the Obama Keystone decision, long term investments in major new refineries were not made here.

The spreadsheet shows that Gross Input in March was the third highest recorded in that month since 1985.  So input might be increased a little, but not much.

Now look at the idle capacity in March, the last month for which data are published and the first month of the war in Ukraine.  On the spreadsheet you will see that from September of 2021 to March of 2022, idle capacity was reduced over 90% – before the letter.

In March of 2022, the total idle refining capacity capable of being put into operation in 90 days was 220 thousand barrels per day.  Historically on a monthly basis since 1985, that is about half of the average idle capacity available.

So American refineries can expand capacity if they have the input to use it, but not by a lot.

Bigger picture. I offer readers an article from June 5 that may help with the bigger picture.  It surely has something to fire up every side of this debate.

The investment calculations of the energy companies are explained by Mike Worth, the CEO of Chevron.

You’re looking at committing capital 10 years out, that will need decades to offer a return for shareholders, in a policy environment where governments around the world are saying, ‘We don’t want these products to be used in the future.’ So even if a company like Chevron was willing to commit the time and capital to build a refinery, it doesn’t make sense given the shift toward cleaner alternative energy.

The President, at least right this moment, cannot tell Mr. Worth how to invest his shareholder’s money.

As for the more pure play refiners than Chevron, the article informs that:

Marathon recently formed a joint venture to build a $2 billion renewable fuels project, while Valero is accelerating the expansion of its Diamond Green Diesel project to finish it by the fourth quarter of this year.

Even that story did not mention that the nation’s oil company work force is one of the oldest we have and is not being replenished.  What kid wants to set his sights on a future in the oil industry when he is being told in school and in the press it is evil and that it will be out of business in a decade?

So the energy companies are moving on from petroleum refineries – a triumph for the greens and the President’s publicly sworn enmity to the industry.

The Mainstream Media.  Publicly jawboning American companies to increase petroleum refinery capacity and output in the United States will get headlines from the MSM.  Mission accomplished.

But don’t look for detailed MSM follow-up stories.  Except to tell us that the oil companies did not make major increases in refinery output, ignoring the President, who tried so hard to look out for us.

I’m going to guess that conditions before the letter was written – input and capacity being nearly maxed out and the oil refiners switching investments to alternative energies – will not come up.

What now for the President?  Perhaps price controls are next.  But of course those have always worked to reduce supply.

Venezuelan oil?  The Gulf Coast refineries that used to specialize in that very heavy oil have already expensively converted to use lighter American crude.

So the President has reportedly authorized what little Venezuelan oil that is now produced to be shipped to Europe to be refined.  Problem is that the output of the Venezuelan oil industry collapsed after the U.S. companies that used to run it left.

The Saudis?  Mr. Biden told them to drop dead.  Finding they did not, he will visit them soon to ask for both forgiveness and an increase in oil production.

Damn, this President job is tough.

The left can take a victory lap. For readers on the left, just like Mr. Biden, you are winning.

Six- or seven-dollar regular gas, seven- or eight- dollar diesel, higher prices for everything refinery products are used to plant, manufacture and move and deep recession are what winning looks like.