Air Conditioning Is Not a Luxury 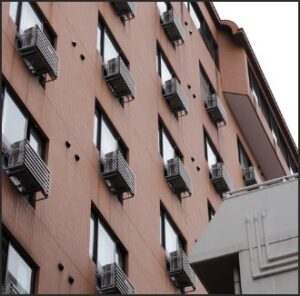 I don’t know why more people don’t visit cemeteries when they’re on vacation. You can learn a lot by strolling among the old graves.

When my son went to school in Buffalo, New York I found my way to Forest Lawn Cemetery, a graveyard so beautiful that weddings are held there.

President Millard Fillmore’s final resting place is in the leafy park-like setting. So is Alfred Porter Smithwick’s, the dentist who invented the electric chair. But I walked up and down the rows of headstones looking for Willis Carrier’s. He invented the first electric air conditioner in 1902 and died in 1950.

Every summer I try to scribble a little homage to Carrier. After all, without him summertime would barely be survivable in this tropical swamp of Southeastern Virginia.

I should know. I spent the summer of 1985 in a stifling garage apartment at the Virginia Beach oceanfront. Second floor. Low ceilings. Small windows. No air conditioner. My landlord insisted the ancient electrical system couldn’t handle the load.

As summer baked on, I bought fan after fan until they covered every surface, making it impossible to read a newspaper and putting my cat’s tail in perpetual peril.

The next summer, I defiantly bought a small unit and installed it in a rear window where no one could see it. If the wiring burst into flames I planned to jump out one of the tiny windows and enjoy the breeze on the way down.

It was fine and I was no longer slick with sweat from Memorial Day to Labor Day.

Yet instead of celebrating the invention that allows people in southern locations to live in comfort during the summer months, climate activists often point to AC as an energy-slurping luxury. They fear that rising temperatures will result in depleted energy sources.

The crazies want you to feel guilty about cranking up the AC. Don’t fall for it.

Get a load of what they think of AC at left-wing outlet, Vox:

What if the most American symbol of unsustainable consumption isn’t the automobile, but the air conditioner? In cool indoor spaces, it’s easy to forget that billions of people around the world don’t have cooling — and that air conditioning is worsening the warming that it’s supposed to protect us from.

There are alternatives: We can build public cooling spaces and smarter cities, with fixes like white paint and more greenery. …as the planet warms and more of its inhabitants have spare income, AC sales are increasing. Ten air conditioners will be sold every second for the next 30 years, according to a United Nations estimate.

Oh please. White paint is no substitute for AC.

Rolling Stone was even more hostile to our desire to remain cool. In a piece headlined “Our Air Conditioned Nightmare” last summer, they wrote this immortal line:

Now that we’re in the middle of a heat wave — hey, it’s July, heat happens — climate kooks are blaming the high temps on manmade climate change and insisting that the growing need for air conditioning will make it much worse.

They’ve got it backwards. Study after study has shown that it takes more energy to heat homes than cool them.

So the migration from northern states like New York to Florida in recent years should result in overall energy savings.

So lower your thermostat and enjoy the refrigeration this summer. Tell the folks bleating about wasted energy that if they’re serious about conserving energy, they’ll shut off the heat next winter and bundle up.

This entry was posted in Uncategorized and tagged Climate change, Kerry Dougherty. Bookmark the permalink.