Mark Herring is so proud of himself that he took to Twitter yesterday to do a little preening.

Virginia’s attorney general even put those silly flashing light icons at the top of his post so you’d know this was really big news. 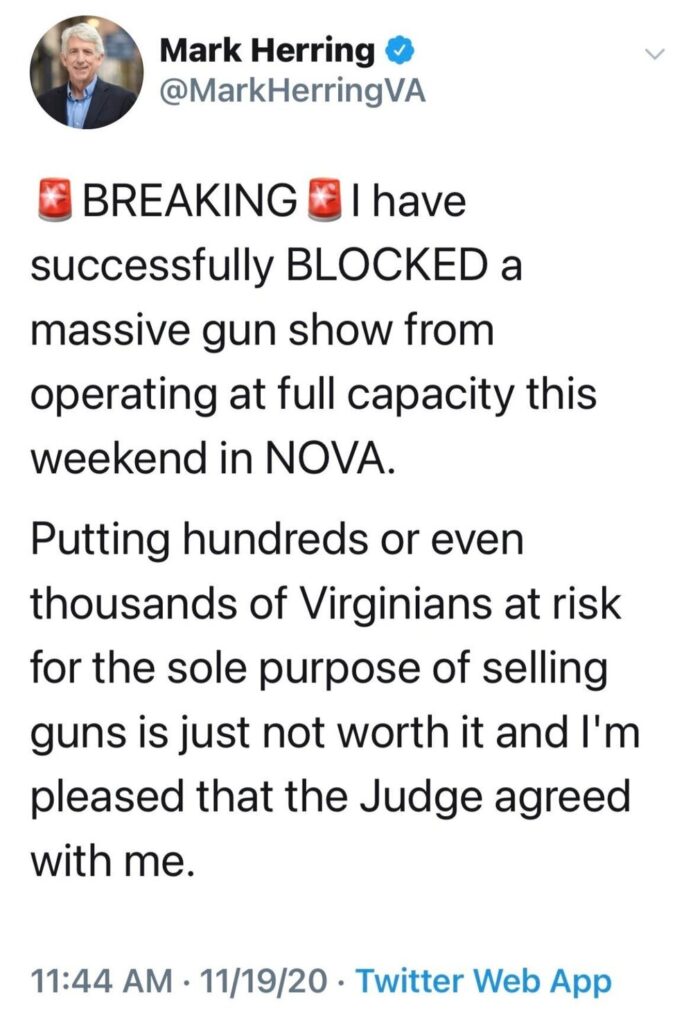 Yep, Herring’s chuffed because he successfully stopped Virginians from buying firearms this weekend. A big victory for Richmond’s anti-gun crowd.

This had nothing to do with COVID-19. The pandemic was just a convenient excuse.

Herring essentially shut down a popular three-day Northern Virginia gun show that had already put into place rules for reduced capacity, masks and social distancing, as they had for two earlier shows this year.

According to the website for The Nation’s Gun Show, the Fairfax County Health Department told the promoters on Wednesday morning that they could operate as a brick-and-mortar retail establishment. Like the Walmart across the street from the Dulles Expo Center in Chantilly.

But later that same day Gov. Ralph Northam and Herring got in on the act, classifying the gun show as entertainment and limiting attendance to 250. You know, like a football game.

It’s unclear what authority these two have to label a sales event as amusement, but seizing power and expanding his authority is what Northam seems to do best.

The Dulles Expo Center is 130,000 sq ft building and the Walmart beside us is an 80,000 sq ft. building, we are 50,000 sq ft. bigger. The Walmart beside us has one giant aisle and the all the rest of the aisles are an average of 6ft or less. We have wider aisles, 14 ft average, so we have more space to social distance. Also, our show and the building management are self-imposing a 50% occupancy limit.

We are bigger and better able to social distance. We limit our occupancy, everyone wears a mask and follows the COVID REQUIREMENTS. We have also had two shows already and have not been a super spreader. All we ask is that we are allowed to operate on the same type of business model and at the same level as the Walmart across the road. We are not entertainment and amusement. We will have at our show roughly the same number of people that will be going through any average Walmart in the state of Virginia and across the country every weekend.

According to The Richmond Times-Dispatch:

The lawsuit offered theories as to why the order exceeded the governor’s authority, but Judge Brett Kassabian rejected them all at a hearing Thursday morning.

While he said he was sympathetic to the fact that show organizers and vendors stand to lose millions of dollars, Kassabian said, “To allow thousands of people to roam unchecked in the throes of the worst pandemic in 100 years is not in the public interest.”

Be honest. The only difference is the merchandise.

This entry was posted in Gun rights, Regulation and tagged COVID-19, Kerry Dougherty. Bookmark the permalink.