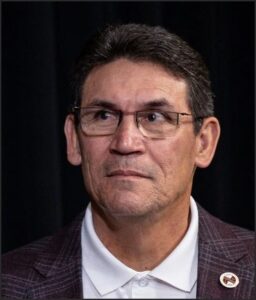 Last week, Jack Del Rio, the defensive coordinator for the Washington Commanders (formerly known as the Redskins) created a mini-furor when he referred to the Jan. 6 riots at the U.S. Capitol a “dust up.” His remark proved to be the proverbial straw that broke the camel’s back, effectively killing (for now) a legislative initiative to create a special taxing authority for a Commanders football stadium in Virginia.

While Del Rio screwed up by minimizing the significance of the riot, I expressed worry in a column last week that the Commanders organization would be punished for a comment made not by the CEO but by an employee tweeting in his private capacity.

Well, the assault on free speech and free expression just got worse. Calling the events of Jan. 6 an “act of domestic terrorism,” head coach Ron Rivera fined Del Rio $100,000. The next day Del Rio deleted his Twitter account. In a groveling pander to critics, Rivera also described Del Rio’s comments as “extremely hurtful to our great community here” in the D.C./Maryland/Virginia area.

Nobody cares about “hurting” my feelings, and I don’t particularly care about the feelings of those who have filed and honed the exquisite delicacy of their own sensitivities into weaponized spear tips. But I’ll tell you what’s worrisome. It’s worrisome when you apply after-the-fact standards, never enforced before, to punish an employee for expressing his opinion in a private capacity. It’s worrisome when you describe the events of Jan. 6 — “an act of domestic terrorism” — that’s every bit as ill-considered as the comment you’re criticizing. “Domestic terrorism?” How many people did the Jan. 6 protesters kill?

I never had much respect for the Commanders organization to begin with. The football team has been a tax-sucking parasite for as long as I can remember. Now, in a desperate bid to revive his latest parasitic tax-sucking scheme, owner Dan Snyder has aligned himself ideologically with the Left and punished the expression of free speech. Reminder: the Washington Commanders football franchise is estimated to be worth $4 billion.

Several points need to be made.

Rivera shouldn’t be casting stones. His characterization of Jan. 6 is as off-base as Del Rio’s. To be sure, the riot was a lot worse than a dust-up (in Del Rio’s words). It was a riot. Some participants in the riot had the express aim of disrupting the casting of electoral votes that would make Joe Biden president. But “domestic terrorism?” I’m sorry, terrorists kill people or hold them hostage. The protesters were violent, but they didn’t kill anyone. The vast majority, in fact, were peaceful. In that sense — and it was the sense of Del Rio’s tweet — Jan. 6 is very aptly compared to the “mostly peaceful protests” of the summer of 2020.

Rivera does not believe the comparison is valid. “Lives were lost,” he said. Yes, indeed they were. Ashli Babbitt was fatally shot by a Capitol Police officer. Rosanne Boyland appeared to have been crushed in a stampede. One protester died of a heart attack, and another died of a stroke. There is no justification for the rioters’ actions, and those who engaged in violence should be tried and punished. But a dozen or more people died in the 2020 “mostly peaceful protests” — I don’t think anyone has made an exact count. Plus, countless numbers were injured, and property damage has been estimated as much as $2 billion.

The difference between the mostly peaceful protesters in the summer of 2020 and those of Jan. 6, Rivera contends, is that the aims of the George Floyd protesters were noble while those of the Jan. 6 rioters were not. “Our organization will not tolerate any equivalency between those who demanded justice in the wake of George Floyd’s murder and the actions of those on January 6 who sought to topple our government.”

Millions of other Americans are asking the exact same questions. Millions of Americans agree that there are two sets of standards — one for those aligned with the political/media class and another for the peasants with torches and pitchforks. Likewise, millions of Americans take note that people, like Del Rio, who express views like theirs get punished and suppressed, while those on the Left rarely do.

Rivera conceded that Del Rio “does have the right to voice his opinion as a citizen of the United States and it most certainly is his constitutional right to do so. However, words have consequences and his words hurt a lot of people in our community.”

This is the old words-have-consequences argument — the First Amendment protects against government censorship, not private ostracism or retribution. That is true, as far as it goes. But Americans have long tolerated the right of people to say disagreeable things. When the little people disagree with those in power today, however, their words are branded “disinformation” or outside the bounds of allowable discourse, and simply suppressed. The suppression flows one way. The voices being suppressed almost always are conservative.

If the Washington Commanders are any indication, Corporate America is lining up with the Political Class and media elite because that’s where the power is. If you aren’t frightened by this, you should be.

This entry was posted in Culture wars, Individual liberties and tagged James A. Bacon. Bookmark the permalink.