Affordable Housing: Thinking Outside the Container 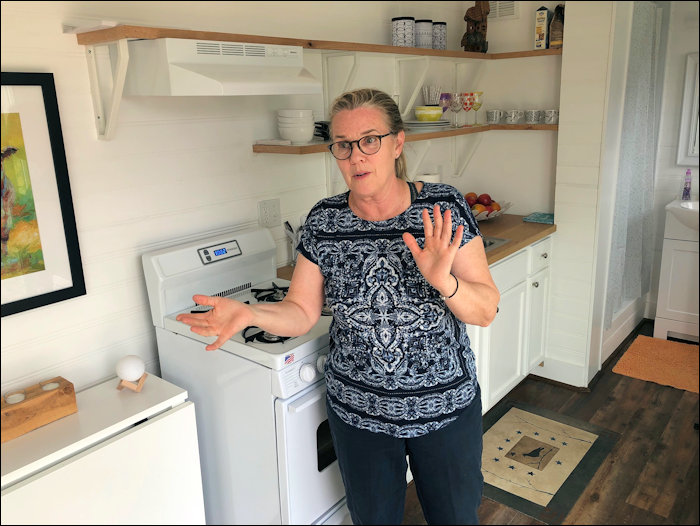 Sheila Gunst shows off the kitchen in a modified, 320-square-foot shipping container.

Sheila Gunst estimates that there are 33 million cargo containers around the world, half of which are empty. Many of the empties languish in United States because China ships $400 billion more in trade goods to the U.S. every year than the U.S. ships back. After making multiple trans-oceanic trips, used containers stack up in port cities like Norfolk by the thousands.

And therein lies a business opportunity. The shipping lines can recycle them as scrap metal… or sell them to someone like Sheila, an interior designer living in the Richmond area, who dreams about refashioning them into inexpensive dwellings.

The idea of converting shipping containers into housing is hardly new — you just don’t see much of it in Virginia. Other than a six-container Shrimp Shack restaurant under construction in Chesterfield County, you see almost none of it in the Richmond region. But container dwellings comprise a hip new housing type that is increasingly popular among Millennials around the world and is inspiring architects to do marvelously creative things with big steel boxes.

Hipness aside, container housing is a potential source of housing for lower-income households who have been priced out of the housing market in Virginia’s larger metros. Once manufactured housing techniques are applied, Sheila suggests, a 320-square-foot unit would cost about $50,000 to make habitable. An extra $20,000 would buy solar panels, electric storage batteries, and a water-filtration system that would allow someone to live off the grid.

Many Americans would recoil at the idea of living in steel-frame dwellings that are only eight feet wide and 40 feet long. But containers, like Tiny Homes and other small square-footage housing, arguably are superior to slum housing, public housing, or no housing at all. The container on display behind Sheila’s Powhatan County farmhouse has a small but functional bathroom, a kitchen, a sitting/dining area, and a bedroom — cramped by middle-class standards but certainly adequate for one or two people. Due to the modular nature of the housing, two or more containers can be easily joined to create added living space.

The biggest barriers to lower-income housing in Virginia do not include the ability of entrepreneurs and innovators to manufacture housing for an affordable price. Financing a $50,000 structure over 25 years at 4% mortgage rates costs about $3,000 a year. Throw in insurance, real estate taxes, amortized land, utility hook-ups, and transaction costs, and you’re talking about maybe $6,000 a year, or $500 a month. There are two problems. One is that the banking industry has not yet structured a mortgage tailored to container homes. The other is finding a place to put the houses. The lack of affordable housing in Virginia is mainly a political problem, not an economic problem. More on that in a bit…

Sheila started playing with the idea of converting freight containers into housing a decade ago. She was intrigued by the idea that the steel structures designed for stacking nine-high on ships could be stacked on land also. She loved the idea that they could be arranged in an astonishing array of configurations — as stand-alones, in rows like row houses, stacked like apartment buildings, or in creative ways that would be impractical with conventional housing.

A few years ago, she began thinking about making containers that could support life off the grid — equipped with solar panels, batteries for electricity storage, waste recycling, and water recycling. Someone might want such a dwelling as a mountain getaway, a hunting lodge or a survivalist retreat in the event of a societal cataclysm. One thought led to another: If a container house could be designed to operate off the grid, it could be shipped into hurricane or earthquake disaster zones as intermediate-term emergency shelter.

Taking money from her interior design business, Sheila has installed three containers behind her Powhatan County farmhouse and started learning what it takes to insulate the containers, add partitions, run utilities, and install appliances. Ten-year-old 40-foot containers cost about $2,000 each down in Chesapeake and cost about $500 each to transport to the Richmond area. She got her son to cut out the doors and windows and hired tradesmen to do the rest of the work. Going up the learning curve hasn’t been cheap, but after seeing how efficient manufactured housing is, she believes a container house designed to hook up to conventional utilities would cost about $50,000 to complete.

Sheila’s husband, Sidney Gunst, has watched her hobby/enterprise with great interest. Best known for his development in the 1980s of Innsbrook, the Richmond region’s largest office park, Sidney has given great thought in recent years to using urban design to address social problems — especially affordable housing and workforce housing. With a ringside seat on Sheila’s endeavors, he became entranced by the idea of using container houses to create inexpensive dwellings.

Container houses around the country meet the structural requirements of city and county building codes. Indeed, the metal casing makes them structurally sturdier than stick-built or manufactured housing. The drawback, says Sidney, is that owners of traditional single-family dwellings will raise holy hell to prevent container houses from plunking down in their neighborhoods. But he thinks there is a solution to that problem.

Every metropolitan area has vast acreage dedicated to industrial and commercial uses that are being re-purposed. As e-commerce chips away at shipping centers, as malls go out of business, and as aging office parks slowly empty, there is plenty of room to put the container houses without offending the delicate sensitivities of residential neighbors. Richmond’s Scotts Addition, a light industrial park transitioning into a mixed commercial-residential-restaurant district, is proof positive that young people have no problem living amidst mixed land uses.

Sidney sees another possible niche. A classic real-estate conundrum is what to do with land purchased for speculative purposes. A would-be developer might snap up a parcel even knowing that he might not develop it for 10 years. Traditionally, such landowners have tried to eke a marginal return while they wait by using it for parking. But what if they could plop down a couple dozen container houses instead? When the parcel is ready to be developed, the container-houses could be moved with very little loss of value.

Sidney’s ever-fertile mind throws out other scenarios. How about installing container houses as temporary workforce housing at large manufacturing facilities, or setting them up at community colleges and technical centers. Students could learn their craft — welding, carpentry, plumbing, electricity — by building the houses right on campus. And, then, when they’re finished, they can live in them!

Compare the cost of $50,000 containers to the $250,000 cost that the Richmond Redevelopment and Housing Authority expects for building new public housing units (which may be larger in size). And think how the containers could be scattered here and there around the metropolitan area rather than being concentrated in long-festering pockets of poverty. The trick, says Sidney, is to loosen up city and county zoning codes — or to find niches such as commercial and industrial districts where the presence of people living in containers would generate minimal protest.

“Local governments have to be on board,” he says. “But the opportunity is too good to pass up.”

Full disclosure: Sheila and Sidney are close personal friends of the author.

This entry was posted in Housing, Land use & development and tagged James A. Bacon. Bookmark the permalink.