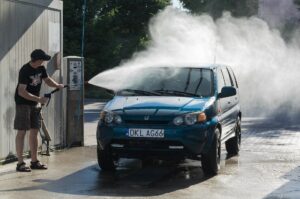 Spring in Virginia politics is like the daily pollen car wash. It’s that morning muck that cakes up the windshield worldview.

This is when political campaigns send out unmitigated crap attack ads that make no sense but try to instill just the tiniest element of angst and fear in order to generate a negative response towards an otherwise decent person.

The Virginia GOP dominant majority in General Assembly actually managed the Commonwealth well over the last twenty years as it had to work with a Democratic governor 75% of the time. But eventually, the engine of innovation wears down. They could use some of the Ideas Retreats of the past vs. conventions which boil down to who is more pro-gun, anti-gay, or anti-abortion. As if there are no other issues that matter to Republican convention goers.

On the other hand, we have many Democratic candidates who seem content on coming up with Elizabeth Warren-level of detail in their policy proposals.

The only problem there is that many of these ideas are just plain bad for business. Really bad, unless you work in the economic development departments of the Carolinas, Florida, Georgia, and Tennessee. Also really expensive and without a shred of intellectual honesty in how to pay for or implement them in way that passes judicial review.

Such is the nature of our republican democracy devoid of federal fiscal sanity better known as The Grand Buffet of Policy Pleasure.

So, what happens is that the campaigns and candidates take a holiday from reality as both parties resort to middle school-level tactics destined for the social media toilet.

Republicans attack each other for being too close to China if a candidate dares order Kung Pao take out, while Democrats deploy demographic purity tests which will inevitably lead them all to release their DNA spittle results from Ancestry.com.

Just yesterday morning, I received an email from Unite Conservatives VA attacking former Delegate Tim Hugo for being too close to Big Tech given his professional livelihood of working on science and technology policy. Scary stuff. The guy actually feeds his family while accumulating more than a rudimentary level of knowledge about the largest industry of the future. (This group will be hanging their heads in shame later this week by the way…)

Tuesday, I was forwarded a text exchange where Democratic Lt. Governor candidates were engaged in determining who was actually African American. Sean Perryman claimed that he was the only African American in the race. His campaign staffer, Jess, wrote this text in a blast:

Sean is the only Black candidate in a crowded field, has a progressive vision, & will make sure VA works for everyone.

The only problem with that is that two of his opponents disagreed vehemently that Perryman is only black candidate. That’s because Xavier Warren is African American and Delegate Hala Ayala is Afro-Latina.

Cue the Ancestry spit-test outrage on social media threads. Soon we will hear attacks like Republican or Democrat In Name Only devolve into Not Black Enough (NBE) or Not Baptist Enough, Very Hispanic but Lapsed Catholic complete with outrage hashtags.

Seriously, can any candidate run on safe and paved streets, good schools, and economic growth?

Meanwhile the rest of us — the top 99% — are “mad as a march hare” getting ready to bust out of our COVID caves in search of adults ready to take on the real challenges we actually face that don’t require piling more debt on our kids’ credit cards.

Apparently, our economy needs rescuing from its dismal 6.2% unemployment rate and historically low interest rates. Who’s going to rescue the kids in 30 years (if we make it that long)?

During vacation I had a conversation with a construction company co-owner whose wife is the lead compliance officer at one of the largest casinos in Louisiana. Given the relationship with casinos and Native American tribes, the Bureau of Indian Affairs is heavily involved in their regulations. She manages that.

Well, the casino recently had to shut down. Not because of a COVID outbreak mind you, but rather because the employees didn’t show up to work. All but one — ONE — didn’t show up for work because…. they had received their recent stimulus checks.

Yup, their grandkids and great grandkids paid them not to work.

Back at the ranch, House Democrats are actually considering overturning a state certified congressional election from Iowa and unseating a woman from Congress. This comes during Sydney Powell’s moonwalk back from her flat out lies about the 2020 presidential results.

In sum — again sadly — both major political parties are trapped in pre-pubescent remake of Lord of the Flies. Lies and excessive exaggerations for the sake of cable ratings, clicks, and fundraising have shoved out sanity.

It’s absolutely stunning how we allow these people to continue this escape from the decisions that obviously have to be made.

Imagine an oncologist saying, “Let’s see how large we can get this malignant growth before we decide anything. Sound good?”

This column is published with permission as an excerpt from Chris Saxman’s Substack account.