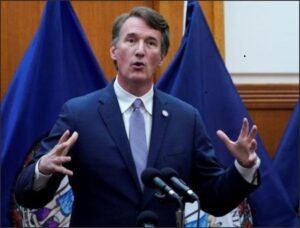 Educational outcomes in Virginia have been trending negative since 2017, says a report issued by the Youngkin administration today, “Our Commitment to Virginians: High Expectations and Excellence for All Students.”

So… how does Team Youngkin plan to get things moving in the right direction?

Broadly speaking, the answer is to raise expectations and raise standards.

In the Youngkin administration narrative, a succession of Republican and Democrat governors built one of the best public education systems in the country by setting ambitious goals and holding schools accountable. Beginning around 2017 concerns over racial disparities in academic performance prompted policies that, though well meaning, had the effect of watering down standards and hiding failure. Youngkin is determined to restore the commitment to excellence.

“The future prosperity of our Commonwealth depends on how well we prepare our students,” the Governor said in a prepared statement today. “Working alongside parents, teachers, and policymakers, we will restore excellence in education and ensure that all students have access to quality education opportunities that prepare them for success in our workplaces, our communities, and our democracy.”

The report details seven “guiding principles” for reforming Virginia’s education system. The challenge will be applying those principles to the lumbering bureaucratic process for revising policies and practices, even as considerable authority is vested in the State Board of Education, which is stocked with Northam-era appointees, and autonomous school boards which engineered the very policies that Youngkin seeks to reverse. Superintendent of Instruction Jillian Balow, who hails from Wyoming and has had little time to build political alliances, partnerships and friendships, will have her hands full.

The guiding principles are (quoting verbatim):

High expectations. All students deserve to be held to high expectations aligned to the needs of the knowledge economy. We will prioritize resources for those students and communities furthest behind and teach comprehensive history.

Empower parents and teachers. Parents are their child’s first and most important teacher. They must be an integral player in our education systems. Next to parents, having a quality teacher is the greatest determinant of a child’s success. Great teachers must be celebrated and rewarded.

Freedom of speech and inquiry. Our institutions of learning will embody a commitment to free speech and the exploration of diverse ideas. Our democracy rests on the foundation that education must teach every generation how to think, not what to think.

Zero tolerance for discrimination. We will not allow the ascribing of traits or behavior based on race, gender, political beliefs, or religion. We will reinforce that every person has a right to reach his or her full potential. Education should provide them with the tools and knowledge to do so.

Post-secondary readiness. Learners must be empowered with multiple pathways to post-secondary success, including apprenticeships, internships, workforce training, dual enrollment, and other opportunities.

Transparency & accountability. Our education systems will be held accountable for preparing all learners for success in life. This requires an emphasis on evidence and transparency.

Innovation. There is excellence in education in Virginia, but there are many children who have not had access to that excellence. We will create a culture of innovation that breaks the “one size fits all” education model by increasing school choice. (e.g. lab schools)

So, what does this mean in practice? The fact is, enormous inertia is built into the educational system, and power is distributed widely. The Youngkin administration does not have the authority to change key educational standards willy-nilly.

Consider, for example, the controversial issue of SOL “cut scores,” the number of questions a student must answer correctly on a Standards of Learning test to be considered proficient in a subject. Working groups, traditionally dominated by teachers, review the matter to be mastered and the tests created by an outside vendor. The vendor makes recommendations for what cut scores it takes to maintain continuity with previous years’ tests. The evaluators can submit their own recommendations, as can the Superintendent of Instruction. At the end of the process, the decision rests with the State Board of Education (SBOE), whose board members rotate on and off every four years. Youngkin has not yet announced his selections for the SBOE for the first cohort to join the board July 1.

Most controversial in the current political environment will be history and civics, the content of which unavoidably reflects, to some degree, the political and ideological views of those who are shaping the standards. The Youngkin administration has said it will seek input from a broader group of stakeholders than in the past, not just educators, but academics, business and civic leaders, museum administrators, and parents, while also consulting best-in-class standards from across the country. In an interview with Bacon’s Rebellion, Balow cited an Arizona State University framework for discussing history and civics as an example that might be emulated

“The result will be better history standards than we’ve ever had,” Balow says. While the review process will be informed by the guiding principles, she declines to predict the outcome of the process regarding particularly volatile topics such as slavery, segregation and racism. Providing no evidence, critics have accused Youngkin of wanting to ban the teaching of unsavory aspects of Virginia’s past altogether. Balow responds that the Governor is committed to teaching history “comprehensively” — even the “tough subjects.”

One thing the administration has accomplished is purge the Virginia Department of Education website of “inherently divisive” concepts tied to race, including ideas derived from Critical Race Theory. But to Balow, that’s ancient history. The administration is forward looking. The focus, she says, is achieving excellence in education and addressing the racial achievement gaps.