Yes, the Virginia Beach Gang Shootings Should Be Investigated 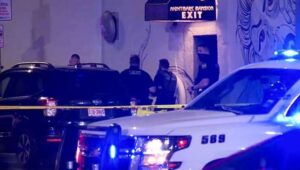 Delegate Jay Jones, D-Norfolk, and other state legislators have called upon Attorney General Mark Herring to conduct an investigation into the shooting death of Donovon Lynch by a Virginia Beach police officer during a wild exchange of gunfire at the Oceanfront a week ago. Herring had said he supported a Virginia State Police investigation, but Jones, who is running against him for the Democratic Party nomination for attorney general, wants something more high-profile.

Any time a citizen is killed by a policeman, an inquiry of some sort is called for. Given political realities today, an investigation outside the normal intra-departmental review is prudent if the victim is African American. Under the curious circumstances of this particular incident — the policeman had failed to activate his body camera — it is not unreasonable for Jones and his friends to demand an even closer level of scrutiny.

But if there is to be an investigation, let’s not focus solely on the one shooting. Let’s dig into the entirety of what happened at Virginia Beach that night, in which one other person was killed and eight were injured, including a policeman who was struck by a car.

If you’ve read the news accounts, you probably jumped to the same conclusion that I did — that the victim was unarmed and black and the policeman was white. And you’d be wrong. Our intrepid blogging colleague Kerry Dougherty found out details that never made it into the mainstream media. I quote from her blog post:

Sources close to the investigation say the African-American officer who shot the suspect fired after seeing the suspect rack his gun and point it in his direction over a hedge. The officer shouted for the man to drop his weapon. When he didn’t, the officer fired three rounds that struck and killed the suspect.

The gun was not “in the vicinity” of the suspect as originally reported, I’m told, but at the dead man’s feet.

Police also found 59 shell casings in a parking lot at 19th Street where one of the shootings occurred.

Got that? The victim was armed and aiming at the officer. The officer himself was black. In other developments — these were reported by the mainstream media — it turns out that (a) disorder at the Oceanfront is nothing new, and (b) that the Virginia Beach police force, with 500 officers and detectives, is about 100 men and women short.

It is frustrating to watch how politicians and pundits have hijacked the narrative, says Brian Luciano, president of the Virginia Beach Police Benevolent Association, in a letter to City Council members. “The same men and women who were out that night and every night, and who are willing to risk their lives for strangers, now find themselves having to defend their actions. Actions that took place in a quarter of a second and under circumstances that would send others fleeing in terror.”

The actions of the officers this night should be commended, not condemned. Once again officers ran into gunfire. They rendered aid to the wounded. They coordinated rescue efforts. They comforted the panicked. They searched for the perpetrators under hostile conditions and at great risk to their safety. The officers responded to the chaos started by criminals. They did exactly what you ask and expect of them. We have not heard a public acknowledgement of this from many of you. We have yet to hear concern for the officer run over by a
car. …

What occurred that night seems to come as a surprise to everyone but the police officers. I assure you that this increase of violence has not happened over night. A decade of neglect has helped lead us here. The concerns brought forward by the PBA over the last decade have been ignored, marginalized, and explained away as mere gripes from “disgruntled” employees, even by some in our own command structure. The warning signs have been obvious for anyone willing to see them and willing to listen.

And there’s more…. What happened last week was not a replay of the Greekfest riots of many years back. The offenders were not college kids. They were gang-related, says Kerry, who has been giving heavy coverage to the incident on the radio show she co-hosts. Many are armed. Some have worn face masks. They take over an area of the Oceanfront, intimidating tourists and shop owners. Police are constrained not only by manpower shortages but the tactics they can employ to maintain order.

In other words, the shootings do not fit the white-cop-shoots-unarmed-black-man template. It’s a complicated story.

Once that reality sinks in, I predict, Del. Jones will lose interest because he will no longer have a cudgel with which to beat Herring in a nomination contest in which the candidates are racing to out-woke the other. I could almost feel sorry for Herring, who says he has no power under the law to do any more than what he is doing. But Herring has done so much race baiting himself, my sympathy level is zero. Live by the sword, die by the sword.

Bacon’s bottom line: Let’s have that investigation. Let’s get all the facts on the table before they dribble out, the mainstream media loses interest because the facts don’t fit the Oppression Narrative, the public never gets the full picture, and there is no chance of fixing anything.

This entry was posted in Crime , corrections and law enforcement, Politics, Uncategorized and tagged James A. Bacon. Bookmark the permalink.