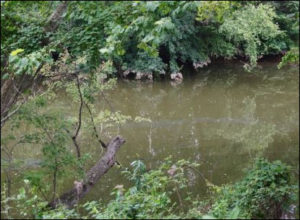 Waterway in Dutch Gap Conservation Area depicted in SELC report. If you were a thirsty hiker, would you dip your canteen into this water? Would you drink water like this all year long?

A new report by the Southern Environmental Law Center finds that pollution from Dominion Energy’s Chesterfield Power Station may be leading to an increased health risk for some of the 200,000 visitors to the nearby Dutch Gap Conservation Area. States a press release announcing the release of the study:

Or, as summarized by the Richmond Times-Dispatch:

The consultant estimated that elevated levels of toxins such as arsenic in the park could result in an additional 700 to 900 cases of cancer per 1 million people. The standard for pollution remediation set by the Environmental Protection Agency sets the limit at 100 cases per 1 million people.

“It is time to move beyond this claim that there is no health or environmental risk at Chesterfield,” said Nate Benforado, attorney at the Southern Environmental Law Center. “This report raises some serious red flags about the long-term safety of leaving ash in leaking, unlined pits next to a popular park.”

The Times-Dispatch does quote Dominion spokesman Robert Richardson as criticizing the study. The SELC, said Richardson, “should be ashamed of itself for blatant fear mongering. They have taken our data that we shared with state and local officials, our customers, and the general public and compared it to a standard that has no legal or scientific relevance to water suitable for recreational use.”

Let’s take a closer look at the study. Unfortunately, the T-D article does not explain what standards Richardson is referring to. A reading of the study, prepared by Terra Technologies Environmental Services, makes it obvious. The report uses drinking water standards as a measure to assess the risk to recreational visitors to the park. To quote from the study:

Several water quality criteria (WQC) were selected as screening levels. The public water supply (PWS), risk-based tapwater screening levels (tapwater RSLs), and maximum contaminant levels (MCLs) were used as screening levels, in addition to the VA Other Surface Waters (OSW) criteria on the assumption that if the waters were acceptable as a long term drinking water source, all potentially relevant contaminants of concern (COPCs) would be identified.

The report justified the application of drinking water criteria to park visitors on the following grounds:

During swimming, boating, fishing, and other water contact activities — activities that are all offered at Dutch Gap — small amounts of water can be ingested and skin exposure can allow uptake of some contaminants as well. In addition, people visiting or camping in the area could wash their hands, bodies, or camp dishes using the surface water. Therefore, using the PWS to assess potential screening level risks due to incidental contact is appropriate.

Here’s the problem: Drinking-water standards such as Public Water Supply (PWS) standards, are based on the assumption that people drinking the water do so on a continual basis throughout the year. The SELC study is applying those standards to campers, hikers, and kayakers who visit Dutch Gap episodically and may or may not imbibe any water at all. Indeed, common sense suggests that almost no one drinks water straight out of the river. The idea that minute quantities of toxins and carcinogens might enter the body as the result of the water’s contact to the skin has no medical basis. And the volume of toxins and carcinogens that might enter the body after river water has been used to clean dishes, is likely too small to even measure. If there is evidence to suggest otherwise, it is not presented in the report.

So, Richardson’s umbrage, to my mind, is entirely justified.

Comparing apples to oranges. There is one more important point to be made here. While the level of contaminants is, in fact, elevated (although not to the point to represent a threat to recreational visitors to Dutch Gap) and arguably does pose a threat to aquatic wildlife (a point the SELC could legitimately point to), it arises from a decades-old system for storing coal ash. But SELC is not using the elevated contaminant levels merely to criticize the legacy storage system, which Dominion has proposed replacing by de-watering the coal ash, consolidating it into a single impoundment, and capping it with a synthetic liner to prevent rain water from migrating through. SELC wants Dominion to recycle the coal ash, remove it far from the river, and place it in a lined landfill at a potential additional cost of a billion dollars or more.

Maybe Dominion’s proposal will prove effective at eliminating all water contamination, maybe it won’t. SELC has argued plausibly that ground water might migrate through a small portion of the impoundment and leach minute quantities of heavy metals from the ash. But the potential for water contamination from Dominion’s proposed cap-in-place remedy indisputably would reduce the risk of contamination reaching the James River. It is irresponsible and reckless to stoke fears of hundreds of cancer deaths — wildly hyped fears, at that — based on contamination resulting from the aging coal ash storage system that is being phased out.

I have always considered SELC to be one of the more reliable environmental organizations whose attorneys and spokespersons are careful with the facts and shun hyperbole and unsubstantiated statements. This study is a sad departure from the group’s usual standards. The SELC’s hyping of this report can be fairly described as fear mongering. The SELC can do better.

Update: The SELC objects to my characterization of the study. The application of drinking water standards occurs only as a first step of the report as a way to screen out contaminants that need not be considered and focus on the ones that pose a threat to health and the environment. The second step adopts a standard EPA methodology. Read more about their reaction here.

This entry was posted in Environment and tagged Coal ash, James A. Bacon. Bookmark the permalink.