Would a Mobile Crisis Team Have Saved Marcus-David Peters? 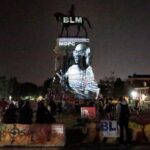 Image of Marcus-David Peters projected onto the Lee Monument.

Marcus-David Peters, fatally shot in 2018 by a Richmond police officer while in the midst of a mental health crisis, has become an icon for criminal justice reform in Virginia. Protesters occupying the area around the Lee statue on Monument Avenue erected a sign (since removed) designating Lee Circle as Marcus-David Peters Circle. Lawmakers named the “Marcus-David Alert” bill after him, requiring all police departments by 2026 to dispatch mental health professionals to emergency situations involving people in mental distress.

The story of how Peters, an unarmed black man, met his demise is a tragic one, and tales like it are all too common. Many police-civilian encounters ending in violence involve people suffering from mental breakdowns. It makes intuitive sense to use trained mental-health professionals to talk them down from the ledge, so to speak, rather than relying on police officers trained primarily in the use of force.

But a close look at how the Peters tragedy unfolded raises questions. Given the rapidity with which events unfolded, would a “mobile crisis team” have made a difference? Would putting mental health professionals into the front line of law enforcement have put their lives in danger?

It so happens that new details of the Peters episode have been laid bare after an in-depth review, released last week, by Richmond Commonwealth’s Attorney Colette W. McEachin.

Peters, a 24-year-old high school teacher, was shot twice when he charged Officer Michael Nyantakyi. Richmond anti-police activists argued that Peters “needed help, not death.” A review by the previous commonwealth’s attorney, Michael Herring, had found the police action to be justified. But amid the massive protests following the George Floyd killing, Peters’ family and local activists called for a new review. McEachin’s report incorporated new evidence from the police department’s Taser instructor and an examination of Nyantakyi’s body camera. Her conclusion: “The officer’s ultimate decision to use lethal force was a reasonable response to the imminent danger presented to himself and the public by Mr. Peters’ continued violent behavior due to his mental deterioration.”

I cannot find a copy of McEachin’s report online, so, for the narrative that follows, I rely upon the account in the Richmond Times-Dispatch.

The incident. Peters’ deteriorating mental health apparently had started one to two weeks prior to his death, and his family had expressed concerns about it. The incident in question began around 5:22 p.m. when Peters arrived at the Jefferson Hotel, where he had a part-time job, removed his shirt in the hotel lobby, and had words with another employee. Shortly thereafter, he ran completely naked from the hotel, hopped into his car and drove off. After rear-ending three vehicles, he veered off a nearby Interstate ramp.

Nyantakyi, who observed Peters rear-ending the cars, followed in pursuit to the final crash site. Having undergone CIT (Crisis Intervention Team) training, he immediately recognized that Peters was unstable. From the RTD account:

“With his service weapon drawn, he commanded the driver, later identified as Mr. Peters, to remain inside of the vehicle,” McEachin said in the report. “Mr. Peters can be seen and heard yelling, flailing his arms around, and moving his head fervently from side to side. He was so active that his movements caused the vehicle to rock from side to side. In his interview, the officer explained that he feared that Mr. Peters might be reaching for a weapon because he could see him reaching to the passenger side of the cabin. The officer radioed the Department of Emergency Communications (DEC) that the subject inside of the vehicle appeared to be mentally unstable.”

In footage from Nyantakyi’s body-worn camera, Peters was still naked when he exited his car. He climbed, feet first, out of the driver’s-side window — the door was operable, the report found — and was screaming nonsensically as he ran to the highway. He was struck by a passing car, causing him to fall into one of the lanes, where he rolled around and made “snow angels,” the reports said and footage showed.

“The officer further explained that he holstered his firearm and drew his yellow Taser as he moved closer to observe and check on Mr. Peters,” the report said. “Suddenly, Mr. Peters stood and faced the officer who was standing some feet away. He appeared agitated and yelled at the officer to ‘Back the [expletive] up.’ The officer backed up as Mr. Peters advanced. He explained to us that he was attempting to maintain distance between them and to stall in hopes that other units would arrive.

“Mr. Peters then yelled ‘Put that Taser down or I’ll kill you.’ The officer warned that he would deploy the Taser, but Mr. Peters continued to advance on the officer while yelling, ‘Die [expletive].’ The officer deployed his Taser striking Peters with one prong, but it had no effect.”

In his interview with prosecutors, Nyantakyi acknowledged Peters was unarmed, but “indicated that by this point, it was ‘an all-out fight between the two’ of them to gain control over his firearm. The officer further explained that he was wary of engaging hand to hand with Mr. Peters because of his erratic behavior, his unresponsiveness to pain, and fear that Mr. Peters might land on top of him,” the report said.

Seventy-six seconds elapsed between the time Peters climbed out of the the car window and the time that he was shot. “CIT officers are trained that communication and de-escalation of a volatile situation requires that the officer first establish a safe position for himself and the mentally-ill individual,” wrote McEachin. “There was no time when both the officer and Mr. Peters were in a safe position to make communication and de-escalation possible.”

The counter-factual. Let us conjecture what might have happened if the Richmond Department had fielded a crisis response team.

Given his behavior at the Jefferson Hotel, there would have been little doubt that Peters was having a mental health crisis. This would have been the perfect occasion for the crisis response team to surge into action. But how might that have transpired?

Let’s say someone at the Jefferson Hotel had alerted the police. Where would it have dispatched the crisis response team — to the hotel? Peters had already fled.

Nyantakyi was the one who saw the car crashes and followed Peters. Evidently, he possessed no knowledge of the preceding events at the Jefferson Hotel. He had no way of knowing during the pursuit that Peters was suffering a mental breakdown and no reason to summon the crisis response team.

Upon arriving at the scene, Nyantakyi quickly deduced from Peters’ behavior that he was experiencing a mental health crisis. Let’s say he then called the response team and waited for it to arrive. What would have happened?

Events appear to have unfolded so rapidly — 76 seconds — that the team likely would not have had time to get there before the crisis escalated. Nyantakyi was forced into action by Peters’ aggressive behavior. When his Taser failed, he shot Peters in self defense.

Another alternative scenario: Let’s imagine that the mental health response team had arrived before police officers did. What if someone had tried to engage Peters and he assaulted him (or her) and there was no armed officer to stop him?

No two situations involving the mentally ill are ever the same. But they all share one thing in common: They are potentially volatile, and they potentially could end in violence.

Thinking it through. What can we conclude from this mental exercise? First, in many instances, the crisis team will not always be the first responders. Police officers will be forced to act in time-compressed situations. Second, team members sometimes will put themselves to risk of violence, especially if they are the first responders. How many crisis team members will join police officers among those assaulted and/or killed in the line of duty?

Hopefully, police departments around the country will learn from experience. Hopefully, police teams will get better at what they do. But out there in the nitty-gritty real world, question how much outcomes will improve.  Still, we won’t know unless we try it. Let’s make every effort to make it work as well as it can, track the outcomes, expand the program if it succeeds, and pull the plug if it fails.

This entry was posted in Crime , corrections and law enforcement, Mental illness, Uncategorized and tagged James A. Bacon. Bookmark the permalink.

37 responses to “Would a Mobile Crisis Team Have Saved Marcus-David Peters?”