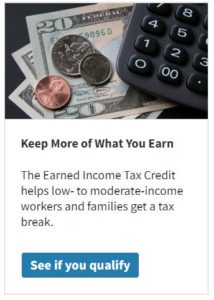 Lifted out of poverty.  Let that sink in a minute.  The writer of that sentence is admitting that the federal Earned Income Tax Credit lifts people out of poverty.  And it wasn’t even part of President Lyndon Johnsons’ Great Society but was enacted in the era of GOP Presidents Richard Nixon and Gerald Ford.

I lifted the sentence out of a report on the website of the Commonwealth Institute for Fiscal Analysis, which was called to my attention by a piece  distributed this morning by Virginia Mercury.  The people at the Commonwealth Institute also recognize that Virginia is poised for a long-needed discussion on tax policy, thanks to the opportunity provided by the major changes at the federal level.   It would be a perfect time to discuss again a refundable state version of the EITC, which the state has resisted because of the cost.

The federal EITC is refundable, meaning if the taxpayer has not paid in as much in taxes as the credit, the unused balance of the credit is paid out in cash just like a refund.  Virginia’s EITC is just a credit, and if the credit is larger than the tax owed the tax bill goes to zero but there is no cash-back refund.

The 2018 General Assembly defeated the most recent effort to convert the credit, House Bill 716.  The fiscal impact statement put on an incredibly high quarter-billion dollar price tag, which I suspect is wrong.  If it is not inflated, Virginia should be ashamed it is taking that much tax away from low-income families.

The Commonwealth Institute report noted that just over 80 percent of eligible Virginia taxpayers are claiming the federal credit, meaning almost 20 percent are ignoring it.  Even without converting it, it probably makes sense to get more people to file.  The size of the credit is tied to income and family size, and it’s possible many of the people taking a pass wouldn’t have much of a credit anyway.

When it suits some advocates for low-income programs, they ignore the real value of existing efforts that do provide cash or services to that population.  Note that the child tax credit is also mentioned as important, and other programs not listed keep people above abject poverty abound, supplemented by private efforts. Do the poor have it easy in this country?  Hardly.  But the entire picture needs to be seen.

As Virginia stumbles quietly toward a tax debate over whether and how to conform to the new IRS rules, a state refundable EITC deserves to be one of the big ideas.