Katherine Rowe took the helm of The College of William & Mary July 1, 2018. In three-and-a-half years as president, she has replaced most of the deans and senior administrators carried over from the tenure of her revered predecessor W. Taylor Revely III. The overhaul is summarized in the graphic below, created by a W&M source who asks not to be identified. 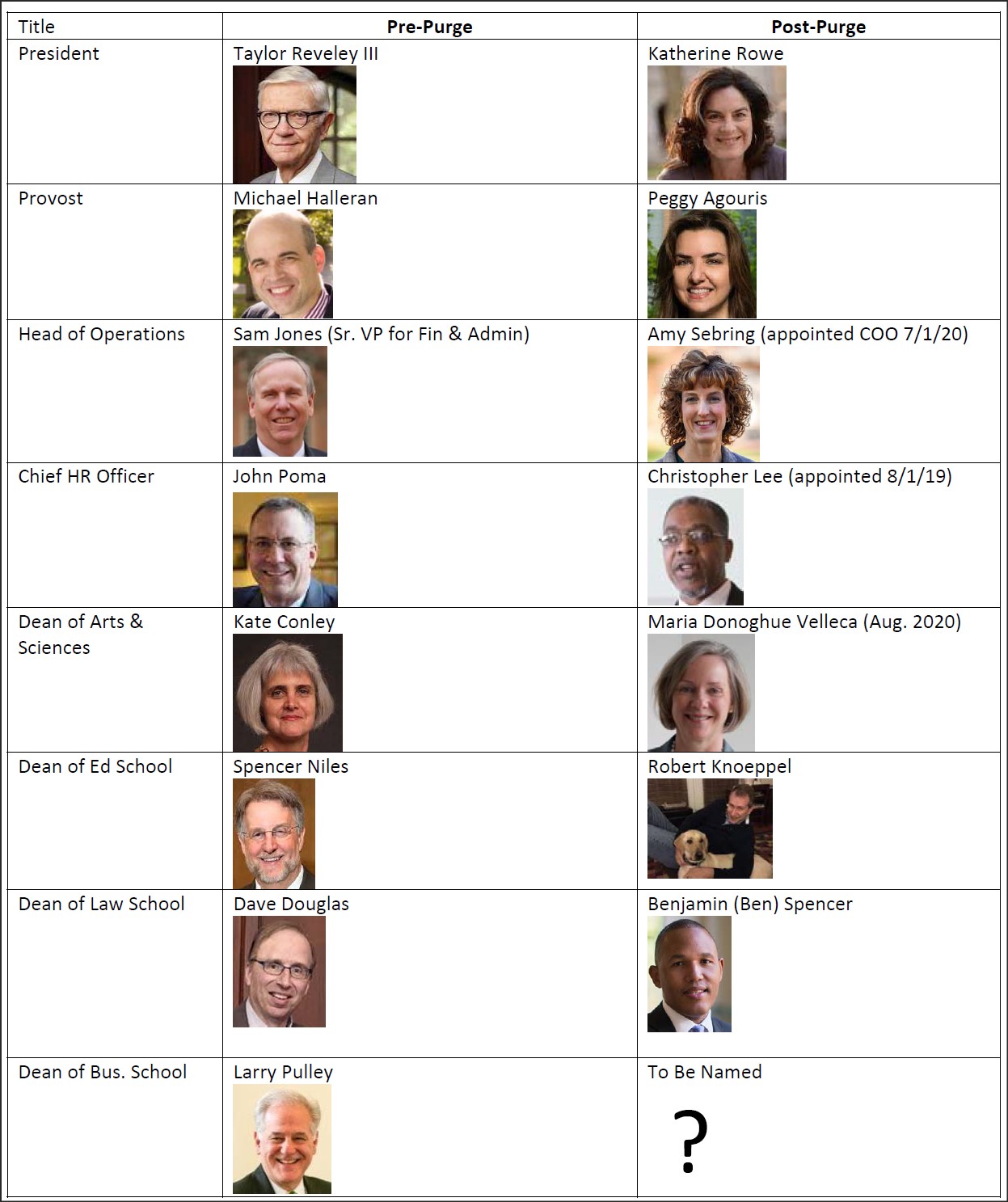 Business School Dean Larry Pulley announced his resignation earlier this month. No replacement has been announced.

It is common for university presidents to replace senior officials with newcomers who reflect their priorities. In this case, achieving “diversity” appears to be a top consideration. Of the six major appointments, only one is a White male. That would be totally fine if the new appointees are the best-qualified people for their jobs. Are they?

William & Mary is ranked by U.S. News & World-Report‘s 2022 Best Colleges survey as the 38th best “national” university in the country. Below I list the university and its ranking of where W&M’s new leaders came from, as well as their previous titles.

It is unsurprising that W&M would recruit candidates who held less lofty positions or worked at less prestigious institutions. Every candidate wants to advance his or her career by moving to a more prestigious institution or by occupying a position that offers more pay and prestige. W&M is not likely to poach many top administrators from Harvard, Yale or Stanford. The same is true for every public institution in Virginia. Moreover, it’s not as if Ivy League schools have all the academic talent. There are plenty of great people at less illustrious schools.

That said, my first question is this: did Rowe pick the best people W&M could find, or did she have to delve deeper into the prospect pool, settling for less- credentialed and less-accomplished candidates to hit her diversity and ideological objectives?

I honestly don’t know the answer, but given the fixation on Diversity, Equity & Inclusion in higher-ed today, it’s a fair question.

The second question is this: have Rowe’s selections increased the leftist ideological orthodoxy at W&M or contributed to intellectual heterogeneity?

The purpose of this post is to raise questions. I invite reader responses and commentary. I would love to hear from those with first-hand knowledge of the internal politics at W&M.

This entry was posted in Education (higher ed), Uncategorized and tagged James A. Bacon, William & Mary. Bookmark the permalink.