Will Pregnant Women Go the Way of the Gypsy Moth?

When I want to know what’s going on in Virginia, I usually turn to The Richmond-Times Dispatch.

Despite cutbacks that have plagued the entire newspaper industry, the TD continues a tradition of good journalism without a glaring agenda or obvious slant on its news pages.

The paper’s coverage of the parole board scandal has been excellent. And it has always been the gold standard for political news out of the capital.

But a story on Tuesday pushed all of my buttons, because I cling to the quaint notion that language matters and it should retain some of its grace, color and accuracy. 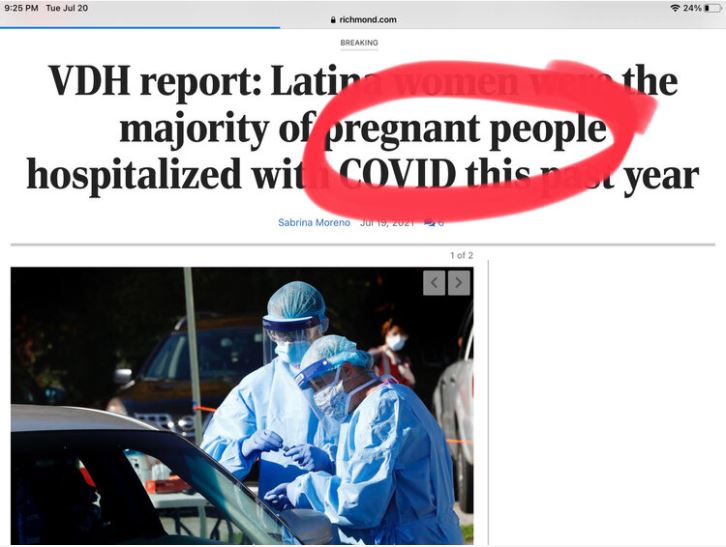 Yep, pregnant people. That ridiculous term appeared at least five times in the article. My eye was twitching by the time I finished reading. I may have miscounted.

There was a time — not long ago — when the word pregnant was almost always followed by “woman” or “women.” After all, females are the ones who give birth.

But in the woke world, in which we’re lectured daily that we must “follow the science,” there are those who believe that it’s hurtful to imply that pregnancy is the purview of women.

This reporter did her best to write around the “w” word although she was forced to use it a few times. Once in a quote.

And of course, the ever popular pregnant people.

Disinfection of the English language is everywhere.

Earlier this month, for instance, The New York Times reported that the Entomological Society of America was renaming the gypsy moth because the term “gypsy” was offensive to the Romani people.

“If people are feeling excluded because of what we call something, that’s not acceptable,” Michelle Smith, the society’s president, said. “We’re going to make changes to be a welcoming and inclusive society for all entomologists.”

As best I can tell the insect formerly known as the gypsy moth will henceforth be known by its formal title: Lymantria dispar.

Buckle up, bug lovers. There is more to come. A Better Names Project was just formed by the society to remove all offensive monikers from insects.

Not to be outdone, birders are getting in on the act. The American Ornithological Society just removed the name of a Confederate general from a species of bird.

Will the Blue-footed Booby be the next to get a new name? Surely that’s offensive to someone.

A couple of years ago, the City of Berkeley, CA passed an ordinance cleansing all gender references from the municipal code, no matter how nutty the result.

An ombudsman became an “ombuds.”

A repairman became a “repairer.”

Yep, it all started in Berkeley. Anyone surprised?