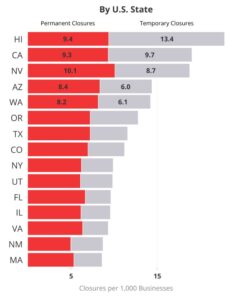 Closures per 1,000 businesses between March and September 2020. Source: Yelp

The economic disruption engendered by the COVID-19 lockdowns has provided ample content for that journalistic staple, the hard-luck story. We see a couple of examples in today’s news. The Richmond Times-Dispatch tells the tale of Jessica Corbett, working mother of three kids, who lost her job as a meeting planner and saw her income drop to zero. The Winchester Star recounts how Damesha Emener, who was laid off from her office job in Maryland, moved with her family to Winchester only to have her husband lose the job he’d found with a local manufacturer. Predictably, both stories tout the benefit of the latest federal COVID relief package in helping these mothers and their families keep their heads above water.

In my trip to the Blue Ridge Mountains over the weekend, I stayed at a hotel that normally served dinner to its guests but had to close its evening kitchen because it couldn’t find a chef. As a substitute, the hoteliers offered the menus of local restaurants so guests could order pick-up or delivery. I tried to put in an order with a local Italian eatery but no one picked up the phone. The owner had had troubling finding help, the hotel manager told me, and that’s probably why the restaurant closed.

The hotel manager did not know that I was a journalist and had no idea that she might be quoted, so I will not mention her name or that of her hotel. But she got quite animated on the subject.

An inability to hire workers is crippling the small business sector, not just in her town but the whole region, she said. The laundering service that cleans the hotel linens has the same tale of woe. She gave other examples, but I wasn’t taking notes so I can’t recite all of them. Rightly or wrongly, she was convinced that with federal relief many Virginians think they are better off financially by not working. They interview for one job a week as the Virginia Employment Commission requires, but they’re not seriously looking for work.

The retail, hospitality and restaurant sectors were the hardest hit last year. The conventional thinking is that the loss of customers as people sheltered from the epidemic is what caused most small businesses to shutter their doors. But labor availability may be an unappreciated factor.

The data on business startups and closing show a mixed bag across the United States. Some states have seen an increase in new business applications over the past year (February to February) and some states have shown a decline. The Mid-Atlantic and Northeast are among the weakest regions, with Virginia showing a 3.5% decline in year-over-year applications.

Business closings are harder to track month to month because small business operators don’t always file documents when they shutter their doors, and it’s hard to distinguish between permanent and temporary closings. Closings do show up eventually in tax filings and articles of incorporation. We’ll try to report that data when it becomes available.

If my hotel-manager friend is right about workers deciding that federal relief makes it more lucrative for thousands of Virginia workers to remain unemployed, massive federal “stimulus” money won’t do much to help job creation in Virginia’s most depressed business sectors. It wouldn’t be the first time that the “experts” in America’s ruling class enacted programs that backfired.