Why Whites Are More Hard-Line than Blacks about Blackface 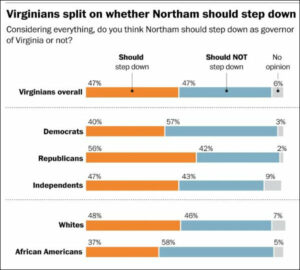 A Washington Post poll finds that Virginians are split about 50/50 on the question of whether Governor Ralph Northam should step down from office after revelations of his use of blackface during medical school some 35 years ago. The most fascinating finding within that poll was that whites are more likely (48%) than African-Americans (37%) to hold that position.

If whites are more outraged by the blackface incident than blacks, an interesting question arises: How much is white outrage driven by virtue signaling?

Blackface is racist, white people are told, because it demeans and humiliates black people. But in the grand scheme of things, how do the blackface revelations compare to all the other problems and challenges that African-Americans confront — you know, things like crime, terrible schools, the drug epidemic, child neglect and abuse, lack of job opportunities, and so on?

The Washington Post asked a question that could allow us to get at that question more directly: Were you offended by the photo?

The poll provided the 700 poll takers with options to describe the intensity of their feeling — “very,” “somewhat,” or “not” offended. Roughly one-third described themselves as “very” offended. It would have been great if the Washington Post had published a breakdown by race for this question, as it did for the Northam-resignation question. But assuming a strong correlation between those who declared themselves offended by blackface and those who thought Northam should resign, one can reasonably conjecture that blacks weren’t as “offended” as whites by the incident.

Assuming this analysis is correct, the obvious question, then, is why white people are more offended by blackface than blacks. After all, white people aren’t the victims of the unflattering depictions. The reason, I suggest, is that many whites, especially whites sharing a liberal/progressive ideology, are heavily invested in virtue signaling — affirming their good character and moral correctness by declaring their opposition to racism. That’s why many whites fixate on symbolic issues such as blackface and Civil War statues even while refusing to acknowledge how the failed social-engineering experiments of the Left have materially devastated African-Americans time after time.

That’s conjecture, of course. But there is a way for the WaPo to test my proposition: Break down the response by race to the “offended by the photo” question. If the preponderance of respondents who say they are “very” offended consist of white Democrats, then I’d say, “Case closed.”